Last night I received the latest Elliott Wave Theorist.   In it, Prechter made a cogent case that the entire rally from last March was a Wave 2 counter-trend rally.  "Was," because he thinks its over, or is at least within 100 DJIA points from being over.  Wave 3 down, shown below on my chart, will take most of 2010-2011 and  that the center of this wave down will occur later in 2010 and will, "set records for financial panics."  He goes on to say that the panic felt at the time of 9/11 and/or October 2008 will pale in comparison to the financial panic at the center of Wave 3 Down. 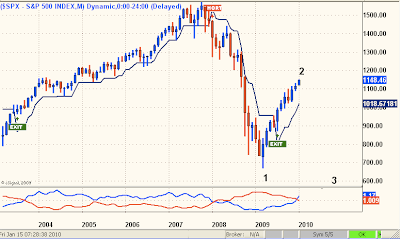 My SPX Trend Model which tracts the market with Hourly, Daily and Weekly time periods is designed to identify and join in any such market crash and panic. If the market runs up instead, it grabs those points as well.


Find something that works.  Then prosper from it.

Prechter, BAM, etc have been predicting this since last August.
I'll just wait for SPY model to go short vice trying to predict the market.
The market is always right.