The end of speculation?

"....The recent strong downside breadth as well as the downside leadership from the higher-beta secondary indexes indicate that the most intense phase of the bear market to date is starting.....This time, all of the more speculative stock indexes, including the S&P Small Cap 600, the Russell 2000, the Value Line, and the NASDAQ, are charging ahead on the downside; this old fashioned stock behavior is probably an early sign that the optimistic bias of the past decade is finally about to yield."

My charts below support this premise: 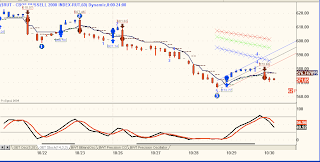 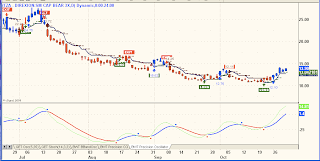 ERY is a 3X leveraged bearish energy ETF. It trades fast and furious, but if you get it right, the returns are worth the risk:

All of the following charts are exhibiting almost identical False Bar Stochastic patterns. Based on this pattern, the next few days are crucial for the Intermediate trend. Either prices fall back into an extended down trend, or, the market bounce from today will continue until prices get overbought toward the middle of next week. This observation may not answer how to trade through this period, but at least it provides some backdrop and perspective from which to deal with the days ahead.

On Sells, for now

Even if still Long, most are just another weak day away from triggering back Short

Note how the FBS has entered Trend mode 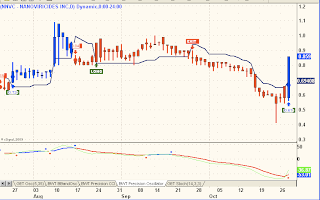 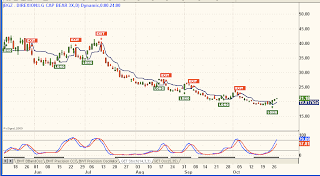 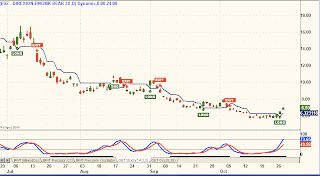 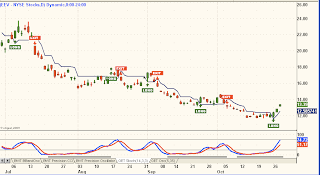 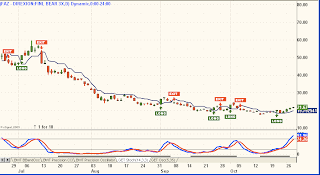 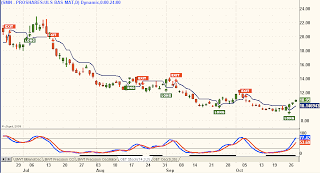 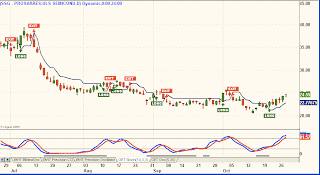 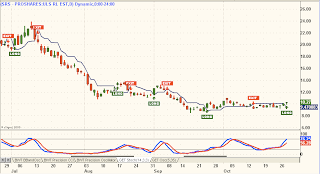 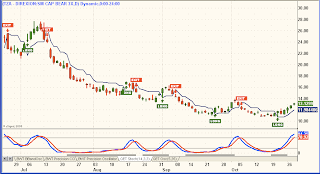 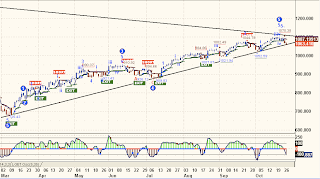 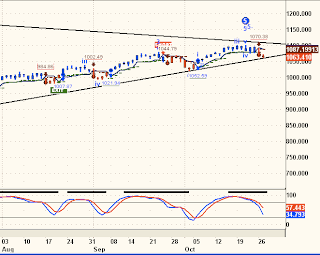 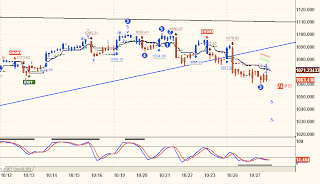 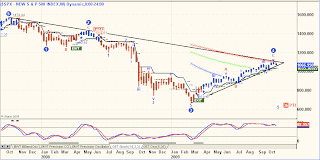 Earlier in the year this chart warned of another leg down in the equity markets that would challenge then exceed the March, 2009 lows. While the index rose 65% from early March, this chart kept me from significant participation in the rally. My bad.

Today the SPX is poised to confirm the Wave 5 Sell Signal by a drop through the rising trend line from early March and the BWT & ATR Sell thresholds. Those levels sit at approximately 1065 for the trend line, 1035 for BWT and 1030 for ATR. A confirmation for any of those thresholds requires a Weekly close below those levels.

Note that any such close this week will likely also trigger a False Bar Stochastic Sell Signal.

We finally got our SELL on the Daily SPX chart, basis both Blue Wave and ATR. The next major threshold lower is the upward trending support line from the March, 2009 lows. Once that gets taken out, the fun begins. 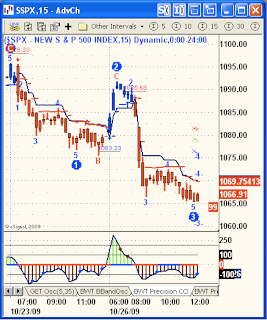 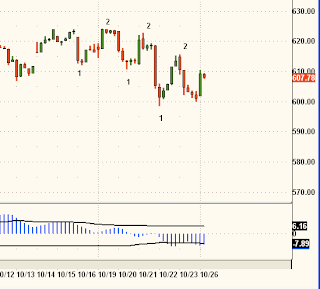 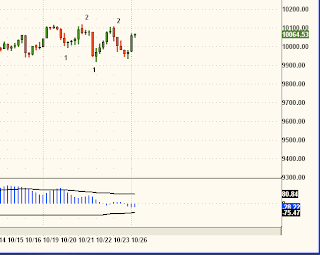 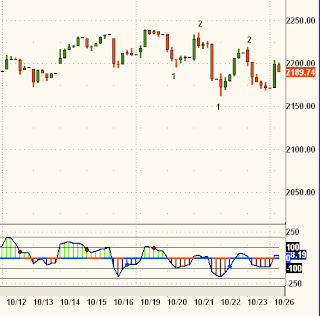 WEST HAVEN, Conn.--(BUSINESS WIRE)--NanoViricides, Inc. (OTC BB: NNVC.OB) (the "Company"), reports that the Company is well financed and its game changing anti-viral drug development programs are progressing successfully. As such, Management knows of no reason for the recent decline in stock price and associated volatility.

The Company announced that it has recently raised more than $4.3M in equity financing. The Company projects that this additional capital should be sufficient for at least 18 months of operations, or beyond December, 2010, at its current burn rate. In addition, as a result of strong and continued success in its anti-viral drug development programs, management believes that the Company has significantly improved access to the capital markets for additional funding that may be needed for financing IND studies.

Even more significantly the nanoviricide anti-HIV treatment was >25X (or >2,500%) more effective than the oral HAART treatment, on a drug load basis. The nanoviricide achieved these effects at a dosage level of only 150mg/kg, while the total HAART drug dosage was 4,200 mg/kg.

It is very important to note that no adverse events were observed in the nanoviricide treated mice, while the HAART-treated mice exhibited clinical signs of side effects.

The Company believes that HIVCide™ could very well result in a “Functional Cure” for HIV/AIDS, if these preliminary results are confirmed in further animal studies and in human clinical trials. In other words, HIVCide treatment could enable a HIV/AIDS patient to lead a completely disease-free life until an episode of hidden virus awakening from latent reservoirs occurs. HIV hides in immune cells forming latent reservoirs. It is widely believed in the scientific community that if these latent reservoirs could be wiped out then a complete cure for HIV/AIDS is possible.

The Company also detailed that it is now developing a single anti-influenza drug that is expected to be highly effective against all influenzas including swine flu (H1N1/2009), bird flu (H5N1), other pandemic capable highly pathogenic influenza viruses, as well as seasonal influenzas. The Company’s research over the past year enabled it to combine its separate drug programs for highly pathogenic influenzas, bird flu, and seasonal flu into one drug, FluCide™, to treat all influenza variants.

The Company has reported significant progress in its topical nanoviricide eye drops program. This drug is designed to treat most viral infections of the external eye, including adenoviral conjunctivitis (EKC) and herpes keratitis.

The Company also reported that it has successfully added a new anti-HSV drug program to its pipeline this year. The Company‘s topical anti-herpes drug candidate has already demonstrated greater than 10,000-fold (>99.99%, or >4 logs) reduction in virus quantity in cell culture models of HSV-1 infection. Animal model studies of topical and genital herpes are planned.

“We have already established a strong and robust drug pipeline,” said Anil R. Diwan, PhD, President of the Company, adding, “We now plan to focus on filing our first IND application as early as possible.”

NanoViricides, Inc. (www.nanoviricides.com) is a development stage company that is creating special purpose nanomaterials for viral therapy. The Company's novel nanoviricide™ class of drug candidates are designed to specifically attack enveloped virus particles and to dismantle them. The Company is developing drugs against a number of viral diseases including H1N1 swine flu, H5N1 bird flu, seasonal Influenza, HIV, oral and genital Herpes, viral diseases of the eye including EKC and herpes keratitis, Hepatitis C, Rabies, Dengue fever, and Ebola virus, among others.

This press release contains forward-looking statements that reflect the Company's current expectation regarding future events. Actual events could differ materially and substantially from those projected herein and depend on a number of factors. Certain statements in this release, and other written or oral statements made by NanoViricides, Inc. are “forward-looking statements” within the meaning of Section 27A of the Securities Act of 1933 and Section 21E of the Securities Exchange Act of 1934. You should not place undue reliance on forward-looking statements since they involve known and unknown risks, uncertainties and other factors which are, in some cases, beyond the Company's control and which could, and likely will, materially affect actual results, levels of activity, performance or achievements. The Company assumes no obligation to publicly update or revise these forward-looking statements for any reason, or to update the reasons actual results could differ materially from those anticipated in these forward-looking statements, even if new information becomes available in the future. Important factors that could cause actual results to differ materially from the company's expectations include, but are not limited to, those factors that are disclosed under the heading "Risk Factors" and elsewhere in documents filed by the company from time to time with the United States Securities and Exchange Commission and other regulatory authorities. Although it is not possible to predict or identify all such factors, they may include the following: demonstration and proof of principle in pre-clinical trials that a nanoviricide is safe and effective; successful development of our product candidates; our ability to seek and obtain regulatory approvals, including with respect to the indications we are seeking; the successful commercialization of our product candidates; and market acceptance of our products.
Posted by A at 6:04 AM 7 comments:

There have been a lot of requests for NNVC charts, so the lesson of this Blog is be careful what you ask for. I don't trade NNVC (I am a buy & holder, period), but if I did, this 240 minute chart has a nice combination of sizable winning trades without very many whipsaws. And guess what? It's bullish!

It works for many lower priced stocks. Here is a Daily chart of Gulf Resources, bought here at a 1-4 split adjusted cost of 88c:

What do these three charts have in common?

Not a bad time to take another look here. 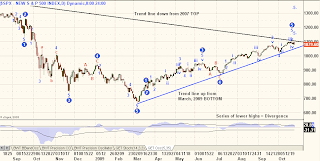 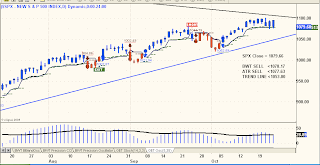 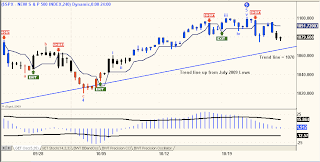 Trend line up from Summer Lows 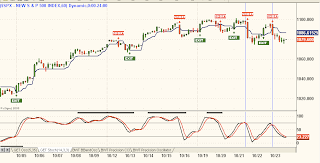 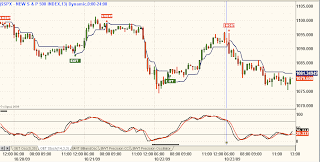