Sweep up
I've been sweepin' up the tips I've made
I've been livin' on Gatorade
Plannin' my getaway
Detroit, Detroit got a hell of a hockey team
Got a left-handed way
Of makin' a man sign up on that automotive dream
Oh yeah, oh yeah

Posted by A at 9:21 AM No comments: Links to this post

Who killed the Kennedy's?
When after all, it was you and me.
-Mick Jagger


Can't let today go by without my small, humble remembrance. It was a day everything changed and don't ask me to explain, because if you were not there, you will never understand. If you were, there is nothing else to say. That we have let the questions go on so long without answers, it is our bad. The killers walk among us.

Every year, without fail, the president dies all over again. For a few days every autumn, the entire media is overwhelmed by those haunting photos from Dallas. Those cruelly happy and innocent pictures of a young president smiling and waving at bystanders, the first lady clutching a bouquet of roses. With their soft, prelapsarian colors, they seem to hail from another universe—one that has been stolen from us.

Perhaps it is that feeling of loss that explains the lingering sense of grief over John F. Kennedy’s assassination year after year, when the anniversaries of other, equally shocking events—from Pearl Harbor to 9/11—are generally quieter affairs. But there is also something unfinished about Kennedy’s death, a lingering suspicion that no one has ever been able to banish.

The real JFK mystery, 50 years later: Why the infamous murder must be reinvestigated

Death of a visionary

Why are you here?

Why are you taking this course?


The three questions asked by Professor Manupelli on the first day of class, "Introduction to Cinematography," University of Michigan, circa, 1970.

After an hour of toying with us, stripping us of all ego and pretense, we walked out the door at the end of class with his voice bellowing the one answer to all three questions, "Art, for art's sake!" I will never forget that class, those questions, his answer, nor the enlightening poignancy of spending a semester learning from this man, teacher and artist.

In an interview he did in 2009, he said this about teaching film at U of M:

"I came here in ’62. The curriculum then was drawing, painting, design — period,” Manupelli said. “I tried to get them to do sound as design. You don’t need to be a musician to make music. I didn’t get to teach film for nine years, and (I worked) without pay; I took the deal because I wanted to get at the students.”

Here I am, 44 years later, one of the students in that room and one who will never forget the meaning of,

George Manupelli died in Bethlehem, New Hampshire, where he lived, on Sunday, Sept. 14 at age 82. He was a filmmaker, artist and professor at the University of Michigan School of Art and Design.


Death of a visionary 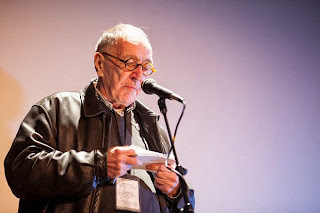 I loved you in the morning, our kisses deep and warm
Your hair upon the pillow like a sleepy golden storm
Yes, many loved before us, I know that we are not new
In city and in forest, they smiled like me and you
But now it's come to distances and both of us must try

Your eyes are soft with sorrow
Hey, that's no way to say goodbye

Posted by A at 7:53 AM No comments: Links to this post