Collateral damage is damage that is unintended or incidental to the intended outcome.

I sent out my Weekend Update earlier today, delayed by circumstances of a deeply personal nature that I have already detailed to my subscription list.  In the Update I set out eight Long recommendations, five of which were inverse ETF's should they reach certain price levels.  It is a dangerous game this our chosen vocation of ours and putting out recommended trades is something I take very seriously.  Explaining them, especially this weekend's trades, is my attempt to let you into my head, or at least a corner of it since exposure to all of it would be overwhelmingly disorienting, with collateral damage of an appalling catastrophic apocalypse. Nonetheless, for the curious rubberneckers among you, some clarity surrounds the chaos.

That said, let me borrow a theme from Robert Prechter's latest issue of Elliott Wave Theorist, where he discusses his trading philosophy:


".....every decision is a trade-off. No solution fits all people, and there is no perfect strategy.  EWT's recommendations express analytical conviction, and each trader or investor probably deals with it in a different way....I think our strategy---buying and selling at perceived price extremes---is the best approach for accumulating a position."

If you have been paying attention, we are into trend following which in effect, does the opposite.  We identify direction and go along for the ride without regard to perceived price extremes, tops, bottoms, or wave counts. Except, we do assess such matters in our gray masses and are aware of analysts like Prechter who from time to time identify perceived price extremes with compelling, persuasive and often extraordinary precision.

But he has also been wrong.  Which is it this time?  The beauty of trend following is we don't really care if he is right or wrong this time.  Our Trend Models will abandon a failed trend and latch upon the fresh new trend with their own uncanny precision.  The inverse ETF's recommended in the Weekend Update need to reach certain levels to trigger and if they do, that's sufficient cause for both of us to be right, Prechter & Harris, Wavester and Trend Follower, together at last.

The following Indexes are presented in what I consider to be very tradable formats, 240 Minute Trend Models.  I've omitted price levels, because some of you are paying for it and I'm not a complete idiot, you do in the end, get what you pay for.  There is enough here to get the idea of where we are, where we came from and where we may be going into the nearer term, one way, or another. 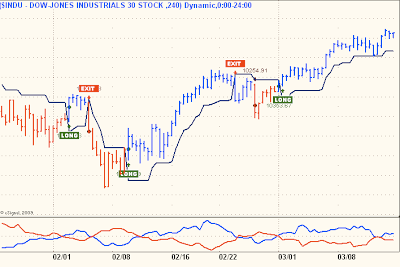 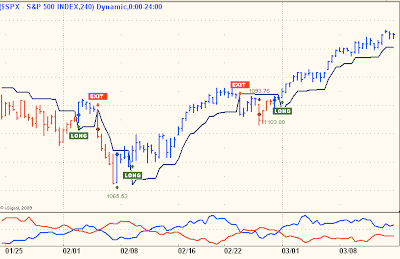 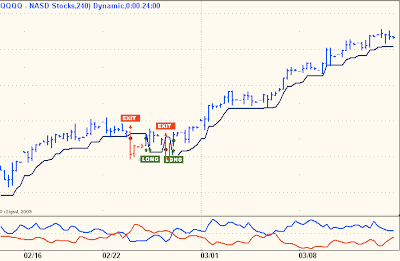 On the  QQQQ chart directly above, let's take a critical look at the 240m Trend Model and how it navigates through these trends.  The first Buy (not shown, way to the left side of the chart) was on February 8th at 43.00. The Exit for this trade (shown) was on February 23rd at 44.56. That 1.56 move on the QQQQ, amounted to 3.6%.   Take a look at the option tables, a deep-in-the-money near term option on the QQQQ on a 3.6% move in the index is worth about a 50-75% gain. Using a more conservative QID for the trade was worth in excess of 8%.

That was followed by two whipsaw signals, resulting in small but manageable losses.  Then look, another huge gain from 44.55 to 47.35.  another huge gain of over 6% in the underlying.  Do the math, this stuff does work, not perfect, but in the end a profitable edge, to say the least.


"That's about it for me today. It has been a rough ride over the past 72 hours and I am ready for a break from reality, but, indignation aside, reality is all we have.....so deal with it, Dude," thought Allan, turning his attention across a quiet room, to the sleeping, peaceful, healing, angel, who so blesses a path through his life.

Allan,is there any chance that you could add a word about the trading proceedure, regarding leveraged ETFs in terms of how a standard dollar transaction plays out,for those who might not have experience with trading such issues.

For example, I know that a 1 x inverse etf,is unleveraged, a 1000 dollars trade size incurring a 10 % loss will lose me 100 dollars.
If want to play a 2 x inverse etf... in order to establish the "same size" position...does that mean I only buy 500 dollars worth?

My main question is about trade size allocation on a 2 x issue. I dont want to buy a $2000 position thinking its 2000,and have it actually be like 4000.
I'm just confused about how it works . to place a 2 x trade at a desired portion size.

RE: how a standard dollar transaction plays out,

every ETF company provides information to address your question. And some provide mathematical examples. If you don't find what you need on the Direxion Funds website, then visit Powershares, Profunds, iShares websites.

these companies are acutely aware of the predicament of 2x and 3x leverage. And they are more than eager to talk on the phone regarding it.

Stay away if you are confused. They offer leverage somewhere between normal margin leverage and extreme option leverage. Its not an exact science, so there is no true dollar to dollar comparison. The benefit is you get more bang for your buck, but if you are wrong, its a self-inflicted wound. I like them because there is no time premium evaporating as in options. But options do allow a better dollar per dollar proforma, if that is important to you.

Discharged from hospital late this afternoon, father and daughter doing well, watching Desperate Housewives, whatever that is.

Once again, because I have said this before, Prechter can tell you what, but he can't tell you when. The reason for this is that the basic underpinnings of Elliott Wave Theory are not perfect. Like Random Markets Theory, Prechter embraces a shortcut, that markets always reflect the sum of human sentiment. Although that shortcut usually is very useful, it can destroy you in extreme times like these. Random Markets Theory was a useful rule of thumb, but it busted two Nobel laureates who took it too literally. The fiction that price always reflects the sum of market sentiment is an equally satisfying fiction. There is unequal access to information and people don't know what to think. This leaves the market succeptible to manipulation. With the Fed and the Treasury doing everything in their power to bolster the markets (and most likely, things they have no authority at all to do) can you really embrace the concept that markets ALWAYS reflect investor sentiment?

In all deference to Mr. Prechter, widely participated markets, like the S&P 500 index, generally DO reflect the sum of market sentiment. BUT, when the Fed, the Treasury, or some other baby Huey jumps into the pond, thinking they are doing us all a favor, that reflection becomes wavy.

Prechter is smarter than I, but that doesn't mean he is wiser. EWT is being distorted by market manipulation on a massive scale. The opinions of mom and pop investors sitting on the sidelines are irrelevant. As long as the big money has confidence that the government manipulators will continue to run up price on low volume, they are all in. When Jesse Livermore's stock pools manipulated supply and demand in a stock that some big players wanted to distribute, did THAT reflect the sum of market sentiment or did that reflect circumstances as they existed at that very moment?

EWT is a astrolab with which to pilot your ship, it can't tell you where the rocks are hidden. I am also a subscriber to Prechter's service, I have read most of his books, and I am a big fan. That being said, EWT is just a tool, not a religion. Tools work in some instances and not in others.