I just sent out the following message to my private email list and since I did good here, I'm going to share it with everyone, sort of a marketing thing.   All you need to know is that on Saturday I sent out a "Weekend Update"  two Long ideas and three Short ideas for the coming week.  AIG was one of the Short ideas.

We may have stumbled into a nice trade here with AIG.  Attached below are the Daily and Weekly charts which I hope should make my point simply by observation.

Today's trade was to Short AIG at or near the Open @ 27.96.  It finished the day on its lows at 25.78, for a gain of about 7.7%.  Respectable, yes, but these two charts taken together suggest much lower prices ahead.  A test of the early February low of 21.54 seems possible here and if that gets easily taken out, we need to take a real hard look at the possibilities of AIG in single digits again.

We will never know when one of these "Trades of the Week" turns into a blockbuster trade, but some will, its inevitable.  Whether its AIG or not, we will soon find out.  Although it looks weaker here to me, just in case, keep a stop at about your entry price, or at the Reversal trigger on the Daily chart which is tonight at 27.54. 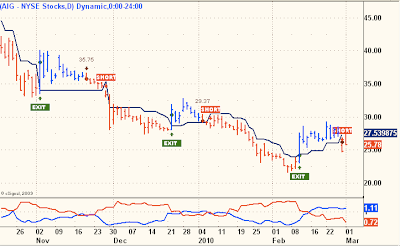 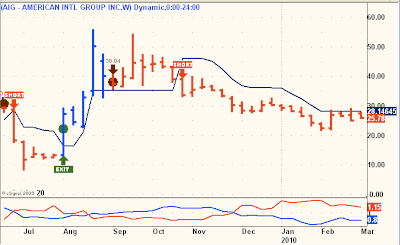 Timing is Ripe for a Reversal (Down) anytime from here.

Conversely.....
IF the magical beautiful plunge protection team of government wall street wizards of the new normal reality.....INTEND.... to Engineer a ....'movin on up' market,instead of what ought to occur in a real reality..... then I see this in the S+P chart instead...

IF they Hold price at and above 1080,stretch it out for a week or two,sideways is fine,they will be creating a "cup and handle pattern" (take a look at it)....which suggests a further move UP to retest the market high of 1150 and beyond.

SPOT on with AIG Allan!!!! Gary

Tuesday morning.
After achieving a high last week,and at a target
zone (1.37-1.40) NNVC would be expected to correct,at least moderately if not strongly,especially in this cycle zone for strong reversal energy.

From monday and now today, strong correction is not happening so far. doesnt mean it wont in the coming days,but the impulse energy is not blasting out of the gate after this big move up from feb 5 low.

Looking at the daily chart for NNVC in fact seems to show what could be wave 4 in progress bouncing around the 1.30 support...holding so far...and may find a wave 5 going higher still before the correction happens.
Maybe 1.40-150 would be a higher target ....or the higher targets mentioned by others ,in the 1.60-1.70
area..... and then the correction.
Cycle timing I follow suggests reversal time is now,this week,versus next week.

So I'm cautious of a large wave up to 1.70 at the moment. More akin to the drop upon strong resistance wherever it happens(1.40?)
in the next few days
for reversal down.
would be my guess.

longer term low is possible below .89 ,to the .70's even but too far away to predict.