Here are my two Hourly Trend Models, followed by a possible target for this counter-trend rally. 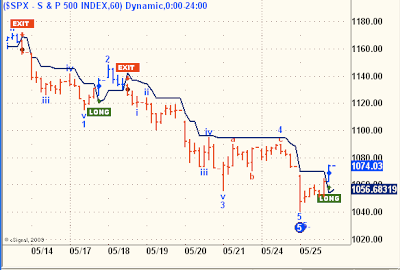 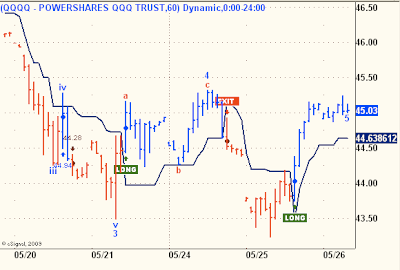 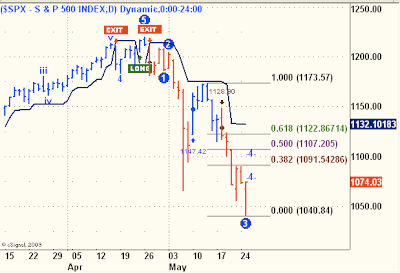 It's the third chart that is operative for strategy here, awaiting a move up into Fibonacci resistance followed by a reversal of the Hourly Models from LONG to SHORT.

In another world,with alternate vision,based on what the market movement did the last 2 days,

precise elliott and fibonnacci numbers and trendlines could bring tomorrow down to the critical point of s+p 1057,1058 (62 % correction).

as the line in the sand
where market Must Hold
and whipsaw back UP.
if the market plans to trend UP.

The cycle timing zone in these next two days

Beware of jumping on the next big movement you see in these next two days. The first wave will be the fakeout. the last one before the weekend will be the real one.

it is possible that the sell-off near the close was the market's way of setting a bear trap. Because in order to make a rally, the market will need massive short covering. If sufficient bears got lured in at end of day, then the yule-log is on the rack.

The kindling is Wed's economic numbers, however fabricated.

The tinder upon which to ignite the rally would be BP success (however tentative) at plugging the hole.

if the market does not rally, then no bears got trapped. It is all scouts frolicking fun at snipe hunting.

I agree with that.
I just took a look at the NNVC chart. put this in the for whatitz worth category.

From the sharp drop bottom and blast up top on the 21 st last friday ,as wave 1 going up, followed by the last 3 days as an abc wave 2 down, the movement did an abc jig, ....I could venture a wild guess that thursday could see a giant blast of wave 3 UP just like last friday . target the 2.20 area. then holding up 2.00 and finish the week around 2.30

If this happens I will crown myself king of TA.

I'm not seeing this kind of bold bullish action in other stocks so far,but the NNVC chart looks like a coiled serpent ready for a wave 3 blast.

It Didnt happen.
I humbly wear no crown.

I just had a curious contrarian thought about the greater market psychology.
I'm right in the middle of reading an article by a columnist,Paul Farrell,on marketwatch,dated 3 days ago(so it was before the giant surge Upside of the last two days).

He was saying ...no,shouting,the sky is about to crash down and we must sell everything ,go to cash, asap.
I'll finish reading the article,but in the middle of it I got hit with this one thought and it was intuitively correct enough that I had to come here and post it.
Take it for what itz worth.

2 years ago,before the september crash,or maybe label it as starting in the spring,whatever,
there were certainly a few notable experts who Saw It Coming and warned folks.
Peter Schiff, Marc Faber, Roubini,J.S.Kim, etc.

If you were a full time trader/investor,sitting at your computer all day, you might have seen it coming,yourself ...and got out in time.

But many analysts,investors,managers,and talking heads failed to see it coming and got burned.

Now,here is this commentator screaming chicken little,3 days ago,at the market,s last bottom (impecable timing right there for you)

and here was my compelling thought

How many folks who Failed to see the crash of 2008 coming....and now so Hair Trigger Sensitive to the trauma and pain from it, that they are now permanently on High Alert,at all times, for the rush to the exits at the least downward signal.

Ask yourself this question. every trader and investor owes it to himself to ask that question and give yourself an honest answer.

Are you hair trigger sensitive to every moment of a downward impulse,or break of a trendline,or some elliott wave count that looks bad...and that causes a rush of adrenaline in your survival instinct.

The last 2 times ,I decided to ride out the correction,from Mid January to Feb 5 drop....watched the profits disolve and then watched them more than double going back upside into april.

Its always a debatable decision whether to sell or hold or play hedges,and when to enter ,when to exit, etc... I think a good trader is among all things, also a good guesser.

Even now, its a guess where the market will go next week.

They may be right.I have no idea.
I just have this question.

I dont want to be controlled by any hair trigger fear.I want to be neutral.always neutral.

Until theS+P drops below 1040,I'm seeing the trendline that cuts through the July low as an uptrend line.
I'm seeing a Range evolving between 1220 and 1020 with 1120 in between.
I'm looking to lock in gains and move more to cash around 1120,but I'm not wanting to press the panic button.or cry chicken little.

If there is a major war,or anything geo-politically insane like that between now and this fall ...all bets are off.