A chart with no name 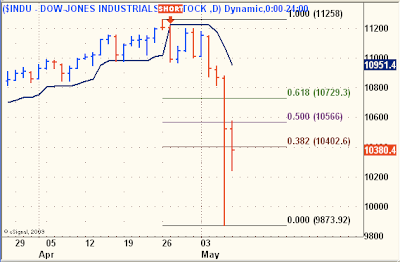 What is your take on the bounce this morning? Can your trend keep up with the madness that appears to be starting?

enjoy your time here in Vegas

My take: the shorts are nervous, wanting to bail on their position because, "Europe is solved" and bull market is back.

well, this could be wave 2, a near perfect fib retracement (.62) of wave 1 (talking waves 1 and 2 down here). However, other counts are certainly possible here, some of which are bullish. Rather than betting on one of the counts, the odds favor sticking with your trend following system.

The beauty of the trend following models is that there is no analysis, just one simple trend line with prices on one side of the trend, or the other. Frees up time to speculate on things like Elliott Waves and horses names Fibonacci.

If we consider the possibility that the market will defy the elliott gods once again,and this becomes the start of a new wave up

to a new high

and we start from the low of thursdays plunge... and
count that rocket recovery move to 1138 as wave 1

this morning opened with that wave 3 of 3 blasting up. that has to be called a wave 3 movement.

its not hard to figure it all out. its easy really.

lets call that 70 points for simple math.
the formula for target top is 162% of that move.


aside from all this TA math

its all a big guessing game.

its all in the hands of god
and GS.

I guess we need to see how the rest of the price action goes in the next few days.holding up at support around 1138 1130(s+p) area would be bullish for continuation.

and then ,if failing to break above 1160 could be bearish for more down.

Everything is up right now,of course,

the other miners are up normal - 4%,like the market.

Is these the numbers you are using lately? Do you adjust them chart to chart?

I'm pretty sure it doesn't matter all that much over the long run, so pick the multiplier that triggers a frequency of trades that fits your trading style.

If I were starting over, I'd probably opt for a 3.5 or 4.0 multiplier for all stocks, fewer trades, but less management needed.