This shelf offering has been hanging over the stock price for weeks.  With it now out of the way, what can we expect next?  Apart from a pending AMEX up-listing, there are a lot of irons in the fire for NanoViricides, particularly coming out of the lab in multiple locations across different anti-viral targets.  If there was anything bad to report, it would have had to have been disclosed to the above $5M investor.  The fact that the investment went forward, we can fairly deduce that there is no bad news looming, which suggests good news, maybe very good news is coming next. 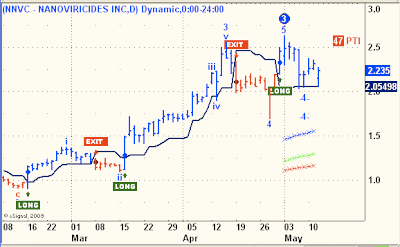 Aeterna Zentaris Inc. (NASDAQ: AEZS, TSX: AEZ) (the "Company"), a late-stage drug development company specialized in oncology and endocrine therapy, today announced that the U.S. Food and Drug Administration (FDA) has approved the Company's Investigational New Drug (IND) application for its doxorubicin targeted conjugate compound, AEZS-108, in luteinizing hormone releasing hormone (LHRH) receptor positive urothelial (bladder) cancer. Following this approval from the FDA, the Company expects to initiate a Phase 2 clinical trial in this indication in the second half of this year.


AEZS's market cap is $130M, an anomaly that presents investors with an incredibly enticing risk:reward opportunity. 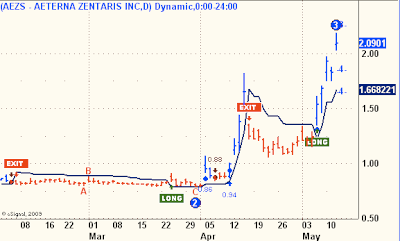 youre right up on it allan. good work.

Re: "If there was anything bad to report, it would have had to have been disclosed to the above $5M investor."

A) No, it would not. Drug companies withold unflattering test results all the time. If they run ten tests and only two come out well, they release the results of those two. Common practice.

B) I doubt the new investor cares much about company news. The terms give them the right to buy shares at a percentage discount to the previous day's share price. Whether the share price is $10 or ten cents, headed up or headed down, they will make about the same percentage.

Actually, the structure will encourage them to sell shares while the stock is headed up - they make more on the stock sales that way. This deal is a rally killer. Not very good for small shareholders.

C) Pending AMEX listing? I can't find any announcement from the company that they have applied to AMEX. Got a link to that?

Here's a head start, but you will have to do your own research beyond this:

From Robert Lorsch, CEO of MMRF. Just substitute "Nanoviricides" for "Dendreon" and see how it reads....and feels:

When I look at a business opportunities I look for the social component of what a company does to give back to the universe. How does that company contribute in a way that can change the planet and save lives. Dendreon Corporation is a great example of my belief system at work. Put passion behind saving lives and look at the results that can be achieved.

Have you evr researched any of Seasides other investments ?

They've been talking about an uplisting for four years, I'll believe it when I see anything beyond talk:

RE: Seasde 88 financing deals knocks the wind out of stocks.

Look at EVERY other financing that was done by Seaside 88...GNBT, NVD, VLNC, CYTX. Every single one of those stock fell precipitously after the XX number of shares every two week financing.

Doesn't bode well for NNVC in my opinion.

agreed that seaside 88 has beaten up VLNC in the past with their convertible pref offerings. They have everything to gain from a lower conversion price ST in the days and weeks ahead. Caveat emptor ST imo

Who knows if Seaside has even started selling shares? The worst may be yet to come.

Not a fan of death spiral financing. The lower the price goes, the more shares they will have to sell to get their money back.

I believe you meant NVDL.OB did similar financing with Seaside. I agree, doesn't bode well for price performance.

Your mileage may vary, of course ;)

Posted by: OntaREEo Date: Monday, May 03, 2010 7:44:10 PM
In reply to: kashai who wrote msg# 81144 Post # of 81530
Kashai, since you are still researching, I thought I would take the liberty of providing a sort of overview and see if it helps you or other newer investors in any way. I am sure you will want to check me out, but IMO I am giving it to you straight. If you feel something here is counter to your conclusions, I would appreciate hearing about it, because perhaps one of us can learn something.

Let’s start with the with good news. First in that department, the management. Scott Keevil was born into mining. There are few if any better. IMO a lesser CEO could not properly handle a project of this caliber. I have had the good fortune to meet Scott on several occasions, and he is the real deal in every way. This item A++, let’s move on.

The property. Here the story just keeps getting better and better. Officially, based on 12 recent holes drilled, they have $3-$5 Billion of niobium in the Hawke Zone. In reality, the Hawke Zone has $10-$12 Billion based on historic drilling, 3D modeling, and qualified geologist estimates. The SE Zone likely has over $20B by the same process of estimation, including historic drilling. We have just learned of SE Zone 2, and with just a quick look at the aeromagnetic image, it could be the size of the first SE Zone. (One hole of drilling in SE2 has been announced so far.) Eventually, the deposits under the lake could double these land amounts, or perhaps $100B or

Note on the float: most of the shares are locked up as restricted, leaving only 300M in float. (last year a r/s with shareholders given restricted shares)

The 50MAvg is just about to kiss the 200MAvg for first time in years.

CWRM's iron ore is easily mined at surface and it is of high grade and unlike most majors it is easily deliverable to Pacific Ocean port for China destination.