A "perfect storm" is an expression that describes an event where a rare combination of circumstances will aggravate a situation drastically. 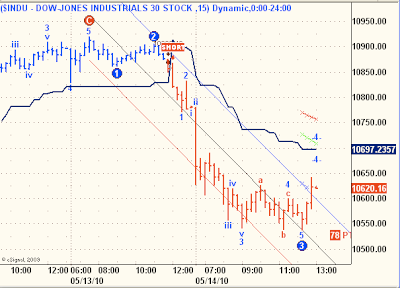 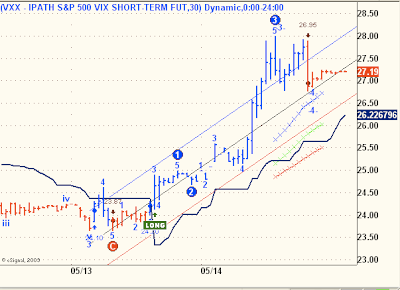 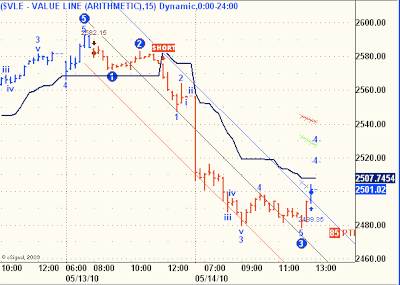 doesn't help that we're bleeding at the seafloor...

Life will go on as soon as the main crisis slows down. What people do not realize, it will be a completely different world from the one you used to live in.

Those who have prepared will make the transition, those who don’t will fall by the way side and become a casualty of the crisis.

Everyone is worried about EMP, or a Nuke attack and zombies. Can these things happen? Sure, well not the zombies, but the odds are pretty high to possibly not happening at all.

But the odds of a financial crisis hitting this country is very good. In fact I am going to say that it isn't a matter of "IF", it is a matter of "WHEN." continued

The elliott wave counting,as often happens, can be an "either this,or either that"

in these current chart counts,you show one of the possibilities....the down side,which shows,I think correctly, a completion of wave 3 and the ongoing wave 4 structure. You show the colored slash marks for wave 4 tops.

However, the other elliott count,that is also possible....is that an 'ABC' correction has completed,with the bottom of the may 6 plunge.
Immediately followed by the may 6 recovery as wave 1,followed by the wave 2 correction and completing the week with wave 3 which is ongoing. targeting the same slash marks on your chart.and to be followed by wave 4 and 5,in the ongoing bullish trend....to eventually hit a target in the 1250 zone of the S+P.(the index I follow most,so I have it in my head... I dont know what the target would be for the dow chart)

so there are the two scenarios.

My own instinct says that the government game controllers just got through engineering the recent plunge,and theyre not likely to play another trick like that this soon after.
it wouldnt suit their larger purposes to scare investors away from investing their money in the game.

So I'm guessing on the long side or at least sideways for a while.

but we wont know until we see what the next few days show us at these support resistance levels.

t said: "the government game controllers just got through engineering the recent plunge"

the May 6 plunge occurred when the Fed was being pressured with a real audit, they did the plunge as a warning shot. It worked, the audit they will get is toothless.

This said, ordinarily one should be looking ahead at the Nov elections. In light of this, they would want market to correct now so as to build up into this election with great fanfare.

But another thing is taking place. The international communists that Obama is part of want to take the whole system down in order to install a one world government and financial/currency system. And now is the time to do it because they are in power and also Europe is vulnerable. Also the health-care [sic.] passage and fortunes made at GS have emboldened them.

Everything is much clearer once one realizes they are not trying to fix anything. They are robbing it and then to trash it.

Its all plausible what you say.about scenarios and whats being engineered. or putting it another way,whats happening by the strangest unlikely coincidences. Its possible to observe some things in the news,connect a few dots,and get a feel for some idea.but its also probably impossible to fully know the elites game plan well enough to play the markets to ones advantage.
its like an outsider trying to get inside info by examining footprints of where the players were a week ago.

But it seems like we have to try and figure out at least a few things,just to decide where the safest place is to put our life savings.

I dont know what the answer is.
It seems like owning gold and silver is a good idea.
But if one suspects that the whole Game is rigged to fulfill some NWO agenda, what if they want americans to buy gold,because their plan at some point is to confiscate it?

Theres no end to the worry no matter where you turn,if there actually would be a plan to bring down the global economy to create a new world government.

The internet is full of all the theories one can imagine, backed by news,and videos,and historical perspective, and on and on.

I think what the internet freedom has given people,is a better glimpse of how corrupt politics,and wall street, and governments are.

They probably always have been,only we had no means to see it.

I always fear that governments are eager to wage war with each other.
and I wonder why they cant just cooperate in reasonable ways instead.

why must establishing a one world elite order be achieved through chaos, destruction,and conflict.

Has civilization evolved at all since the dark ages,really ?

Just finished watching the HBO miniseries THE PACIFIC. Man, what a bloodbath it was over there. Kind of like World War 1, Vietnam, The Civil War etc etc.

It's funny how much of the world believes in (and worships) some type of higher power. You know, like, say... God. And yet, generation after generation and civilization after civilization continue to operate in a way that none of our so called "Gods" actually endorse.

Greed, corruption, persecution, genocide, war... it's as if we're just scared animals - taking what we want, attacking those that disagree and all the while praising ourselves for our allegiance to our God. WTF?

That brings me in a roundabout way to what the Anon said above:

The international communists that Obama is part of want to take the whole system down in order to install a one world government and financial/currency system.

Now, I'm kind of disappointed in Obama, but I don't believe he's a communist and even if he is, well, is it really his fault? Afterall, aren't we all just pawns in a giant game of God-chess? I mean, you can't get elected junior high class treasurer without claiming to be a good God fearing American. And yet, when the world falls into total chaos over and over again, we decide to blame those who we're created in God's image - those that are just pawns in the game of chess... MEN.

What am I saying? It's one or the other. Either God exists and he/she/it apparently doesn't give two shits about us, or God doesn't exist and we need to deal with it. Personally, I'd vote for the latter (it's the only one that would hold up in court) but either way, we're all f$#%ked.

Why? Because man is f%$#ed up. Seriously... irreparably.

Oh, and T, what the hell is a "one world elite order"?

Steve, you don’t get! Man is a total Neanderthal (no profanity needed) because it is his inherent nature to be sinful. He cannot correct this by utilizing his own reasoning, it deceives him and keeps the wood plank imbedded in his eyes. All we can hope for is that our cries that “God help us all” will be answered!