Geopolitics is all over the map today, between Greece, the European Union, car bombs and oil slicks, the mix appears to be getting quite volatile.  Could one beneficiary of all of this be the precious metals?

Below are the Daily and Weekly Trend Models for SLV, the Silver ETF: 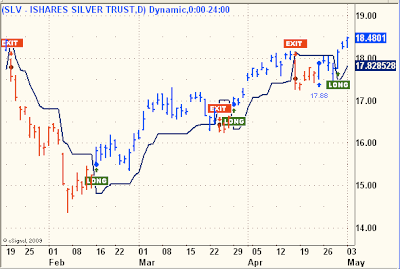 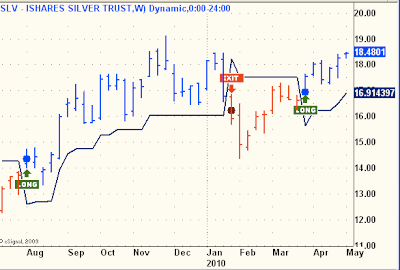 Here is a scary summary and perspective on all of this mayhem from Phil Davis of Phil's Stock World:

By Phil of Phil’s Stock World

Now we only have to worry about Austria, Belgium, France, Germany, Greece, Hungary, Italy, Ireland, Japan, Netherlands, Portugal and, of course, the UK - who all have WORSE Sovereign Debt to GDP ratios than Spain (who are up next on the "wall of worry" the markets are climbing) while we pretend that the US is in "good" shape because we "only" have $15Tn in debt on a $14Tn economy, which is how we, through the IMF, were able to write Greece a $20Bn check this weekend.

$146Bn given to Greece is almost 50% of Greece’s ENTIRE $339Bn GDP - now THAT’s a bailout!  Bailing out Spain’s $1.5Bn economy would force us all to dig just a little deeper, despite the lower ratio and bailing out Italy’s (same ratio as Greece) $2.1Tn economy might be a stretch so maybe we can help Belgium first ($470Bn) before we all get together and figure out what we’re going to do about Japan, who have a $5Tn economy that is $10Tn in debt yet somehow has had their bonds marked to fantasy for years.

16.5% of Japan’s tax revenues currently go to debt service (10% on interest alone) as the government borrows money at an average 1.3% (10-year rate) and you won’t here it from the happy, happy CNBC crew this morning (because Greece is "fixed" and Buffett says GS are REALLY nice guys) but Fitch released a report this weekend warning: "Japan is increasingly vulnerable to an adverse interest rate shock, given the scale of government debt and hence the volume of refinancing.  The lack of a coherent and credible plan" for fiscal discipline is likely to put downwards pressure on creditworthiness in the medium term."  According to the non-Murdoch London Telegraph:

Tokyo has until now been able to borrow at ultra-low rates of around 1.30pc for 10-year bonds, drawing on a huge captive savings pool from its own citizens. While this reduces the risk of a "temporary liquidity problem" – or `sudden death’ in ratings parlance – as foreigners cut off funding, it does not protect Japan from deeper forces at work.

"The slow but steady drop in the domestic savings rate could eventually undercut [Japan's] ability to fund itself locally at nominal yields and makes it more vulnerable to interest rate and refinancing risks," he said. Even at the current low rates – 0.16pc for two years, and 0.49pc for five years – interest payments already match 10pc of tax revenues. This is twice the average for OECD rich states. A sharp jump in yields would be ugly.

Tokyo stresses that "net" debt at 97pc of GDP is a better indicator of Japan’s health, since this takes into account the country’s assets at home and abroad. Fitch said these assets may prove illusory. A chunk equal to 38pc of GDP is in the form of lending to business. "It would be difficult to liquidate these assets in the event that [Japan] encountered payment stress, and the value of such assets is uncertain," it said. A second chunk worth 20pc is in foreign reserves, mostly US Treasuries. This could not be converted quickly into yen without causing currency havoc.

So if Japan had to borrow money for 10-years at the US 10-year rate of 3.89%, then their interest payments alone would be 30% of their GDP.  Well, thank goodness they are able to borrow an infinite amount of money at 1.3%, right?  And I love the way this works with 20% of Japan’s "assets" in the form of our Treasuries, so they borrow from their people at 1.3% and then buy our debt and collect 3.89% for a whopping 2.59% profit.  This all works great as long as the Yen (which they borrowed and have to pay back) doesn’t rise more than 2.59% against the dollar (which they will be collecting).  So you can see why the Nikkei gets so excited any morning the dollar is over 94 Yen and why they freak out when the dollar is below 92 Yen - Japan is a country that has bet it all on black and is just sitting there watching the little ball spin around the wheel with their fingers crossed.  Maybe David Blaine can help them…

Indeed we have developed an international gambling culture with all the Central Banks placing their bets and hoping their nation isn’t the next one that is asked by the IMF to make drastic changes in government spending in order to get loan approval.  Greece is cutting (supposedly) 14% of their GDP in spending, that would be almost $2Tn cut from the US’s $3.5Tn government budget or a $700Bn of Japan’s government spending, which would be 95% of it.  I guess this is the realization of the Republican dream. The shutdown of all governments seems imminent so, well-played my friends!

Have I mentioned I like guns and ammo lately?

Speaking of guns and ammo (unfortunately), New York City suffered it’s 11th terror attempt since 9/11 and, once again, it was better to be lucky than good as a car bomb that was driven to Times Square, set to explode, left there and triggered, failed to work.  It was only by luck that I wasn’t blocks away from there with my daughters as we went to NYC Saturday but changed our plans from a dinner in midtown to dinner in downtown simply because the Lincoln Tunnel was backed up going in.

Over the past year, on at least eight different occasions, people linked to radical Islamic thought attempted to carry out or carried out attacks on targets inside the U.S. That includes the failed Christmas Day bombing on board a Detroit-bound airliner, the shooting rampage at Ft. Hood in Texas, three separate bomb plots foiled by the Federal Bureau of Investigation last September, and a handful of earlier plots broken up last spring and summer.

Sometimes we forget why we have disaster protection in our portfolio as well as life protection (insurance) and fire protection, flood protection, etc. You need insurance. Granted a check from the insurance company would have been small consolation for my wife if my daughters and I had happened to decide to sit in the tunnel traffic and had parked at our favorite garage (5 blocks from the bomb) and had happened to be in our usual favorite places when a bomb actually went off. M&M World is on the corner or, even worse, we may have gone to stand in line for last-minute show tickets at Duffy Square, one block from the bomb at just about 6:30, when the most people are waiting for theaters to release their unused tickets.

It is also small consolation for your portfolio if you are unbalanced (see "Smart Portfolio Management") and overly bullish because you have not adequately insured against a disaster (see last week’s "Hedging for Disaster") and you have not adequately factored a "risk premium" into your stocks.  At PSW, we often target stocks that are "priced to perfection" for our short positions and my primary objection to the run-up to S&P 1,200 is that 1,200 is, in itself, priced to perfection and the global economy still seems far from perfect to me as well as the obvious possibility of another 9/11 or some other catastrophe, like an oil spill wiping out the entire Gulf of Mexico’s water economy.

The Nikkei was heading for a wipe out last week but the futures launched Japan’s market all the way back to 11,075 (up 150 points) and they kept 132 of them during the session to finish at 11,057, right back at last Monday’s open.  As I mentioned earlier, Japan is happy as long as the Yen is worth less and they will keep printing more Yen to buy Dollars faster than we can print Dollars to buy Yen for as long as this QE bubble can keep expanding - as long as nobody notices, we’ll all be just SUPER!

The Hang Seng didn’t get Japan’s memo and they gapped DOWN 1.5% and finished there for the day (down 297 points) while the Shanghai flatlined after a 50-point "stick save" into their close - which has pretty much been their pattern as their meltdown below the 200 dma continues unabated. There is a rumor that China may raise it’s reserve ratio requirement for the nation’s banks to 18 percent as the Government there seeks to reign in the inflation that the Government here tells us doesn’t exist.

Kind of puts our little selloff into perspective, doesn’t it?  Europe is having mixed results ahead of the US open with the FTSE closed for a holiday and the DAX flat and the CAC down 0.4%.  Everyone is crossing their fingers that the Euro will hold $1.30 to the dollar, which is the year-low, while oil priced in Euros is already hitting 18-month highs, putting tremendous pressure on EU consumers as we head into the summer.

Still we expect at least a bounce off of Friday’s drop but then what?  It’s a very heavy data week with tons of earnings.  Frankly, I don’t know which way we’ll go - that’s why we’re in cash!

Good luck to you if you’re not…

This interview by Bill Moyers with William Black will blow your mind!

Wonder if Mr. Buffett seen this one?

This chaotic game may sadly be rigged, but with Allan we benefit as much as Goldman :-)

In the short term, money might goto PMs. But in the long term, if the market goes down, the PMs likely follow. When shit hits the fan, everything correlates. As you mention, we have man made disasters (http://www.socialnews.biz/tag/Man%2BMade%2BDisaster) and natural disasters all going on. The biggest of the man made is that the financial system is still not fixed.

well, true that most stocks will follow the tone of a big correction,but the 'conventional wisdom' regarding PM stocks is that they will fall less,and rebound faster and earlier than the greater market.

I believe that is true.