Below is a monthly chart of the DJIA with both a long term Trend Model (low volatility version) and a long term Elliott Wave count.  In addition, I've added the elements of an Advanced GET Mechanical Sell Signal which as of the end of May has generated a fresh SELL on this monthly chart.

(1) Trend Model:  The Monthly Trend Model has been on a SELL since June, 2008 @ 11,350.  The rally that began in early 2009 was insufficient to flip this model from its entrenched SELL MODE and now it appears that prices are once again in sync with the dominant trend, DOWN.

(2) Elliott Wave Count: In terms of Elliott Wave counts, this one shows a completed multi-decade five waves up, terminating in October, 2007.  I would expect at a minimum, a decade of lower prices.  Whether current prices are in an ABC, or have traced out  Waves 1 and 2 and are now in Wave 3 DOWN, it is academic.  Whether a Wave 3 or Wave C, both are third waves, so the expectation is hard down under either interpretation.

(3) Mechanical SELL SIGNAL:  Below is a close-up of the most recent five years which culminated on Friday with an Advanced GET Mechanical SELL SIGNAL.  The elements of this very reliable, objective signal are a Waves 1-4 shown on the chart; an Elliott Oscillator which goes from way oversold to neutral (bottom study); a False Bar Stochastic Sell Signal (top study); and a break down of the Trend Regression Channel (broken on Friday's monthly close). The upper target for this move is shown as about 4,500 on the DJIA, the lower target (not shown), just below 1,000. 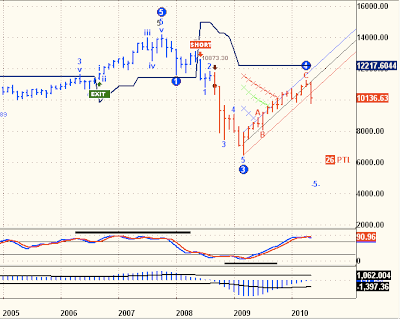 One more heads-up for the days and weeks ahead.  Below is the DJIA monthly chart using my standard Trend Model settings (as opposed to the low volatility settings above).  Note that the rally from 2009-2010 was enough to flip this model LONG last September.  But more importantly note where the model will flip back SHORT: any monthly close below 9,601.84: 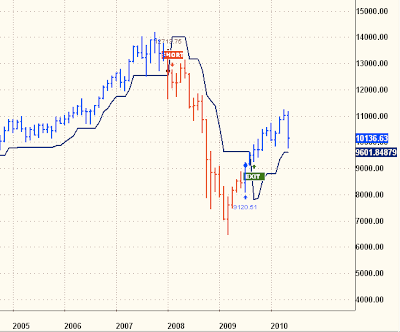 In a prior life (1977-1994) I practiced law and that experience, believe it or not, does at times help with dealing with market prediction  The legal system has its own specialized sets of rules, evidence and associated standards of proof.  One of major concepts in assessing subjective criteria, especially in terms of constitutional rights and probable cause, (or as it is know today, is he/she an illegal immigrant?), is a concept called, Totality of Circumstances, i.e. a standard for the evaluation of evidence suggesting that there is no single deciding factor, that one must consider all the facts, examine all of the factors,  and reach conclusions from weighing each factor within the context of the whole, "the gestalt of the totality of circumstances test. (Arizona v. O'Meara 198 Ariz. 294, 296, ¶ 10, 9 P.3d 325, 327. (2000)).

The analysis above sets out the case for probable cause that the market is heading lower, maybe much lower in the months and years ahead.  As we go along, I'll periodically review this analysis and if anything changes, will post it here.

This ain’t no place for the weary kind.

what are your current standard and low volatility settings? I know you have changed the numbers a coupe of time. Last I heard to were using 7,2 for standard as opposed to 7,1.7 you had before the change.

Do you know how Advanced Get makes False Bar Stoch? I am using Ninja Trader and wanted to program the FBS as a custom indicator.

Have you back tested the trend model? I am working on that right now. I like it for exits but trying to come up with a better entry technique.