I have a number of charts for viewing this weekend, but without a doubt, these next two are my most important, so let's get right to it: 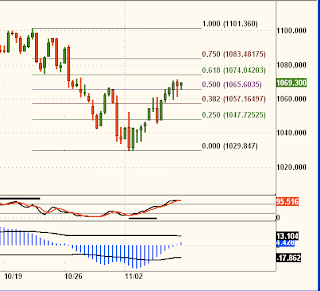 The market topped on October 21. It declined from 1101 to a low of 1029 on November 2. That 72 point SPX decline is in the process of being re-traced in a news-riveted suckers rally, retracing about 55% of the original decline so far. Here is the same chart, with Advanced GET's suggested wave count: 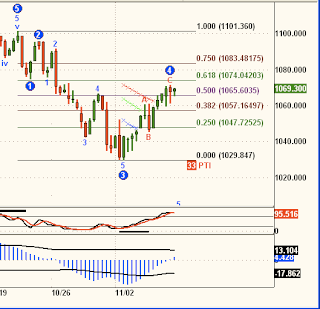 For context and perspective, a Weekly chart:

Below, a close up of the past 10 months on the Weekly: 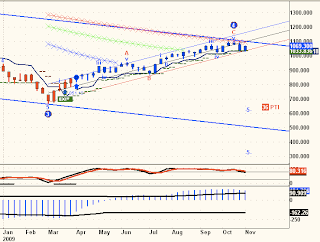 Now another view, look through the perspective of the Daily chart: 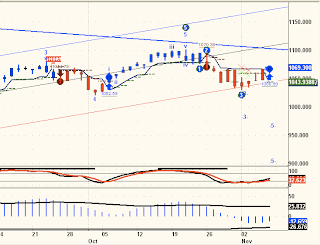 As you can see, Advanced GET has already detected the beginning of a five wave decline from the October 21st top. Yes, those are ATR & BWT Buy Signals as of the close Friday. It happens.

Earlier in the day on Friday, the 90 minute chart flipped LONG: 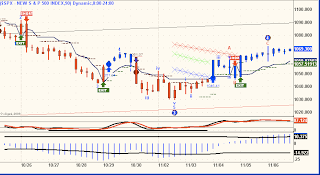 (Please recognize how you cannot rely on occasional charts from Allan to short-term trade, you have to be him to do that and there is only room for one of me, at least with the current level of civilization's technology).

That brings us to the last chart for this post, the 15 minute SPX: 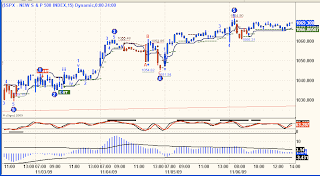 Once again, the most prominent feature of this pattern is the set-up of an Advanced GET Mechanical Sell Signal. As you may have noticed, some of these trades have worked beautifully, some have outright failed. I have been trading this set-up since 1995. At the time, Tom Joseph, who developed Advanced GET told be about 67% of these set-ups work, 33% fail. (Since I had gone to Akron to personally meet him and buy the software, he spent about two hours giving me a personal tutorial on his labor of love, Advanced GET.)

My point is that in the 15 years of trading this pattern, I can attest that about 1/3 of the set-ups fail, 2/3 work as designed. That doesn't mean you abandon the system upon one or two failures. It means you take every one, as though it will work, because both statistically and real time history says the probability is that it will work.

The Oscillator in the bottom window has retraced to the zero line, the stochastic is about into overbought territory and once ATR and/or BWT trigger SHORT, the trade is on. Joseph uses the trend regression channel break for his triggers, but since I have so much faith in ATR and BWT, I use those for my triggers. For Monday, those triggers are 1066.86 for BWT & 1066.00 for ATR. 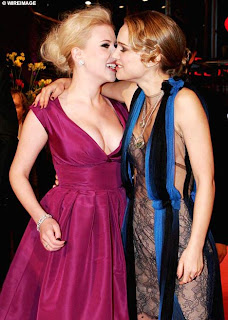 Um that still doesn't explain the girls kissing on the bottom. Nice information, though... thanks for continuing to upload this stuff, I check it constantly.

Got a massive Treasury auction this week coming also. And if we look at Dec09 30yr Tbond chart can see that if it fails to hold 118.00, then what we have had Sept - Oct is an interim top H&S with neckline 118. Thus a breakdown here would make for a very expensive auction. Also must consider many other future auctions ahead given Obama signing over the weekend extended unemployment benefits as well as mortgage discount for buyers--all of which has to be financed via Treasury auctions. (not to mention possible Obamacare Plan).

The point is: it is in the interest of the Treasury to somehow drive people into Treasuries, and the surest way to do this is crater the SMkt (perhaps this is why GS is so low on its chart; the workers there know and are selling gifted shares early). We saw a lick of this SMkt<\\Treasuries already--that which set off the two week decline in the SP500 recently.

Before any trend downward, the operators like to flush out the shorts because only the operators are supposed to profit from market downturns.

Ergo, notice Wed's (110409) shooting-star candle on the DJIA chart. That should have signaled a down move Thursday, but instead it was a bear-trap.

Those that paint these charts already knew what Thursday's economic report would be and how it would be spun CNBC. Thursday we got the ramp spike open on no volume.

But beyond the open the market extended itself as many shorts capitulated. Lack of action on Friday was due to no shorts covering and low volume.

What I’ve dared, I’ve willed; and what I’ve willed, I’ll ... do! They think me mad – Starbuck does; but I’m demoniac, I am madness maddened! That wild madness that’s only calm to comprehend itself! The prophecy was that I should be dismembered; and – Aye! I lost this leg. I now prophesy that I will dismember my dismemberer.
-- Melville, Moby-Dick

I guess the point (question) I'm making is that even with good signals and a sharp system, there is always the alternative count that needs to be considered.

these last weeks look as much like a zig zag wave 4 pattern as anything else.

The more I look at it, the more I think it's a sucker's losers game to be 'investing long' in this kind of market.
The only rational approach is to see it as a 'trading short term game,day trading and short term swing trading,and that is all.bet a few bucks, make a few bucks and get out.

ALLAN, One question for you.

Would you be trading,or even try to be trading ,in this market,IF you did not have this automated system that you use??

actually two questions, in the same vein,.... if you did not have this automated system, but you had some other basic approach that put together wave counting,fibonacci,trendlines,s/r points,pivot points,various indicators (RSI,CCI,MACD,MA's,SMA's,etc)as well as study of fundamentals and political info.

would you use all that to trade these markets?

definitely bullish for gold--not only the massive spending but this could sink the Tbonds as well as cause civil unrest due to taxes for abortion.

might be very bearish for Russell 2000 index as this will clobber small & med businesses. Also could have impact on SP500 due to destruction of insurance companies.

WASHINGTON – In a victory for President Barack Obama, the Democratic-controlled House narrowly passed landmark health care legislation Saturday night to expand coverage to tens of millions who lack it and place tough new restrictions on the insurance industry. Republican opposition was nearly unanimous.

The 220-215 vote cleared the way for the Senate to begin debate on the issue that has come to overshadow all others in Congress.

Please tell us - should we be long or short the Market? Those are some complex charts. Long or short please.

Again I am impressed you went to Akron- what a toilet. Filthy middle America at its worst. Screen door rusting off its hinges, deep pile orange carpet from the 1970's, stale pot roast in the oven, mangy dog staggering about just looking for a place to die. Whew!

On your advice I use GET and it is the most useful trading platform I've seen.

Do you find their proprietary "Choppiness" indicator use ful and if so how do you use it.


If you are ever in Bar Harbor, ME please stop by our compound here and visit. We are just outside the city proper and if you need one we have a helopad for your use. We also have yacht access.

But those are a lot of charts and you only need to post one word "Long" or "Short."

Hamilton, A lot of good people came out of Ohio, and still live there!
Use your mind instead of asking Allan for a free pass.
Give me your GPS co-ordinates and I'll stop by on my yacht or chopper some day and buy you a beer!
DOUG from Hamilton, Ohio

[The market bottomed in March from 666.]

Allan, please stop your charts, LOL. how much money are you going to help folks loose on all your bad market calls! Stick to the stock picks and don't get folks buying your shorts!

What don't you get about set-ups that scream

"IF THE MARKET FALLS TO XX LEVEL, THEN GO SHORT"?

The market opens, does not fall to the trigger levels, therefore, DON'T GO SHORT.

Simpletons should not be reading this blog or risking your money in the markets, instead, go buy a silly hat and watch cramer.

What a joke..Allan talking about "sucker" rally...from the ultimate sucker who has called for a crash every time there's a downtick

"Allan, please stop your charts, LOL. how much money are you going to help folks loose on all your bad market calls! Stick to the stock picks and don't get folks buying your shorts!"

Anonymous
Don't you get, you need check 5 minute charts. The smart people here get it.