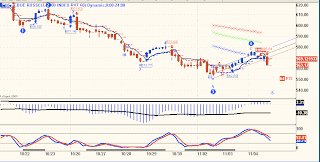 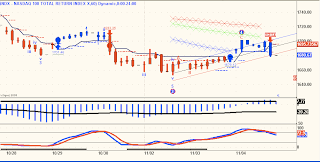 By the look of these charts, it may be a 'GOODBYE PORKPIE HAT' for this market soon

Lots of hype, followed my a market unable to hold onto its gains.

The last few weeks, the shorts would have lost big on a Fed announcement like today and then made some of it back in the following few sessions. The shorts should have gotten clobbered today, but they made most of it back in the afternoon session. Tomorrow and Friday are going to be ugly for the bulls.

The Fed's lost its credibility, so its losing its ability to manipulate over anything but the extreme short term.

Now, we have stocks tanking over even the smallest rally in the dollar, and gold has lost most of its correlation to everything, probably because of the safety trade.

The future looks pretty clear to me.

I had thought that the Fed wouldn't raise interest rates because they didn't have to do so. It is more politically expedient to rally the dollar. This achieves the same result as raising interest rates and leaves the Fed blameless if the economy stalls as an after effect. I didn't notice what else the Fed did.

I just read an article which pointed out that the Fed chose their path when they curtailed the program to buy up bad assets from the banks. They are winding up the program in March instead of the end of the 2010. Ask yourself, why would they do that? The answer is either things are so good the program is no longer needed, or things are so bad that it is a wasted effort and they don't want to be around when the derivatives hit the fan. Now, we all know what is about to happen in the commercial real estate and the residential adjustable rate arena. Today, the Fed conveniently stepped away from the issue before the tidal wave strikes, and I didn't even notice. This will, of course, absolve them of any blame (in the eyes of the ignorant) for what is about to unfold this year. It is also either an admission that they have failed, or a unequivocal expression of their confidence in the economy. If it is the latter, then why did they state that interest rates are not going to be raised for a long, long time?

The game is over and the villains are scurrying to assign blame to someone else.

Why is it that I get the feeling everyone on this site is upset when the market isn't crashing?

Could you imagine if nobody was allowed to short the market? Less volatility, no short squeezes ...just ...INVESTING.

You know, what the stock market was intended to do.

interesting thoughts.just remember this yankee hater. the last time philly won back to back world series was...?? the great depression...so maybe the yankees gave us a bit of a stick save.lol.
................
I like hearing peoples analysis of the market. but give yourself a name other than anonymous....so people can address your points.
............................
my current thoughts are that when you are a savvy chart reader,elliott wave counter, and just simply following allans charts triggering, its easy to anticipate the 'trigger timing' ...and then it becomes a big disappointment when somehow the big move doesnt materialize, like with prechter's pronouncement on august 3.

Allan, anyone have an opinion of BAM investor http://www.baminvestor.com/blog/ noticed on Helge's comment page http://www.cyclelt.com/predictions.html

Helge relays that BAM suggests a dramatic decline ahead.

Any comments on BAM?

Not that you in particular are one, but any idiot can make money in a bull market. It's annoying to hear the ignorant express their views in a superior and condescending way. The majority of the bulls succumb to their ignorance and herding behavior to ridicule the bears, even though they don't usually know what they are talking about. After every crash, they run around expressing the belief that nobody saw it coming. So yes, I don't particularly like perma-bulls and would love to see them skinned, again.

As for shorts, they provide necessary liquidity in times of stress. You have to have someone on the other side of a trade to trade. In every market that it has ever been tried, eliminating the short side removes the buffer of short squeezes having to buy during a market drop, which would otherwise counter the fall. Even though it is counterintuitive, if you are pro trade, you must be pro shorts.

I've looked at their stuff, still not enough to form an opinion yea or nea. Give them credit for taking a stand with clarity, instead of the usual vague clliche-ridden verbiage from most subscription services.

I need a reason to believe why this blog which keeps losing my money will ever turn around!

Can we readers replace Allan?

Maybe a "virtual coup" of some sort is necessary and then install a "real" guru , not someone who trades in between hockey games. And stays short for 8 months during one of the greatest bull markets in history.

Allan we are getting cut by a thousand needles here. I donated to you a while back is there anyway i could get that back? I am hurtin over here

Douglas,
A suggestion to you is to get your own ATR system and follow it.
My ATR system went long 3-17-09 on the daily and got me out on
10-30-09. I am currently flat.
Use Allan's blog as it is meant to be used, the sharing of his thoughts, ideas and charts.

Allan, thanks for sharing!!

Good comments. You must be using different settings for your ATR. I am using 1.5 and 7. Care to share yours?

Sure, send me a private note with the date and amount of your donation and if verified by my records, I'll send you it back.

Also, understand that I trade much shorter time frames then those I post charts for and that is the nature of this game. My charts are examples of pattern set-ups, you can discover your own set-ups by paying attention, taking notes and backtesting. You can subscribe to Market Club and use their tools, you can buy $10K worth of software and charting tools as I have and learn for 25 years, as I have, and then you might be able to replicate my system or results.

I mentioned a few weeks ago an automated trading platform my programmer is working on that incorporates some of my models, but that is private and not for sale. I do allow access to it to my managed fund clients, but that is a very select and limited group.

What I am saying is find something that works, then trade it.

Eric,
I do not have my settings as sensitive as yours. 50 and 2.5
The symbol I follow is the oex. It is a good representation of the market with 100 stocks.

Thanks. That is quite a difference. I will review your settings on the OEX. Thank you for sharing!