By now you all should know that I take some pride in generating blogs that are apart from the norm, engaging, unique patterns, images, concepts and approaches to the markets that are not like anything else in the Blogosphere. Today I depart from the norm and re-publish a discussion from Elliott Wave International that considers the concepts of mass psychology and determinism and how it relates to market behavior. (I am republishing without permission, it's too important not to share.)

How different are the Elliott Wave Principle and the philosophy of determinism? Given that the Principle teaches that the financial markets and the culture at large are patterned, does it "allow" free will?

Discussions concerning determinism are often challenging due to the concept involved: what “determinism” means. Since the 17th century, it has commonly been accepted as the doctrine/theory that all human thought, action or event is caused entirely by preceding events. This is to say that all physical events and human actions are determined by antecedent factors. Bob Prechter addresses this issue in Prechter's Perspective (Chapters 1 and 3; excerpt):

"It’s almost incomprehensible to consider that there could be a mathematical expression that explains mass human behavior. That is the most fascinating aspect of the Wave Principle. People are a long way from accepting it as a possibility in the social sciences. Still, this is not determinism. As individuals, we can unquestionably exert free will. But the style of behavior of the crowd is entirely different from that of an individual. It is based upon unconscious mental processes, not reason... Collective psychology is impulsive, self- generating, self-sustaining and self-reversing. Almost everyone believes that social actions cause changes in social psychology. If that is true, then events must be so perfectly determined that they create the Elliott wave patterns we see in the markets. For people to claim that the latest idea from the White House...or the latest statistic on the trade deficit or earnings or war or natural disaster has any effect on the market’s pattern, that such things are determinants of stock prices in any way, is suggesting a far more radical view of the harmony of the universe than I am. In other words, to argue that events cause the state of social psychology is to argue that events are patterned, which is determinism. In that case, free will is invalid, in which case no one could make money from the Wave Principle, which we have shown can be done. On the other hand, if social psychology guides the tenor of social actions, then it is only mass psychology, which is apparently a process governed by the unconscious mind, that need be patterned to produce structure in markets." 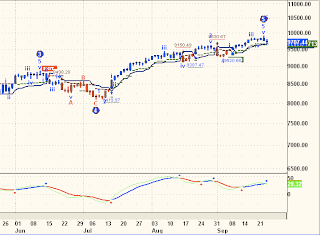 Such great gobbleygook Precther - man of many words, so little common sense.

amen to that anonymous.

I wonder if the typo in the title was intended or not.
"psyhology?" the study of mass a-holes?

Kinda works when it comes to the stock markets, don't it?

It was just a typo, that's all. I was in a hurry to get to a dinner meeting and posted without proofing. It happens.

When you guys produce the body of work that Prechter has, maybe your criticism of his ideas will carry more weight. Taking pot shots at successful individuals is easy; challenging their ideas with fresh, imaginative and coherent content of your own, now that's something I'd love to read.....would even give you your own guest blogs.

As for gratuitous name calling, are you smarter then a fifth grader?