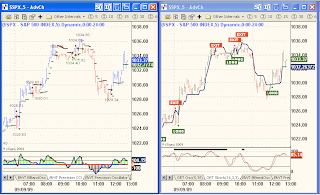 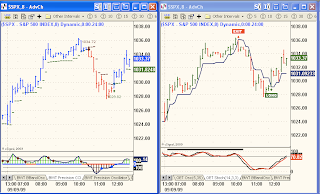 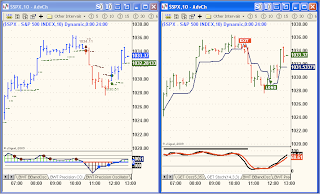 The wave from the daily high to the low looks impulsive and has a textbook 5-wave EW pattern. The rally off the low is also a textbook EW a-b-c (easily seen on the ESU9 with 3-min. chart). So a i & ii completed (so far). IF the markets open down tomorrow and fall hard, that should be an obvious EW comfirmation that the top is in.

allan - what moving average are you using on the 5 min - looks like buy and sell triggers if price drops below that average. thanks

samiam: I know it looks like a moving average but it is the ATR_TrailingStop line, equivalent to the dashed lines in the Blue Wave charts.

How do you avoid getting whiplash with those BWT signals - your setting must be low for sensitivity. How do you filter them out?

Christopher: You can visually see where the price bars crossed the stop/reversal lines and then closed back beyond them to nullify the signal. It happens, but not often enough to pose a big problem. Requiring one time frame higher to confirm is one way of filtering those, or just live with them as they are ultimately made up for by a decent sized trend.

I happen to respect Meredith Whitney's opinions regarding the economy. I think she's very sharp. Anyways, this AM on CNBC she stated she expects home prices nationally to decline another 25% from here. See link below for video where she explains her reasoning.

Also on the same page see her video on rebuilding the credit markets. She expects another material leg down for financial stocks too, probably starting in October with the beginning of Q4.

Allan, I thought this was interesting in that it ties in well with the Wave 5 down scenario you've laid out here.....Brian B.