Market Club: Even a caveman can do it

About a year ago I introduced the trading system known as Market Club Trade Triangles as a way to always be on the right side of the market, i.e. the dominant trend. It remains an easy and inexpensive way to track investments and market direction.

Here is a snapshot of the current S&P Market Club chart:

Zooming in on the Weekly signal on a Weekly chart, we see that the lowest price on the most recent three bars is on the third bar from the right, at 978.51. 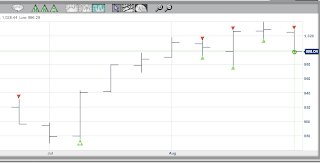 The SPX closed Tuesday at 998.04. Should current prices take out the lowest price of the past three bars, anything below 978.50, a new WEEKLY SELL SIGNAL will be generated.

Are you ready to move on to Chapter II?

Well, there is no Chapter II, nor Lesson II, nor anything else that needs to be taught. This is the brilliant simplicity of Market Club's Trade Triangles, even a caveman can do it.

Ah, but what about the nuances, Allan?

Yes, there are those pesky nuances. For example, you only want to trade when both DAILY and WEEKLY Triangles are in agreement. You can throw in MONTHLY TRIANGLES if you really want to play it safe, at the cost of some nice profitable trades that might carry some additional risk.

I have over a year's worth of Blogs on Market Club's Trade Triangles, all of which will come up if you plug that into the Search box above. This is an elegant, inexpensive and easy system to learn, master and trade.

I've taken these posts into some more esoteric methodologies in the past year. Esoteric meaning more complicated, difficult and expensive. But they make for nice, intricate, colorful charts and ego satisfying discussion and analysis. These other methods also lend themselves more readily to my style of quick-strike-and-out trading.

Outside of my fast lane, Market Club endeavors and succeeds in getting direction right, the single most difficult, yet easiest, task at hand.

(Chew on that one awhile.)

Does your 'quick-strike-and-out trading' only apply to the S&P Index?

Or would it also apply to say your 'Flu Basket' as well.

Wondering how long you typically stay in these other gift stocks you give to us followers.

I'm guessing you actively trade them the same way by following the 5 EW waves (shorter term) ups and downs. Or would you ever stay the coarse and ride them with the shorter term ups and downs to the same point where the single day and weekly triangles turn red.

I purposely don't give detailed accounts of how I trade these picks, because it doesn't matter how I trade them. Suffice to say that these are generally good ideas for both shorter-term pops and longer-term swing trades. The rest is up to you.

Fair enough- words 'longer-term swing trades' is all I needed.

Can the Gekko from Geico do it?

>>You can throw in MONTHLY TRIANGLES if you really want to play it safe, at the cost of some nice profitable trades that might carry some additional risk. <<

I down see monthly systems being less risky. A problem with longer-term signals like monthly is that if you enter with a stop and reverse on a counter monthly signal, your losses and drawdowns can be pretty high.

So that brings me to the challenge of all the methods you have been talking about. The main challenge is not in what system is best, but in determining the best compromise between maximizing profits, and minimizing losses, drawdowns, and risk. Time frames and parameter tweeking are what we have to work with. Finding the optimized settings for each market is vital.

Allan - given the resiliance the market has shown today by not dropping further especially by the DOW, S&P and NASDAQ do you realistically think that the S&P will drop below 978.50?

Was yesterday's drop the correction and from here on out the market is going to remain flat for the most part?

Scott, I think yesterday (Tuesday) was the kick off to something much more dramatic. lack of follow-through today is only relevant of market spikes up and recovers its losses. It hasn't, all it can muster so far is a sideways choppy day. I expect 978 to fall this week or next.

Thanks Allan! As always appreciate your perspective - sensible, realistic and supported with technical analysis.

All the best!
Scott