That is the headline of today's issue of The Elliott Wave Theorist. I have suggested this $20/month publication on this blog before and the content of today's issue is why: It contains a year's worth of subscription cost ($240) in it's ten prescient pages. I know many of you have already subscribed, and for those who haven't, you can have this issue in your hands in about 15 minutes by hitting one of the links on my site. What follows are my charts which pretty much confirm Prechter's forecast in the issue. He actually has reasons, I just have charts. 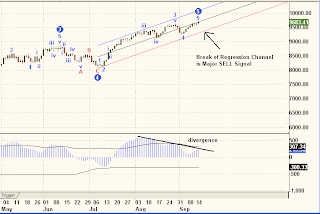 The above chart is the Daily DJIA. I've annotated the divergence in the Elliott Oscillator on the bottom of the chart and the new high this week in the index. The auto-regression channels that have contained the 5th wave to date along with the divergence on the oscillator set up what Advanced GET refers to as a Type II Mechanical Sell Signal. As long as the divergence holds, when prices break through the lower channel a SELL is triggered. That level is at about 9500 on the DJIA. Make a mental note of it, when the index drops below 9500, I suspect all hell will break loose in global financial markets. It's not that far away. 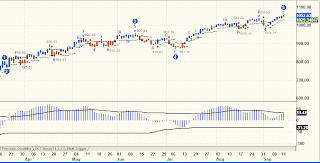 Above is the Daily SPX. Same divergence, but instead of the auto-trend channels, the Blue Wave stop/reverse SHORT level. On this Daily chart its currently at 1029.34. Same connotation applies to that level as to the above referenced 9500 level on the DJIA. Pay attention. 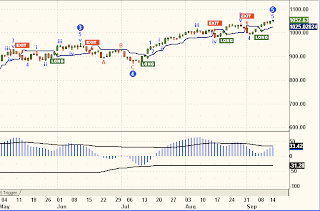 Above is the Daily SPX with the ATR stop/reverse level, 1025. Again, remember this level, it may not last for much longer.

Finally, the Weekly SPX chart that this site has been tracking since early March: 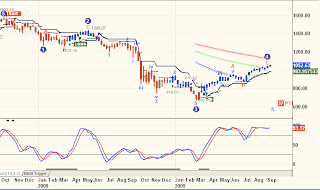 A triple divergence on the False Bar Stochastic, when it breaks, it will break hard and long. On the Weekly Blue Wave and ATR the key level is 984. Ditto.

If you want a head start, here is the 60 minute SPX chart with respective stop/reversal levels for Blue Wave and ATR: 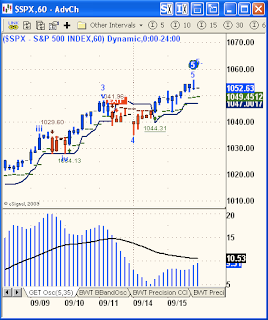 Note also the deep, deep divergence in the bottom Elliott Oscillator. These two reversal SHORT levels are only about 3-5 points below current prices. Thus, here would be an aggressive first salvo for playing the next leg of the decline.

Impulsive declines don't ring bells at their inception, they just break key levels of support. These are our tools, let's use them.

PS: Glenn Neely's time and price targets are coming into play right here and right now. Another relatively inexpensive way to get a heads up from an excellent analyst for those few times a year when pulling the trigger is objectively defined by his own brand of rigorous market analysis.
Posted by A at 2:51 PM

Another great article with interesting analysis can be found in the Market Club Blog titled "Is The Third Quarter High In Place?" In the article it states that the high could be set today based on the release of the retail sales report. The link to the article is http://club.ino.com/trading/2009/09/is-the-third-quarter-high-in-place/#more-1637

The next 4 weeks should present some great trading opportunities!

I would agree with you. I think Prechter is right, but not until Dow hits 10,000. He has been calling this even when the Dow dropped to 9200 a few weeks back, missed the rally to 9700, suckered me in, I missed the rally and lost my gains on the dow dropping from 9600 to 9200 and then some!

That's why support levels are there, as long as they are standing (not breached) there is no sell signal and trend (in this case uptrend) is in tact.

Thanks Allan! For the S&P:
What's the next support level on the upside if breached the uptrend continues?

Likewise, whats the support level if breached will trigger a down trend?

If possible, I'm curious to see your BWT MONTHLY $SPX with ATR from early 2003 to present.

If it shows me what I suspect it will show me, I'm going to purchase that software and devote more time to golf :-)

Here we go again with the Elliot wave B.S. targets. Allan, what happened to Glenn Neely's huge drop that was supposed to happen in the S+P 500. He predicted a 50% drop from June of this year when the S+P was 911. Now the S+P is over 1000, wow huge drop. You guys keep calling a drop, where is it? I hear Prechter on the radio over 6 weeks ago saying a drop is imminent. Oh really? Ok, 6 weeks later, I'm still waiting. Elliot wave is just as good as reading tea leaves.