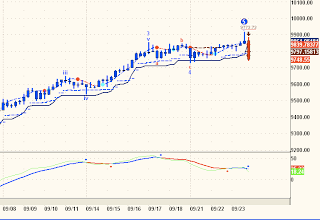 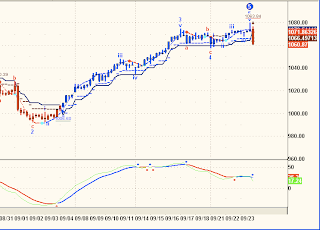 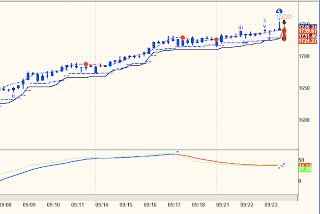 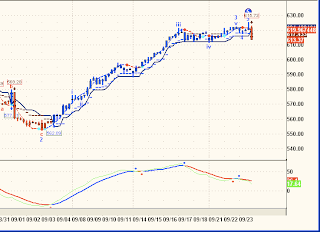 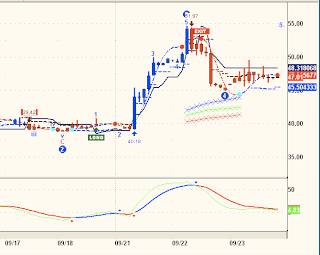 Allan, that was quite a reversal this afternoon for the S&P and USD. One of the blogs I follow believe P2 topped at S&P 1080? My news letter also said at 11:00 a.m. today, that the dollar will rally hard no matter what the fed policy, and will reach triple digits by years end. So far so good for the USD! Finally, they said the DOW to correct 30 to 70 percent??? A little extreme in my opinion, do you have any thoughts on the latter? Rob from Michigan, Chesterfield...

The big picture Socionomic thesis is that we are living through the worst financial crisis in the past 200 years, so 30-70% may be a bit optimistic.

allan any thoughts on the last news release for nnvc? is the company far away from going into human trials?

I suggest we not panic yet.
Every chart I look at,be it individual stocks,to indexes,to the currency I follow (eur/usd) shows me a wave 4 has begun....the last top (sept 17 area) was apparently... the finish of wave 3 of 5 up. so this looks to me like the onset of wave 4 of 5, which would mean... dont panic, it will likely slide as much sideways as down,maybe to a 50 % fib retrace of the wave 3,which might take us to the sept 2 bottom or worst case,august 17 bottom....and then up and zig zags along,up and down until it expires and wave 5 begins to go Up to the real END.
Timing is always the big issue, as those who thought the bear market rally top was late april,or early may, or early june, or early august....only to realize that it wasnt.
It's this 'new normal' market system.(rigged game)
So, while I could be wrong about my wave count....I believe what I see is the wave 3 finished (sept 16time frame)...and now we are in the beginning of the wave 4 down.My sense of timing is that wave 4 will last another week and a half until october 1...at which time the phoney 3rd Q reports will come out, phoney lies about the recovery will be announced, and the wave 5 breakout UP will commence. When? hard to tell, maybe october 1,or october 10,or 17.Otherwise, if this wave 4 stretches out longer... I would expect to see the end of wave 4 maybe later october and the wave 5 up starting then and going to december for the xmas retail season and the new year.
I have great respect for Prechter and his track record, and for Allan's technical systems, and all experts who are far more experienced than I am, but I also have a'feel'for the market and the world around me, and I understand that one thing very important happening in the minds and emotions of all investors is this fear of disaster lurking on the horizon...because what happened last year was a tremendous trauma...once in a lifetime...and the public psyche is suffering the stress and trauma of that shock. its like post traumatic stress syndrome.I have experienced that personally, from a near fatal car accident years ago.my head smashed against the windshield,and by a true miracle,I walked away almost without a scratch. except I suffered post concussion syndrome. Today,13 years later,when I walk into the garden,and my head gently brushes against a leaf on a little branch,I experience this bizarre reaction -- my head jerks back suddenly.If you tap my forehead with your finger, my head will suddenly jerk back violently...its really bizarre....thats what trauma can do to the psyche. post traumatic syndrome. As investors we all have that ultra sensitive hair trigger reaction in our investing psyche now....and I would think its wise to see it this way....and question it a little bit.
Maybe we Are in a big bear market. No rational person can refute the disasterous macroeconomic fundamentals, that are still there.Everything including the great Mayan Calendar says the world is ending soon. Smart money Should be on the bear side. Even if it was early to forecast May as the end ...and here it is september and we're still waiting for the sky to fall.
Even Precther is wrong in his timing,calling august 3 as the Top.This is why I call it the 'rigged game'.
It will end when THEY want it to end.It will keep rallying as long as THEY want it to.THEY will bomb Iran if THEY intend to,when they want to,and then the world will end.or THEY will cooperate with the Rest of the World, and we will all survive...and we will see alot of zig zag A-B-C 's for the next year or so.
In which case,if we can figure out how to play this 'rigged game',will find the way to do it is by TRADING IT,not investing in it(buy and hold).So books like Michael Covel's Trend Following become important.and Taking profits in a timely way becomes important.
There will always be some good stock to trade for a month or two. and make a thousand and move on to the next one. I think this is the strategy I'm cultivating now.

I should add another comment about the idea of this current wave being a 'wave 4' instead of the beginning of wave Major 1 of 5 of 3 DOWN..... which is to say that as the wave unfolds in the coming days and weeks...I presume we would need to 'see' at each step of the way the Behavior of the wave action...in order to determine if it is acting like a 'wave4' or a 'wave 1 of 5 of 3'
...at what points you determine which is which...is the subject of the ongoing debate. I imagine there are some standard 'elliot wave theory rules' that identify the difference .I'm not expert enough to cite them here.
What I know is that wave 4 often moves as much 'sideways' over time....as it does 'down'. and has a characteristic scrambled quality,signifying uncertain direction.Wave '1'... ought to look more straight forward ...in 5 discernible sub waves ,followed by a wave 2 to the general 50% fib area correction.
But 'wave 4' action ought to be more undefined...with larger retraces from tops to bottoms to tops ,etc...breaking sub wave trendlines,being more zig zaggy,until it makes a triangle terminal to transition into wave 5...thats my take on it.