Living in Arizona and being a sports fan, it was easy to become a follower of the Arizona Diamondbacks. In fact, the Diamondback-Phillies game is on TV in the background right now as I type. Last summer, my first baseball season here, the Diamondbacks won their Division in impressive style. They came out the gate in 2008 with the best record in the major leagues for the first six weeks of the season. But beginning in mid-May, they stumbled, then fell, then spiraled down to become one of the worse teams in the majors. What happened?

This is question that some of my readership have been asking me lately. Not what happened to the Diamondbacks, but what happened to their stock trading? Without naming names, I can point to a half-dozen trades in the past two months where I made great profits, but where some of you took losses. What happened? 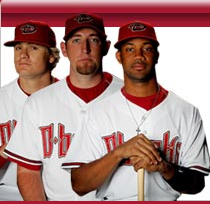 Much of the Diamondback's decline from twelve games over .500 to a game under .500 can be attributed to an absolute disappearance of offense. The team went from getting 10 to 12 hits a game to getting less then five hits a game. What happened?

Almost every one of my trades this year has been up at least 5% from where the stock price was when I published that particular blog to the stock's subsequent highest point. For anyone to have taken a loss, it means that they let a decent gain turn into a loss. Part of that can be laid at my feet, for not holding your hands and telling you what to do every step of the way. I am also fond of pointing out my triple digit wins, almost by implication suggesting that all of my picks are destined to double, at a minimum. The truth is, it is rare that I post a trade here that I don't expect to double, at a minimum, my home run mentality.

When I played ball as a kid, I was always successful, always one of the first players to get picked. But I had no special skills, save one. Back then, I was small for my age and I had to figure out how to confront the size-bigotry that permeates young males regarding ability in sports. I learned that if I choked up on the bat I could direct just about any ball thrown my way right back up over the pitchers head, over second base and into center field, where no fielder lay in wait and where I always was able to get on base. No home runs, just consistent singles, a consistency that landed me accolades and starting positions in our games and leagues in 1960's Detroit. The kids that hit home runs got to play as well, but the ones that swung for the fences and failed, they got to sit on the bench and play only in the late innings when the game was already won or lost. 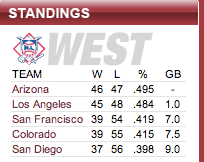 That is exactly what happened to the Diamondback hitters in late May and June. Instead of going up to the plate to get on base, anyway they could, they all went up there to hit home runs.
Lately, they have been hitting the ball right back up the middle, choking up, punching the ball to the opposite field, getting on base any way they can. The D-Backs have regained their offense, slugging a dozen hits a game, scoring runs and are back to being competitive in the National League West.

I may expect that each of my published picks will be a home run, but that is not how I play them. I have the unrealized profit or loss for each position in my account on my screen all day long. I toggle between actual gains and percentage gains always aware of where my trades are going, making sure they are going in the right direction. I'll give up some ground, but not much. 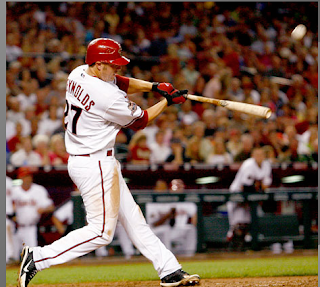 Of course not. So why would you let a nice 5% win come back on you, back all the way to break-even and then watch as it turns into a loss? I close out a lot of my trades on the same day I put them on. Others survive overnight, but always, always, those that survive overnight are in the profit side of the ledger. The larger the profit, the more room they have to slide back, but always, always, a finite amount. And every new trading day, those that are wins must stay wins, or they are pulled off the mound for a new trade, a new young stud out of the bullpen.

I know what your thinking, "Allan, are we hitting, or pitching?" Ok, so my baseball metaphor is getting out of hand. Still, the comparison is valid. You have to do whatever it takes to win this game. Having stops and using common sense it part of the package. I'll keep throwing up ideas, fast balls down the middle, while your job is to take a look at each pitch and decide if it's something you can hit. I can't swing the bat for you. I can't run the bases or manage the trade for you. I can't do it all (well, maybe I can, but I don't want to).

It's the fifth inning, Arizona is ahead 10-2 and there is a lot of baseball still to be played. Get ready, you're up. 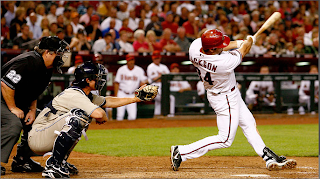 I've noticed a lot of sports-related posts on this blog.

As we Greeks, via The Olympics, "invented" sports, why are there no Greek related posts here? Why nothing abut the fact that we invented all of this, esp. one month away from the next Olympiad?

Allan, I fear The Gods are NOT smiling on you now. If this is true, it could effect this month's performance of your picks.

You can have all the charts, fundamental info, etc. you want but w/o the support of those on Olympus, you will not succeed in trading.

Always try to stay in their favour.

The Gods always smile kindly on one of thier own.

I enjoyed your analogy and it made its point. It is good that you don't do everything for us or some of us would become dependent on you and not learn how to make good trades.

Ever consider writing a book or ebook on trading?

He has written a book and runs a hedge fund as well using his systems.

I believe his book can be bought on Amazon and contact him directly by email if you wish to be a potential investor in his hedge fund.

Phil
Can you give the details about his book.

The book was written in the late 1990's and although of some marginal value, this Blog, archives and all, are a much better and more current example of my trading philosophies.

great article!!! I skipped over it for the last few days...thinking it was about the D-Backs...I don't care about the D-backs. Then I read it and realized itwas an analogy, about trading, and I do care about trading!!! and once again, I learned a little something...Thanks! Cruiseguy.

Crusieguy, just another firefly, trading in the dark.