In the Comments from last week, someone asked for a China pick. Readers, be careful what you ask for. VisionChina Media popped 22% on Friday due chiefly to great earnings and guidance. The issue is whether that gain is the end of this move, or just the beginning? The weekly chart below says it could be either and this week's action will provide the answer. Below the charts there is an assembly of fundamental facts and opinions that strongly favor continued upside. 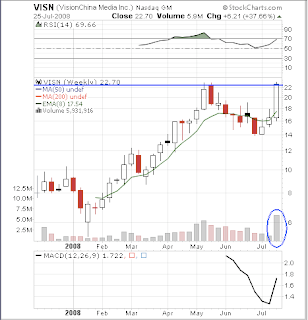 Below is a daily chart tracing out a Head & Shoulders bottom. 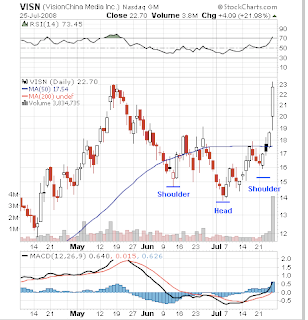 Those are some blow out numbers for VISN. But there is more to the company then last quarter's numbers:

“Other names I think being overlooked are companies such as VisionChina Media (NasdaqGM:VISN - News), which is a Beijing-based operator of an advertising network that has 39,000 digital TV displays, which are placed on buses and subway platforms in 16 cities in China.

"There is typically one single license for wireless broadcast that is afforded to every city in China, so in order to secure a long-term contract, [VisionChina is] the only game in town that is permitted to do this.

“With that license it is securing long-term contracts, and some of those contracts are for 10 years, but some are as long as 50 years where essentially the cost to Vision is fixed, but the advertising rates are likely to be variable.

"My guess is that over the next 20 years the advertising rates within China are likely to increase, consistent with the growth in the middle class within the VisionChina market place.

“VisionChina has come down in valuation, but it’s had a terrific year overall so far. The stock is up about 85% so far this year, but it’s down from a high of roughly $23. The stock is down for no particular reason that we can find. I just met with management not long ago. I think it’s probably one of my favorite names right now anywhere in the world.” 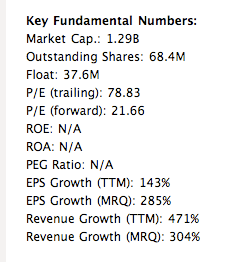 Vision China Media website
Posted by A at 1:52 PM

Ron, this one stopped me out at a 5% earlier today, so we toss it in with the 50% that don't work and get ready for the next one.