Following up on the MWY idea, first let's look at the longer term chart below (click it for bigger image). MWY was in a long downtrend, falling from above 15 to below 2 in a little over three years. The Triangles picked up some good long-term trades, Selling at 15, Buying at 11, Selling again at around 8 and finally Buying at 2.76 on April 1st. So while the stock fell 80% in that time frame, trading just the Triangles made 40%. Based on purely mechanical criteria, MWY is on a Buy. 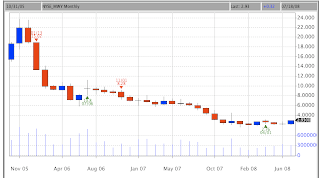 The Weekly chart shows just a slightly different perspective, suggesting that a good hard close above 3.00 will signal a breakout that targets 6-7: 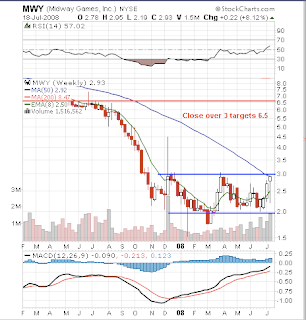 For our Confirmatory Fundamentals, Midway is indeed coming out with a Batman themed video game:

CHICAGO - April 18 , 2008 – Midway Games Inc. (NYSE: MWY), a leading interactive entertainment software publisher and developer, today announced Mortal Kombat® vs. DC Universe, licensed by Warner Bros. Interactive Entertainment. When a cataclysmic force merges conquerors from two universes, conflict is inevitable. Kombat forces friends to fight, worlds to collide, and unlikely alliances to be forged. In order to save all they know, the heroes and villains of Mortal Kombat must wage war against the combined might of the DC Universe (DCU). How can either side prevail when rage blinds them to the dark threat poised to destroy them all?

For the first time ever Scorpion, Sub Zero and the warriors from Midway's billion-dollar fighting franchise face off against Batman, Superman and other iconic and powerful DC Super Heroes, featuring signature attacks for both sides and a unique and intertwining storyline, written as a collaboration between the Mortal Kombat creative team and top comic scribes Jimmy Palmiotti (Painkiller Jane, Marvel Nights, Jonah Hex, 21 Down) and Justin Gray (Batman: Legends of the Dark Knight, JLA Classified, Punisher Red X-Mas, The Resistance) MK vs. DCU is slated to ship for the PLAYSTATION®3 computer entertainment system and Xbox 360® video game and entertainment system from Microsoft in Fall 2008.

Also noteworthy, look at how Midway stacks up against Electronic Arts in terms of market cap versus annual revenues. 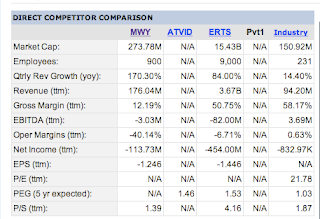 Finally, look who else owns Midway:

Sumner Redstone's daughter, Sheri Redstone, is the Chairman of the Board of Midway Games. Whoever is calling the shots, shareholders should be in good hands, i.e. going forward, nothing bad will be allowed to happen.

All of this adds up to a pretty good bet here. MWY is a good trade at current levels, but a really good, almost great trade at any close above 3.00, especially on good volume. Of course there is no guarantee this will work and I allow for 50% of all my trades not to work. It's the 50% that do work that make this all worthwhile. MWY has all the characteristics I am looking for to end up in that winning 50% group.

How about amarket update??

gary, i'll let you know if the market has bottomed as soon as you let me know, "has oil topped?"

Soros finally shorted oil at $137 a barrel and put on a long position in gold; he expects to see gold hold its ground even if oil continues to decline. In fact, the gold bug clique believes in a consistent 10-to-1 ratio for gold and oil. It holds that either gold will rise to 10 times a barrel of oil ($1,350 an ounce) or oil will fall to $96 a barrel–one-tenth the present market price of gold. Croesus was told Tuesday that statistics spanning many decades support, on average, this 10-to-1 ratio.

Anyone want to guess how many times I've been asked that in the past 30 minutes? My answer has been wrong every time, but here it is: "I expect MWY to go much higher, but with it already popping 5-10-15-20%, maybe wait for a pullback."

Merci! I found your follow-up article on MWY and very insightful thought I would watch it this morning. I saw it at $3 got disctracted by Bank of America, next thing I know MWY has blown past any % gains that BAC has. I'm learning and trying to figure out a strategy, but if someone already has one in place that "works" that I can leverage, why reinvent the wheel.

I aspire to your level.