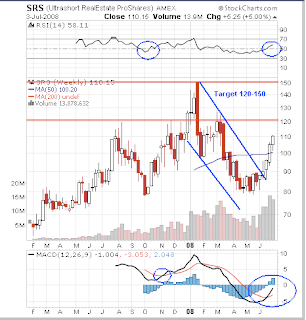 Before delving into the fundamentals here, take a look at the above chart. Technically, it is about right where it was last November when it started a 67% run from around 90 to around 150. This is not a guarantee that it will run 67% from current levels, but it is a decent roadmap for trading purposes. 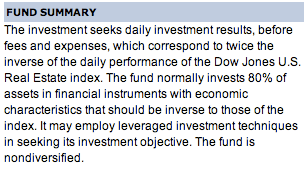 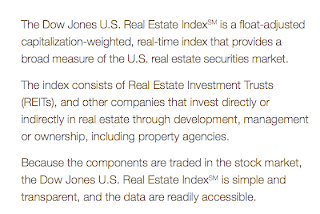 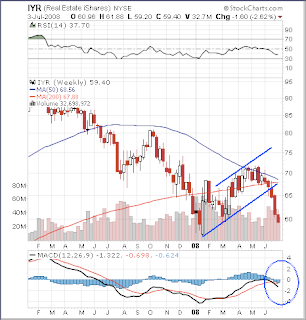 Finally, let's look at the charts of the three largest components of the Dow Jones US Real Estate Index: 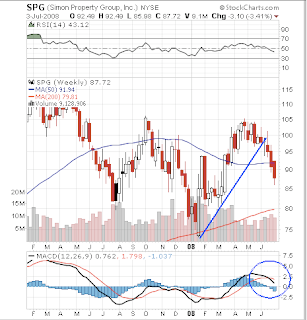 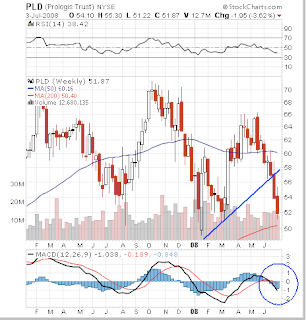 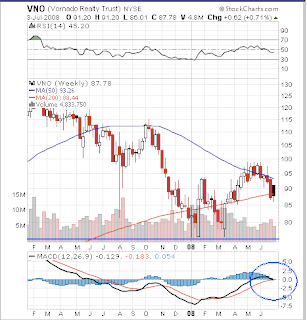 With technicals on the side of this trade, let's turn to the fundamentals. As described above, SRS is another Ultrashort ETF that inversely tracks the price movement of the Dow Jones US Real Estate Index.


Here is an excerpt from a recent article at Seeking Alpha which points out huge institutional ownership of SRS:

BANKS ARE BEARISH OR HEDGING, FINANCIALS AND REAL ESTATE

I recently visited the OwnershipAnalyzer.com site and did a little poking around to see who might be the largest investors in various ETFs. It is interesting to note that the largest institutional holder in the ProShares Ultra-Short Financials (SKF) is the European bank UBS (UBS), which at the end of the first quarter of 2008 owned over 318,000 shares. UBS is not alone.

Other financial institutions on the list of owners, albeit with much smaller stakes, include Oppenheimer (OPY) (not surprising since Oppenheimer is the home of the bank-bashing analyst Meredith Whitney), Jefferies (JEF) and AIG (AIG) among others. Were these banks just hedging or taking a bearish stance on their own industry?

The Trade: The trade here, going long SRS, is a bet on the worsening of the Credit and Real Estate markets as reflected in the Dow Jone U.S. Real Estate Index. I don't forecast, so there is no way I have any special insight into the worsening of those markets. But the charts above don't lie. Prices have broken down on the index as well as on the chief components of the index and have broken out on the inverse of the index, SRS.

The market is coming back from the July 4th holiday week in a severely oversold condition and is ripe, under normal conditions, for a rally. But that's forecasting. The charts and fundamentals are saying something else, confirmatory analysis is suggesting that no matter what happens very short term, the credit and real estate markets are not done falling and one way to play that premise is to go long the SRS.

Great call here. I have some IYR Put options. Sounds like Shorting stocks like VNO may not be a bad idea...

Another great post….thanks for sharing.

Wasn’t it under Greenspan that REITS proliferated? Why? The cheap money. Real estate by it’s very nature is based on leverage and favorable terms. Fast forward to June of 2007 and the first signs of trouble…the 2 hedge funds at Bear Stearns go belly up. The repercussions of lax lending and excessive greed finally starts to rear it’s ugly head. What are we at now…500 billion in financial institution writeoffs?

Back to the Fed, if you were Jim Rogers you’d say, “Abolish it!”. But here in the US we operate on a “push button” mentality. We look for quick fixes.

Step in the academic, Ben Bernake. Starting in August 2007 he finally gets to wield his powers.

And that was just the primer….hemorrhaging accelerates in 2008:

In effect, his tourniquet of running the printing presses in Washington stabilizes the markets, but at the expense of trashing the US dollar.

But I don’t think OPEC is too keen on a debasing of their commodity. Sure is ironic that a barrel marched up to $140 while Bernake was doing his thing.

As the effects of this seep into the economy, (choking the consumer even more), don’t you think Bernake will have no choice but to raise rates and bolster the dollar?

Doesn’t seem to bode too well for REITS.