A pig in a poke

I'm buying SCA in the morning, because it was up 62% on Tuesday, after being down 99% in the past few years and with the hope it will be up 500% or more in the next few months.

A pig in a poke

An offering or deal that is foolishly accepted without being examined first.

Origin
'Don't buy a pig in a poke' might seem odd and archaic language. It's true that the phrase is very old, but actually it can be taken quite literally and remains good advice.

The advice being given is 'don't buy a pig until you have seen it'. This is enshrined in British commercial law as 'caveat emptor' - Latin for 'let the buyer beware'. This remains the guiding principle of commerce in many countries and, in essence, supports the view that if you buy something you take responsibility to make sure it is what you intended to buy.

A poke is a small sack or bag and is the origin of the word pocket. The word is still in use in several English-speaking countries, notably Scotland and USA. A poke is just the sort of bag that would be useful for carrying a piglet to market.

A pig that's in a poke may turn out to be no pig at all. If a merchant tried to cheat by substituting a lower value animal, the trick could be uncovered by letting the cat out of the bag. The advice has stood the test of time and people have been repeating it for getting on for five hundred years, maybe longer. Fraser's Magazine (1858) reprinted a piece from Richard Hill's (or Hilles') Common-place Book, 1530, which gave this advice to market traders:

"When ye proffer the pigge open the poke."

As for SCA, it is in incredibly complex financial waters, but today it traded over 3.7M shares, average is 700K, and it was up 62%. This flurry of buying came on the heels of an agreement to settle claims against it by Merrill Lynch, pertaining to debt that SCA had insured but now Merrill Lynch was virtually giving away. To go any further into the complex web of financial cross currents and entanglements that SCA is caught up in would be beyond the scope of any semblance of my understanding, so suffice it to say, SCA is a proverbial pig in a poke.

Apart from the stellar performance today, here is some very basic elements of the puzzle:

Next, the Balance Sheet 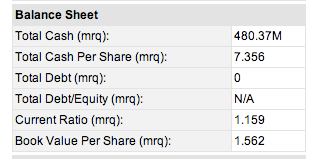 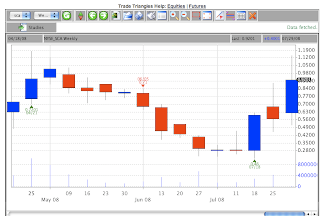 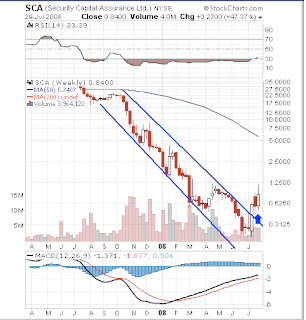 The Trade: SCA is followed by some pretty savvy traders that I know. They are suggesting that as of Tuesday's settlement with Merrill Lynch, SCA is worth somewhere north of $5.00/share. There are some who even talk of double digits for this stock. There may be some bona fide hype about to ignite these shares a lot higher in the days and weeks ahead. A lot will depend on factors that I do not understand, ergo the characterization of SCA as, A pig in a poke.

why oh why didn't I listen to you and buy this one at the open? Congrats... nice pick.

Allan:
Bought in pre-market...against my typical rule. Maybe we can "cut a fat hog" with this one. Thanks.

I've been reading your board for a few weeks now just learning. This SCA has been a juggernaut so far for me! I appreciate you posting your thoughts, they're all very useful and interesting.

Can you shed some light on how you scan the instruments using MC? What is the most successfull approach?

sam - should probably do an entire blog on MC, but until i do, try a market scan for 4 wk highs, filter the results as follows: Equity - Less then $20 - AvgDailyVol = Greater then 500K - US Exchanges.

Thanks a lot sir, You're geneous...
one more followup on MC.
How can one prepare the list of stocks after using the filter criteria in advance or night before using the trade traingles?
b'cause by the time you look at triangle most of them have gone up and are in the consolidation phase?

Is that genius, or generous, or both?

Remember, these triangle-signaled trades are based on weekly charts and as swing trades will usually last for several weeks, or even months. Being one day late-which is the most you should be late-should not impair your profits by a meaningful amount.

I meant generous!!! In my mind, you can be generous only if you're genius, which by default you are!!!

I bookmarked your blog a couple of weeks ago and decided to give this 'pig' a try on Thursday. Looks like a good decision (+37%). Will definitely be checking your advice regularly from now on, and also have a close look at the MC.

Thanks for your valuable info.
Greetings,
Tom
Denmark

Lot of action in SCA in after hours yesterday and today's pre-market with some news yesterday. Can you share your thoughts and update on this from you.
Thanks.

I bought SCA at $.41, it's been a great ride, I put my emotions aside and played a chance hand..Great so far.