Has the big picture changed since last Friday's post? 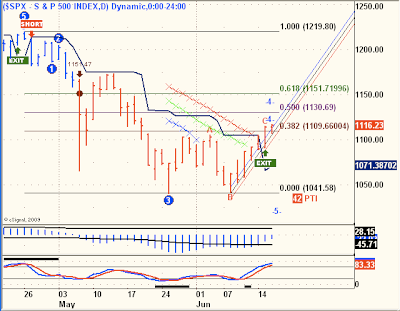 The above SPX Daily chart illustrates an Advanced GET set-up for a 100+ point SPX decline.  We have a measured 4th wave, an Elliott Oscillator almost to the zero line, a False Bar Stochastic about to flip over and prices into the Fibonacci reversal window.  A break now through the Trend Regression Channel coming up from the  "B" Wave low containing the "C" Wave advance will trigger the trade.

The market can keep advancing and cancel out this pattern, but it can also finally reverse and provide an excellent trade opportunity to the downside.  It should tip its hand in the next few days.

Is it possible,as a theory, that what happens to all these biotech/bioPharma companies trying to strike it rich with cancer drug sucess and FDA approval

run the extreme risk of blow up failure If/When their study fails,or fails to get FDA approval.

The failure may be like a sitting duck,just waiting to happen,If their strategic research process is flawed in its timeline approach,its evolutionary process....because they are 'too hurried' to bring their drug to market,or too hurried to gain FDA approval and hit the jackpot. ??

or is it they were just barking up the wrong tree in their research,like GNVC,trying a drug angle that didnt work.
something is going to work or its not.
but what if the strategic problem involves trying to rush the research ,rush the idea,sticking with a failing idea, instead of being careful,patient,and flexible in their research.

This is all just day dreaming on my part.... but it makes me wonder
if its actually a good strategic thing for a company like NNVC to stay patient,make sure the research proves correct, let it evolve,and when it does....a true winner will be born.

If someone could do a good study of failed enterprises like CRIS and GNVC,their failed studies,failed process, etc and contrast it with NNVC,BTIM,ISCO and any other companies which are succeeding,might yield some valuable insights.

From your chart above, the tape could easily fall out of the channel if it 'STOP' going up, e.g. sideway. Right?

Thanks for sharing your thoughts.

despite anyone's charts and indicators
(including my own)

and those selected into the bilderberger club

it all depends on what the government elite global controllers want.

this is what the whole rigged game is about now.

my opinion for what little itz worth

As the big picture shows

boosted by big bursts of buying ,at critical support,always ,it seems ,in the nick of time, at 3:30 late in the afternoon, propelling market back Up, or following the big sell off at 3 pm,the stick save at 3:30,and/or the big push Up at the opening next day's trading.

When you take a good look at a 5 or 10 day chart in short time frames like this, you see this pattern repeat all the time.

are keeping this upward rally alive,with stick saves at end of day or first thing next morning.

When one learns to recognize what it looks and feels like to see it ,happening right on cue, the last week of trading has displayed alot of this.

including two or three times, drops below the 1110 price point Allan has marked as critical.(see 'SPY - 30 minute' post below)

For some months now,the whole rally of last year showed this kind of 'stick save' action,always at critical moments of trendline breach,
always following the market sell off from failure to make higher highs .

Retail investors ,rightly so, are selling the rallies,at the slightest topping failure .

Who is buying at these stick save points?

when the market peaks here at 1118 and begins to sell off, what retail investor/trader in his right mind is deciding to Buy (anything) at 1106,at 3 in the afternoon,before the quadruple witching day...etc

My point is this market ,you either believe it is legitimate and basically free flowing

or it is totally owned operated controlled and manipulated by the government/JPM/GS supercomputers engineered to do whatever the government wants it to do.

and watching the market action this last week shows THEY want it to go UP.
target appears to be 1130 area.for now.

Many times, this last week, you can see, the true sentiment was selling down hard at all topping failures.
Somebody has to have held the failing market up at critical points. several times it happened,right on cue,in the nick of time.

Now who could do that ?
Are these stick saves just 'dumb luck' ?
the random luck of market uncertainty?
Please.....

Its a Rigged Game.

There is an element of luck we can attain.If we pay close attention,we might realize just a few clues They will leave us,as a signal of what They plan to do.
Sometimes, a clue might be found in watching a short term chart on 5 minute time frame,the sell off at 3 pm,followed by a big surge at 3:30,exactly in the nick of time,right on cue.looks and feels like a complete abberation from the whole days trading action.
You can see the manipulation up close this way,in a chart.

other times, you can get a slight clue from watching the news,geopolitical issues,the grand chess game....something jumps out at you,that looks and feels 'funny'

These passing weeks, theres been something 'funny' about Oil.and BP,and the euro collapse,and whatever comes next as a result of it.

I love the idea of a trading system.

but I fear that no system can outsmart or be one step ahead of ,or keep pace with the government as THEY execute their grand Plan.

If were lucky we might keep one half step behind,and still do ok.

I think the current 'clue barometer' needs to be watching for all the 'stick saves' to happen always at the right time,in the nick of time, when logic says it shouldnt happen....and your trading system gets whipsawed again because of it.
It means THEY just took one of your pawns. as They play out their grand chess game for the markets.

Though I am not saying you are wrong...it makes trading these days ominous.

Maybe a skilled trader can do well, but I say a novice might lose his shirt.

Why, pray tell, do the games play out? I'll tell you. Because this country is about GREED. Fill their coffers and let the middle man become the poor man and let the elite rule this disillusioned country..better still..this crumbling world in the future.

If there is any truth to what you say....I pity the kids of today, for they shall be the leaders to a sick greedy world tomorrow!

If you recognize that whoever is in control wants the market going long, then you know your next move.