....and finally, our main squeeze 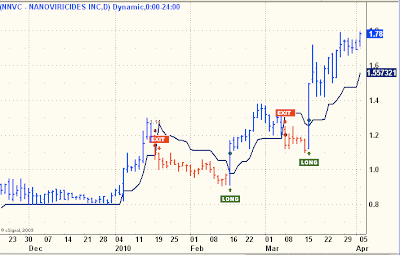 NNVC Daily Trend Model
Posted by A at 7:03 AM

I have a question though, will the "Basket of Income" cause the death of the "Trade of the Week"?

Consider the ten names our 'Trade of the Week" for now.

I am watching something now very closely that may go out as a new recommendation for the week, but I am waiting for the trigger before sending it out.

let us watch with you we non subscribers

I've got the GS April 165 puts. The stock looks like it may be bottoming after a pullback.

Less than 10 days to go. What do you think? Cut loss or hold on?

GS is about right where it was triggered SHORT, so its really an option issue, as it is easy to hold on to a Short that is b/e, but not so much options that have lost a big chunk of their time value.

Cut loss or hold on? I think GS will be lower at expiration then it is now, but have no idea how much lower or the effect on those puts.

This is could be the harbinger of the end of the cyclical bull run of biotech & drug sectors. This also happens to coincide with Allan no longer spotlighting bear ETFs; nor Allan paying homage to Robert Prechter.

Alternatively, in a longer time frame, it could also be signaling le changement du garde as the world gropes deeply into this decade; and in this respect, consider NNVC being a behemoth like Pfizer will be once was.

be careful with NNVC right now....the chart action looks like subwave 4(sideways) of 5 of 5 now .
wherever the next blip up goes to target,might finish 5 waves, and turn a good correction from this before it runs much higher.

this Patrick Cox guy sounds like all hype...just keep GNVC in mind when investing Biotechs that tinker with cells using DNA technology!! IMO.

1)GNVC is not one of Patrick Cox's newsletter picks.
2) He is not any kind of hype artist,but if you dont subscribe to his newsletter you wouldnt know that.
3) its clear that youre not a subscriber to his newsletter because you'd never say that about him if you were.
4) his research and writing is sharp,strong,clear,well presented, and invaluable.


I will add that his picks do include some homerun winners,among them are ISCO,NNVC,BTIM,...that gives you some idea.

I find his newsletter to be very informative and trustworthy.

My 2 (only two in my entire portfolio) Losses so far,are GNVC and CYTX....neither of which came from Patrick Cox... both were my own stupid choices,from lack of due diligence.

He has a few 'losers' ,because he bought them in early 2008 and they collapsed with the crash....but the research and fundamental stories are compelling for most of his picks.

some of his other picks are lagging,but this one star player more than makes up for it.

what I like best about your post is that you contribute Nothing to the discussion. which allows me to contribute everything.
Cheers.

Curious question for you,

dont you have any interest in precious metal mining stocks?

any interest at all?

I think its an important sector to be invested in.
equally as important as biotech.

But I never see anything from you about this sector.

Allan, if you have a chance, any thoughts about AVXL ? what the chart looks like? long ,short, ?

I still feel Cox is all hype when he speaks about biotech tinkering with cells using DNA technology. I neve said Cox picked GNVC but investors should be aware of what happened to GNVC as they were touting DNA technology !!!!!!!

So you are an authorty on Cox's research and news letters?? Great keep it to urself!! Huh!
"what I like best about your post is that you contribute Nothing to the discussion. which allows me to contribute everything."

Ignorance is bliss!! So by, bye Mr Ignoramus!!

Patrick Cox's "analysis" contains many errors on NNVC, so "sharp and clear" aren't the words I would use.

Errors include saying NNVC is getting grants for its work (it has not) and that "more than 99% of seasonal flu viruses have developed resistance to Tamiflu, according to the CDC" (no, the CDC never said that).

Other examples of falsehoods: saying Walter Reed is evaluating drugs for Ebola and Margburg (not yet) and that NNVC has an "HIV program on contract at the Armed Forces Institute of Pathology" (a truly meaningless phrase if I ever heard one - no testing going on there now, either).

The monster lie is that NNVC is shooting gorillas with blowguns for animal testing with the World Wildlife Federation. The WWF denies this is happening.

Finally, sentences such as "This is like defeating a besieging enemy army with withering fire before it’s forced the city gates or undermined the defensive walls" are not cogent analysis.

They are pure hype by Cox.

why dont you write directly to him thru agora and let him know of all these errors. that deserves a response from him, and as a subscriber, I would surely be interested and congratulate you on good investigating follow up.

Shall you write to Patrick Cox? .... since youre the one making these claims of factual error.
this would be very good due diligence on your part for us all.
sincerely,t