Absurdism is a philosophy stating that the efforts of humanity to find inherent meaning in the universe will ultimately fail (and hence are absurd), because no such meaning exists, at least in relation to the individual. - wikipedia

This is my version of a DJIA monthly chart that appeared last week in the Elliott Wave Theorist.  Using the definitions of a Head & Shoulders Top, by Edwards and Magee, this analysis targets an ultimate price objective, "below zero." 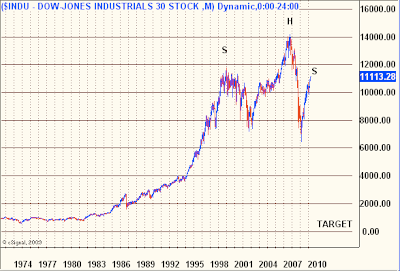 Seems like we can miss the first 1,000 points and still do pretty well, although I suspect the Daily and Weekly Trend Models will both flip Short much sooner then that.  More interesting would be what fundamental phenomena could by any stretch of the imagination generate this kind of catastrophe?

For all the worldwide chaos that Iceland's volcano has already created, it may just be the opening act.

Scientists fear tremors at the Eyjafjallajokull (ay-yah-FYAH-lah-yer-kuhl) volcano could trigger an even more dangerous eruption at the nearby Katla volcano – creating a worst-case scenario for the airline industry and travelers around the globe.

A Katla eruption would be 10 times stronger and shoot higher and larger plumes of ash into the air than its smaller neighbor, which has already brought European air travel to a standstill for five days and promises severe travel delays for days more.

The two volcanos are side by side in southern Iceland, about 12 miles (20 kilometers) apart and thought to be connected by a network of magma channels.

Katla, however, is buried under ice 550 yards (500 meters) thick – the massive Myrdalsjokull glacier, one of Iceland's largest. That means it has more than twice the amount of ice that the current eruption has burned through – threatening a new and possibly longer aviation standstill across Europe.

Katla showed no signs of activity Tuesday, according to scientists who monitor it with seismic sensors, but they were still wary.

Pall Einarsson, professor of geophysics at the Institute of Earth Sciences at the University of Iceland, said one volcanic eruption sometimes causes a nearby volcano to explode, and Katla and Eyjafjallajokull have been active in tandem in the past.

In fact, the last three times that Eyjafjallajokull erupted, Katla did as well.

Katla also typically awakens every 80 years or so, and having last exploded in 1918 is now slightly overdue.

As if the world's increasingly violent weather weren't enough (See previous article), the BBC is set to air a two part documentary on the potential threat of mass destruction posed by "Supervolcanoes."

The program, which will be aired in the U.K. March 13 and 14, describes the phenomenon as the accumulation of massive amounts of magma beneath the earth's crust. Unlike garden-variety volcanoes, such as Mt. St. Helens, Supervolcanoes "begin life when magma rises from the mantle to create a boiling reservoir in the Earth's crust. This chamber increases to an enormous size, building up colossal pressure until it finally erupts."

The program focuses on a region that Americans know well - Yellowstone National Park. Under all those geysers and hot springs lies a pool of molten rock, which could become a supervolcano. Even though, as the BBC points out, "Only a handful exist in the world, when one erupts it will be unlike any volcano we have ever witnessed. The explosion will be heard around the world. The sky will darken, black rain will fall, and the Earth will be plunged into the equivalent of a nuclear winter." The potential death and destruction caused by such an eruption is virtually incalculable.

So it looks like three years of shoulder to come; is that the conclusion.

Does the quote on Absurdism relate to EWI's scrawny shoulder? ;)

Zero value implies the profits from US corporations is zero or negative. This also implies the end of the world/economy as we see it. The powers that be, would not want it happen. Unless this is a non-economic trigger, like a WW3 scale event.

Wouldn't bet on this pattern unfolding.

head and shoulders....the most useless of all technical indicators. You ought to know better.

Chill out chief, I'm not suggesting it, just showing it and providing some food for thought, it is damn boring out there if you haven't noticed.

Allan you are my hero for saying chief! Haha!

How is it a useless indicator? When you have so many people that make trades based on that kind of analysis (head & shoulders, EWI, fibonacci, ceterus parabis) by playing along you really can take advantage of the manipulation. Atleast I've come to find that to be the case.

The H&S pattern becomes substantially more reliable when taking into consideration patterns that span over long periods (in this case decades) as this one does. What Allan's chart leaves out is the accompanying MACD to confirm that the left shoulder is stronger than the head which is in turn stronger than the right shoulder.

From what I can see, it does not confirm the pattern, thought that need not be a deal breaker for the H$S to play out. As for the thesis that TPTB can forestall or prevent such an outcome. We don't know if they can, but we do know the following:

They did not prevent the savage decline from late '07 to early '09, and they can not prevent all manner of natural and unnatural phenomena from occurring that might conceivably be far too powerful for their considerable, if substantially depleted, wherewithal.

Citigroup RSI is at a place it hasn't been in years


" None of them knew the color of the sky. Their eyes glanced level, and were fastened upon the waves that swept toward them. These waves were of the hue of slate, save for the tops, which were of foaming white, and all of the men knew the colors of the sea. The horizon narrowed and widened, and dipped and rose, and at all times its edge was jagged with waves that seemed thrust up in points like rocks. Many a man ought to have a bath-tub larger than the boat which here rode upon the sea. These waves were most wrongfully and barbarously abrupt and tall, and each froth-top was a problem in small-boat navigation. "

Reuters reports that according to South Korean intelligence, the Cheonan ship sinking in late March is due to a torpedo fired by a North Korean submarine.


Eduardo said: "they can not prevent all manner of natural and unnatural phenomena from occurring that might conceivably be far too powerful for their considerable, if substantially depleted, wherewithal."

and you will see what stocks chess master Benjamin M. Anderson was buying at the NYSE on the even of WW-II.

he also writes in such a way that he is describing a market tone which is not unlike what Allan appears to be feeling now.

notice his last paragraph and warning not to use margin for stock purchases.

he bought Lehman bros.
and other things.

he also expected FDR would not run for an unprecedented 3 rd term....

not sure how valuable,or similar, this historical account is in relation to today. interesting to note, but not sure its very relevant.

Stock trading based on possible volcano eruptions. Not too desperate...

Forgive me if I don't consider these events "in tandem"... but then, we could worry about the supervolcanoes.

...when one erupts it will be unlike any volcano we have ever witnessed. The explosion will be heard around the world. The sky will darken, black rain will fall, and the Earth will be plunged into the equivalent of a nuclear winter...

I'll go out on a limb and say the markets will head down if that happens.