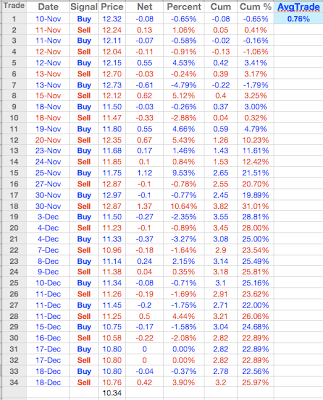 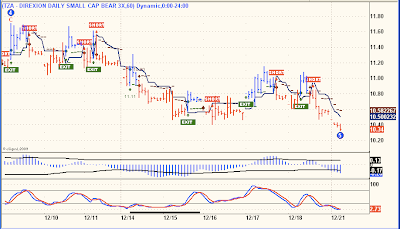 My eyes are immediately drawn to November 30, 2009 when the high equity print of the system was established at +31%.  The weeks following this equity high have essentially been sideways.  The good news is that after five weeks, the system is up 25%.  The bad news is that there is still not enough of a real time (real money) track record to distinguish this performance between the extreme boundries of randomness and holy grail.

The real good news is that this system was devised on the run, has not been tweaked and is making money.  Behind the scenes I have improved the system by changing from an always-invested methodology to a cherry-picking scalp strategy, whereby an average of 3-4 trades per month that last only 1-3 days (on average) garner the same high level of returns.  By being out of the market for most of the month, this newer version becomes a much less risky proposition to trade.

Below is an example of this new trading strategy, with an actual BUY SIGNAL on SPY late last Friday.  The gain is +1.0% as of the first 30 minutes of trading today (without leverage) and it looks like this system trade will exit at or before today's close. 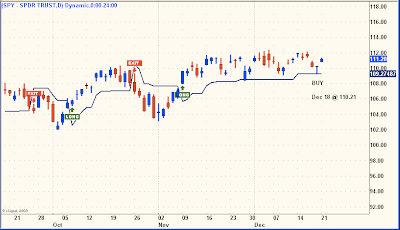 Thanks. It sounds like this system may prove interesting and profitable.