No, not the unemployment rubbish.  The TZA System finally got blown out of the water on a trade and we get to put all of the pieces together and see what is left standing: 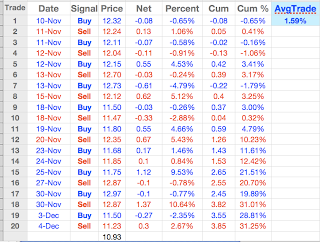 Hi Allan,
How do you manage to put the ATR line on your chart?
If we take the formula from here, for example, the ATR values will be roughly between 0 and 5. No way it can be so close to the signal (unless you add the current price or the mean or something to the ATR).

Are you using a different formula, or do you just add the current price or a moving average to the ATR, to have the ATR line following the price line so "closely"?

Thank you, and keep up the great job!

I am using an ATR formula that was published in Stocks & Commodities magazine. Don't have time to find the link right now, maybe someone else has it handy.

Maybe theres something to consider about anticipating