I am preparing my managed accounts for a market debacle in 2010.  Below is the Monthly S&P chart annotated with wave counts, false bar stochastic and fibonacci retracement levels which paints the big picture set-up for what should be a typical deceminal pattern year. 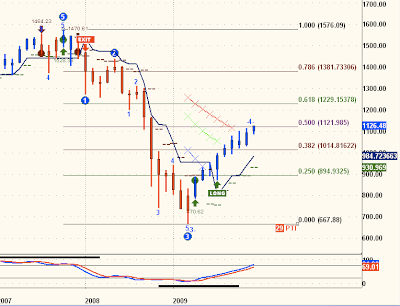 Here is a brief write-up by Robert Prechter on the Decennial Pattern, taken from the October, 2009 Elliott Wave Theorist:

"Back in the 1920's Edgar Lawrence Smith  found a reliable pattern to the decades that he called the Decennial Pattern.  One if it's prominent features is a price high in the "9" year.  We usually show the composite pattern, but it is instructive at times to isolate a feature of the pattern, as in [the chart below]. The arrows pointing downward show peak prices in the "9" year of each decade going back more then a century.  Observe that in ten our of the past eleven decades, the "9" year contained a high price.  In only one instance --1949--did the year contain in important bottom.  And no one could possibly mistake today's market conditions for those of 1949 given that year's record low P/E ratio, high dividend yield, bearish economists calling for a post-war depression and the public's general disinterest in stocks. We are clearly at the other end of the spectrum, i.e. the normal optimistic end for the "9" year.  And the year is nearly over.  If the Decennial Pattern holds true as it has done so often, then stock prices over the next three to five years will be down." 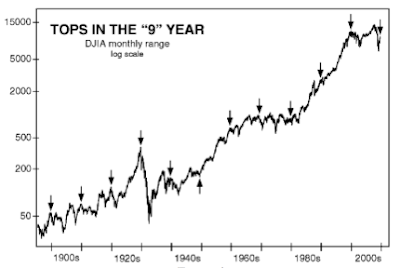 The above analysis is predictive in nature, not the the stuff that a profitable trend following strategy is built upon. What it does do is establish an effective, "what-if" scenario, i.e. what if the trend does turn down, what can be expected, how serious will the decline be, how heavily does one play the new down trend?

2010 should be a very negative year in stocks, probably much worse then the 2008-2009 decline of about 50%.  Fundamentals aside, EW and cyclital analysis is pointing toward a down move relatively more severe then any we have seen in decades.  When and if the trend models kick in, it is time to take advantage of a once-in-a-lifetime opportunity.

I am willing to pay the price of a couple of mediocre years returns for that one stellar year where all of my big picture analysis comes together and is ignited by a turning of my trend following indicators.  Nonetheless, we have had some nice winners this past year or two, despite my skepticism about a sustainable rally.  So in the weeks and months ahead, I will continue to do what I do best, isolate special situation stocks that are worth a shot no matter what direction the market is going, but always keeping an eye on the big prize, the riding of a super-nova wave in stock prices, in a direction and in a manner and velocity that takes everyone by complete surprise.


My best holiday wishes for all who grace these pages with your time and support.  I am working on some new ideas for coming year that will be new for me as well as my readers. If you want a head start, simply read "Why are you here," on in the right again, placing proper emphasis on the number one reason for any of us to be on this site.

many thanks again for everything.

Kindness and integrity is a great and powerful combination.much to be admired and sought after,cultivated and shared.wherever one might find it.

... nervous, about the future,time grows near,how can you not feel it, simmering,lurking around the shadowy corner,like the corners we've seen and worried about before.how many dim corners can we turn past ,without the stumble,the fall,the cold wind we see in the dark clouds ,in the distance,heading our way,...
another turn ,around another corner,close tight to the cliff, signs blowing in the wind, the quiet before something. the hollow words of the wizard telling us not to worry,nothing but blue skies,....

what was it I should do again?
I forgot.
is it gold? gold and silver? and the miner stocks? and ....maybe those things,what are they called....Swiss money ,what? claims? something like that?
a small piece of land in a rural part of america,away from big cities?
a good chunk of cash hidden at home? a good supply of freeze dried food in the basement?

I'm already getting tired and weary just making the list.

How do I sell it and make a profit at the right time?

Who will buy it at such a time. Wait,where did I put that case of army freeze dried peas?

Is my bank safe?

I know the FDIC is a fraud,broken,...many more banks going to fail.

Dont buy any more stocks,stop thinking buy and hold. I must be stupid,what am I doing.

maybe a few more.
and thats all.

keep the rest in cash. Cash is King.

I have to know how to short the market.
Just the simple way to do it. The Inverse ETF's.

"I will continue to do what I do best, isolate special situation stocks that are worth a shot no matter what direction the market is going, "

I look forward to that.

this I'm not so sure of Just my opinion as a fan and reader. ? Since you ask for donations and the only ones recieving your new ideas wouldn't this site in eccence be consider a pay site. I would miss your comments and insight.

Losing it,
Loved your piece. Can identify closely with it....thanks

Thank you all for remaining so bearish! You have me much coin as this market continues marching higher and higher...wink, wink.

Thanks for a great year Allan.

If anyone is interested, there's an incredible debate between the deflationists and inflationists on the Financial Sense Newshour podcast:

The deflationists are represented by Robert Prechter and Harry Dent. The inflationists were Peter Schiff and Marc Faber.

It is a four hour podcast but it is very thorough and worthwhile. I've read Prechter's and Dent's books, as well as Schiff's. After listening to the podcast (twice) I reaffirmed my belief that both camps are right. We will have deflation and then inflation. Even Prechter acknowledged that there was nothing to prevent the government from inflating after deflation has its way, but he said what happens later is secondary to surviving the coming wave.

On the other hand, Dent said the Fed is way too self serving to allow run away inflation. Dent said the market decides what a currency is worth, so there won't be a devaluation like you could have with a currency backed by gold. The problem with Dent's argument is that Fed is powerless to stop the destruction of the currency through debt. We already have a crushing debt load in short term debt and we keep adding more. All the cleverness in the world regarding keeping the money supply under control is wasted if the government backing it is bankrupt.

The bottom line, in my opinion, is that everyone is talking about the long term but Prechter. Prechter's advice concerns what is going to happen next, and if you don't focus on what happens next, you won't have any money to invest when and if inflation sets in. All four of the interviews seemed to focus on the dollar and the price of gold as indicators to where we are in the process.

I'm in Prechter's camp. After the market crash in 2010, after the dollar skyrockets in 2010, the dollar will be pulled down by the market because the US is a bad credit risk. Until then, it's a long the dollar and short stocks trade opportunity.

Global markets are extremely susceptible to geopolitical risk at the moment, which should, if triggered, set out the path to deflation, or inflation, or both, as ramifications set it. Time for all of us to keep our heads up.