KMKCF was written up last October at $1.42.   Although up a nice 35% since the initial write-up, much more on the upside is expected. 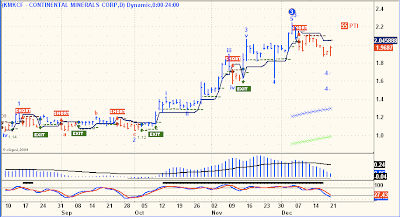 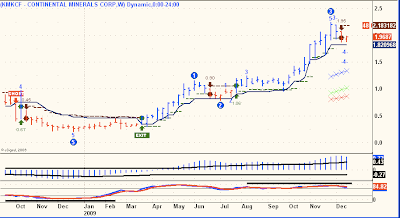 Tom Bishop, who generated this idea, has justed named KMKCF his Stock Pick for 2010.

"Continental Minerals (KMKCF ($1.97), which I believe is a juicy takeover target, is located in Tibet/China and has proven up 220 million tons of measured and indicated reserves in its high grade-porphyry copper-gold Xietongmen deposit grading 0.43% copper and 3.9 grams of gold per ton. This translates into 2 billion pounds of copper and 4.3 million ounces of gold. A feasibility study has been completed and the project has received all 16 sub-approvals and is now in for final approval. In addition the Company’s Newtongmen deposit, a couple thousand feet away and drilled off more recently, sports another 2.8 billion tons of copper and 2.3 million ounces of gold and 11 million ounces of silver. "


Looking at the above charts, by now most of my readers should recognize the Advanced GET Mechanical Trade #1 Set-Up (a/k/a Wave 5 Buy Signal)  on the Daily chart.  A move above $2.04 will trigger the Buy Signal.

Many thanks, Allan for this one.

hmmm....is that a december 3 "full moon reversal" I see on that daily chart ?
interesting.

Thanks for the update on this .It looks like a winner.
Still,I want to wait for a little more pullback. i'm stupid that way.