NEOWAVE’S GLENN NEELY RELEASES POSITIVE FORECAST FOR REMAINDER OF 2010: S&P TO RALLY NEXT 2-3 MONTHS
Positive Forecast Built on Foundation of
Precise August/September Predictions in NEoWave Services
September 28, 2010 – NEoWave Institute’s Glenn Neely, internationally regarded as an
Elliott Wave innovator and creator of NEoWave technology, believes the S&P’s near future is surprisingly positive with a probable gain of 75-100 points.
“The S&P will continue to move up or sideways for the next two-to-three months. The market has transitioned into a General Predictability phase, based on NEoWave principles, so I’m now able to map behavior for the rest of this year,” Neely says. This bullish market behavior may take many by surprise, he explains, given the market typically declines in October. “By late 2010/early 2011, the S&P will closely approach – or exceed – the April 2010 high. As a result of increasing valuation, I expect economic conditions to improve for the rest of this year,” Neely says.

Neely built this short-term bullish forecast on his recent, on-target S&P predictions in August and September 2010. As shown on the recently released NEoWave chart, he forecasted a sell-off, quickly followed by a steep uptrend. The dashed-red line on the chart below presents Neely’s recent forecasts (the solid-blue line shows actual market action). 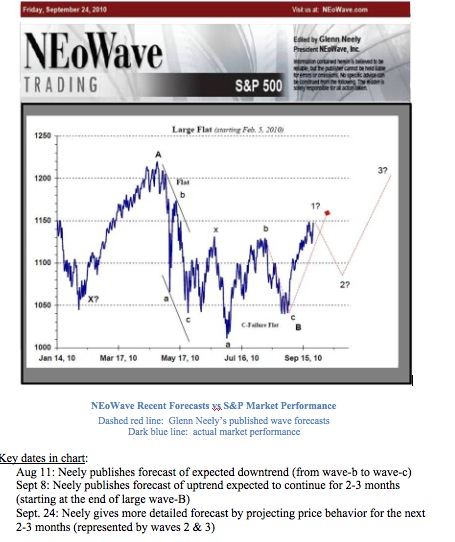 This is more like the projections Ive been seeing as well in my own charting.
My own target top is 1180 area on S+P. ...course I'm no authority,but thats what the charting showed me.
T

off topic but here goes:

What is up with nnvc? Nothing from their presentations last December seems to be happeneing. Still no web site, no IND app, no uplisting to major index. Starting to wonder just what is up with this company.

The are focused on advancing their science out of the lab and into animals, all in advance of an NDA. With limited manpower, I suspect their priorities are addressing the science, not investor relations. OK by me, in fact, I like it just the way it is, under the radar but on top of an array of blockbuster of anti-virals. This is not a trading stock, but it is a stock with unbelievable potential .

Which camp are you in Allan? Obviously, that is a question more for discussion than strategy, because I know we take our signals for trading purpose. (although I could kick myself for not taking the last daily signal).

First and foremost, I am in the trend following camp which as you know, covers both sides of the aisle.

As I wrote to my subscribers recently, when this leg of the rally is over, I expect a horrific decline. The way to trade it is to wait for the intermediate trends to turn down and then get on board for what should be a heck of a ride.

But as I wrote above, we have to wait for the current bullish trend to end before that opportunity arises. That puts me kind of in both camps.

Many months ago I had an e-mail correspondence with someone who was senior management at NNVC. I offered, in so many words, that their website was, terrible, and he (his name escapes me) agreed. Since then they have done absolutely nothing about it. I wouldn't put one more dime into NNVC, and will sell every share before I take a loss in this company. I'd say it's far more likely they will cease to be around in five years then that they will be selling at vastly higher prices.

This NNVC website fetish is remarkable. Would it be better to have a slick website with no scientific accomplishments to place there?

If an individual is that concerned about the NNVC website then perhaps selling every share, or not buying them in the first place, is appropriate.

the web site is just one example of a list of broken promises dating back a year.

wasn't an ind app supposed to happen this spring

tell me where i'm wrong

Exactly. It is noting to do with any sort of fetish. NNVC's website inaction is symptomatic of much greater problems.