The folks at Elliott Wave International are pretty certain that the equity markets are in a multi-month Primary Wave 2 Up. I understand their analysis and have a hard time arguing with it, but, will anyway.

Here is my Nasdaq Weekly chart going back to the beginning of the Bear Market: 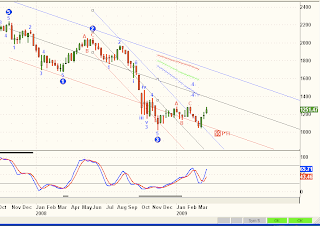 Please note both Waves 2 and 4 on the above chart. Wave two is a simple affair. Wave four is much more complicated. This satisfies the Rule of Alternation, which suggests that if Wave 2 is a sharp correction, expect Wave 4 to be a sideways correction, and vice versa. (Frost and Prechter, The Elliott Wave Principle, page 63)

I've drawn two regression channels on the chart. The big one is down from the actual start of the Bear Market. The smaller one is a Wave 3 channel, down from the end of Wave 2. While prices have risen to break out of the smaller channel, they still have a long way to go to the top of the bigger channel and still haven't crossed the mid-section of the big down channel.

Despite all the bullish hoopla recently, the Nasdaq has basically gone sideways and appears to be quite overbought. Below is a Daily chart of the Nasdaq: 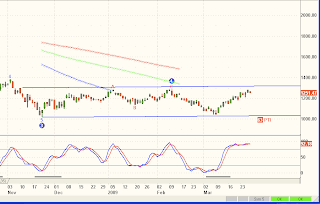 Near the top of it's sideways channel and an overbought stochastic.

Below is a bearish wave count, suggesting that Wave 4 is about over and the next big move is down:

I know this analysis is in the minority right now. I know a lot less about the nuances of Elliott Wave then the big guns in Gainesville. But these Nasdaq charts are cautioning me that all this bullish sentiment out there ("largest monthly gains in history") is a fade.

Something to think about.

Allan,
Great post. Do you think NASDAQ will enter the upper band in your first chart? In order to do so it can remain flat or can go up.

Do you have similar sentiments for S&P and DOW?
Thanks
Inq

"...sentiment out there ("largest monthly gains in history") is a fade."

No, fade the market (sell)

Go the other way, i.e. as sheeple heard off the cliff, back off from the crowd and turn around.

A individual that forfits their right to choose in favor of inclusion in groupthink and what is viewed as popular or elete group. Allowing the influences of different forms of media and group members to hold great sway in the formation of attitudes, behavoir and opinion.

To accept the group mentaility and opinion as fact without examination.

Not only to be told what to do, but accepting the paradigm of thought as absolute thereby removing the weight of personal responsibility in the making of decisions.

Does Blue Wave and Elliott Wave software actually put the wave counts on your charts or is that left for you to do?

If it's the software and Elliott Wave International is correct in calling this primary wave 2 (up trend) will the software auto correct.

If so how long would that take?

The charts that are posted are put together by me, using add-on indicators from Advanced GET for EW counts and Blue Wave Trading for the BW indicators, both specially purchased for eSignal. It's an expensive set-up, but, it's my business and putting money into your business is one of the best investment alternatives out there.

As for your second question, the EW counts from EWI (Prechter's business) and Advanced GET are completely independent. EWI utilizes a vast knowledge of EW rules and guidelines to interpret and choose among alternative wave counts, determining what they consider to be the most probable of several potential patterns.

Advanced GET, the wave counts you see on my charts, are generated by the algorithms embedded in the software, which by their nature must be objective, rule-based conclusions. It's unlikely that this process will recognize a Primary Wave 2 up pattern until well into the pattern. But it will recognize a completed five waves down and an new uptrend, initially with an ABC correction count that then morphs into a blue impulsive up pattern. It's not there yet, as it still sees a Weekly pattern that is incomplete to the downside.

Coincidentally, Prechter sees this incomplete five wave down pattern as well, but considers it as his top "Alternative" count versus his favored count as Primary Wave 2 Up.

Based on my experience using Prechter since the mid-1980s and Advanced GET since mid-1990's, there is about a 50-50 chance on which count will prevail. As the coming days and weeks add more price action to the equations, one of these two leading counts should emerge as the more probable of the two.

I will be following both, looking closely for tells as to which one will prevail.

The folks in Gainesville, GA are a long long way from being excellent let alone infallible. And that's just one reason to fade them, the others are in the technical data and charts.

ahhhh, fade, got it.

This was is a tough one to call. Looking at the Dow chart from the 9088 high or end of the intermediate 4th wave, I could not count 5 waves down, completing 5 of primary 1.

We are in no-man's land as far as EWT is concerned relative to the DJIA. Most of the time you can have a good count, but sometimes you can't. I think it is the latter.

If anyone disagrees, I'd like to see your Dow wave count.

No need for fancy crazy mindnumbing analysis. Can tell from today's action market is now going DOWN. By the end of the week, we be testing 7000. TRUTH!

I think the gigantic 5-wave up and the ABC that we are tracing out speak for themselves. It wasn't that long ago that every 5-wave move was down...that has changed now and hence the trend has changed.

I just figured it out. Allans' alias is "Anonymous". He is his own critic! Allan, please give us more profound critiques, something that might cause us to really doubt your wisdom. Thanks, Joe/NYC