Markets and a new pick

First, on the markets: This Wave 4 rally from the November lows is getting long in the tooth. I have no idea what that means. All my teeth are about equal in length, at least that part of them that I can measure above my gums.

So let's type long in the tooth into Google and see what comes up:

long in the tooth

to be very old. Don't you think she's a bit long in the tooth to be a romantic heroine?
Etymology: based on the idea that teeth grow longer in some animals as they get older
Cambridge Dictionary of American Idioms © Cambridge University Press 2003

Okay, that's what I thought. Unless this rally picks up speed and size soon, the equity markets will be toast again. (Toast = New lows.)

While waiting for that to play out, look what I found, a breakout in copper and copper stocks: 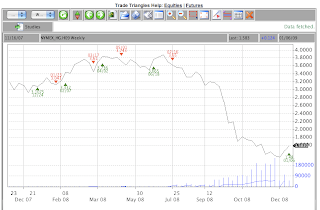 There are several copper stocks to choose from , but fundamentally my favorite copper mining stock is Taseko Mines - TGB 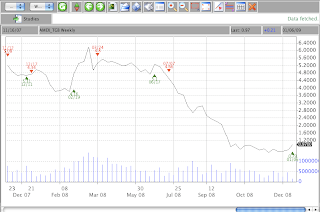 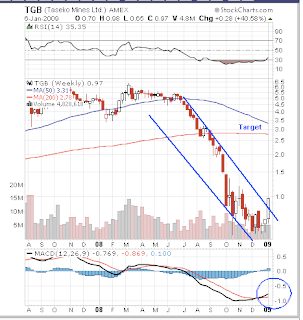 Note a few important features of this chart. The Breakout, of course. The MACD Buy cross-over, naturally. But look at the moving averages, about half way up the entire decline. A typical retracement of 50% here is a triple, +200%. 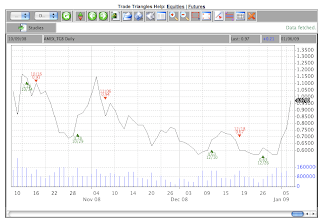 Copper is breaking out, currently about $1.58, it is cheap by historical measures, 1/3 of where it was one year ago. TGB is breaking out, all reward measurements are up in the 200%+ range. When copper was $3.50, TGB was $6. Along with copper, TGB is sitting on millions of ounces of gold. My valuations are based on copper only, the gold is thrown in to boot.

also. She said she liked living at home, and she was saving money to boot.
Cambridge Dictionary of American Idioms © Cambridge University Press 2003

Rise in Copper often seen as a precursor to a rise in the Markets....could we be turning? Gary

It will be pretty hilarious if the bottom is in. Personally I think we need another wave down to spx 600 or below, but the market likes to make fools out of all of us, myself included, so watch it rally now to 1100 and beyond. That would be a hoot, all of us naysayers would be left in the dust, missing out on a big part of the mother of all bear market rallies.

I think the rest of this month should tell the tale. Obama does seem to have the magic touch, whenever he speaks, the markets rally. So until that starts to wear off, new lows will just have to wait.

Gary & in the mountains: All of the trade ideas you will find here have one thing in common--a high, very high payoff if I am right. That pretty much means that I only need be right half the time, maybe even less, to ring the bell. Oh, geez, that last metaphor messed me up. Let's start over.

Gary & in the mountains: All of the trade ideas you will find here have one thing in common--a high, very high payoff if I am right. That pretty much means that I only need be right half the time to realize significant returns. There are other ways to make money in the market, there are lots of ways, this is the one way I've chosen for this blog, so what may at times seem like opposing bullish and bearish scenarios, are all really just one scenario, high reward trading.

i wonder if im late but im just in at 1.o5 tgb
serge

is it over now with tgb?
the weekly chart is still signaled buy on triangles and there is no sell triangle for the daily chart
what do u propose?
serge