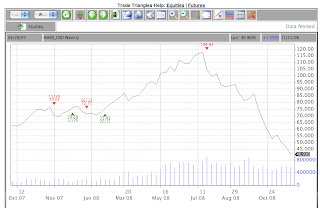 Let's start with the USO (Crude Oil ETF) Triangles Chart. I haven't been trading this one but want to include it here because it illustrates just how well the Triangle trading system works. In roughly the past twelve months there have been five trades on the Weekly chart. The first three were all modest losers, whipsawed out of trades as Oil sought to establish a tradable trend. Then on February 11, 2008 a Buy Signal at 73.43. This was followed by a Sell signal on July 18th at 106.83. This Sell is still in effect today, with USO at 40.91. A few modest losses and then two grand slam home runs, back to back. What more can we realistically hope for in a mechanical trading system? 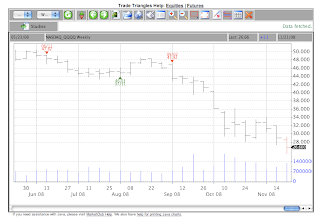 Above is the chart of the QQQQ (Nasdaq 100 ETF). The Sell from September 2 at 45.92 is still in effect. I chose the bar chart for this format to point out that a Weekly Buy signal is far away, above the 32 level for this coming week. The Q's finished Friday at 26.66 so it would take about a 20% rally to trigger a Buy next week. Unlikely, but good to know just in case. 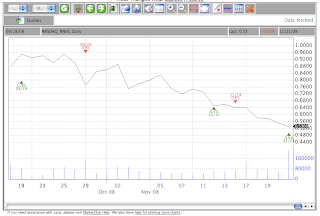 Above is a Daily chart of NNVC. This stock is one of the few that I have found that trades much better on the Daily charts then the Weeklies. For what it's worth NNVC triggered a Buy this past Friday and if you were following the bar charts, you could have anticipated the Buy Triangle appearing upon a break-out on the Daily bars, which occurred on a spike up in price just after Friday's Open. The Triangles don't distinguish between spikes to new 3-period highs or modest pops above three-period highs. The beauty of a mechanical trading system is that there isn't much thinking involved. 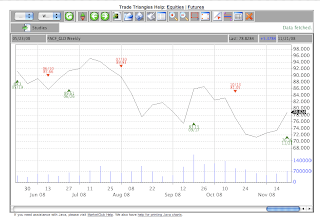 Above is a chart of GLD (Gold ETF) which triggered a Buy last week on the Weekly chart. I have just recently been following this Triangle chart because is appears to be doing a pretty good job of tracking the ups and downs in the price of Gold. Both GLD and SLV (Silver ETF) are tradables that can enter into huge price trends, both up and down, and like the USO chart above, represent other lucrative ways to trade a commodity, thus diversifying out of a trading portfolio of only stocks. 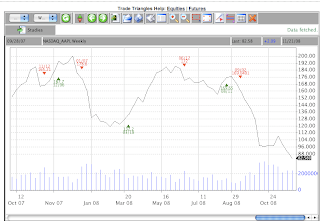 I wrote last week that Friday and Monday should give us a clue as to whether a bottom was in. Despite the rally late Friday, the picture is far from clear. Now with Thanksgiving pending, it may not clear up until after the holiday. But as they say in the dance hall, lets dance with the one we came with. Since early September, all ambiguities in the market have resolved themselves to the downside. Until this pattern changes, I am favoring lower prices across the board and, believe it or not, maybe much, much lower prices. The primary trend of the market is DOWN and it is going to take more then a few hours (or even days) of robust buying to present a tradable bottom. When we go LONG we want to be buyers for weeks or months, not hours and days. We are not there yet.

I tried to make a comment again but there's nothing in the verification space to allow me to verify. Any idea why I can't get a verification code? Maybe ask if other people had this problem and solved it, e.g., post this email for me and maybe someone will help...?

Browser incompatibility problem. If you're using Firefox you won't see verification code (may also depend on what addons you installed with Firefox.) Try IE or some other browsers. IE worked for me.

Hi Allan and Anon, Thank you for the help. I opened firefox and have the verification box using firefox, except the difference is that it looks active here. Using IE, there's the box, but nothing in it to verify. So we'll see if this works.

That last comment needs approval, so I'm going to try with the google info. instead.

Ilene, I see you made it, welcome. When I click on your name I get taken to "Phils Back-Up Site." Why don't you explain what that is all about in case anyone wants to access it.

While I'm doing "crass" self-promotion as you put it, here's my other website, for Washington state (law practice): http://oglebayandbassler.com/

Would I be out of line in complimenting you on yet another superb and educational post?

What part does Astrology and planetary movements play in your decision making?

The two biggest proponents of this are the GREAT Gregory Meadors and Norm Winski. Do they consult with you?

Ahh, a voice is heard from the Prodigy "Hypotheticals" board, the forerunner of all Internet stock forums, circa 20 years ago, dial-up services, desktop computers and astro-traders, selling their wares with false bravado tales of imaginary trading prowess. Those were the days, eh?

Kat, whenever I have a choice between more or less complicated, I always try less complicated first. That is how I use Triangles for trends, weeklies or dailies, but not both. I am not sure that is the best way to trade them, but I am sure it is the simplest. So far, so good.

Allan, my learning curve just got cut into half with that golden nugget! Was struggling with the weekly/daily timing thing all weekend.