This linked article from OilPrice.com paints a very scary picture of financial fallout from the oil volcano and the imminent demise of BP.  But with crisis comes opportunity and according to this author, that opportunity is identified in the bottom excerpted paragraph below. 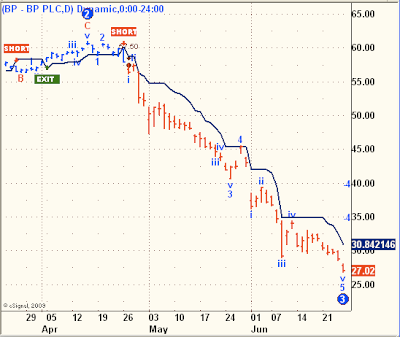 "The BP crisis in the Gulf of Mexico has rightfully been analyzed (mostly) from the ecological perspective. People's lives and livelihoods are in grave danger. But that focus has equally masked something very serious from a financial perspective, in my opinion, that could lead to an acceleration of the crisis brought about by the Lehman implosion.

"People are seriously underestimating how much liquidity in the global financial world is dependent on a solvent BP. BP extends credit - through trading and finance. They extend the amounts, quality and duration of credit a bank could only dream of. The Gold community should think about the financial muscle behind a company with 100+ years of proven oil and gas reserves. Think about that in comparison with what a bank, with few tangible assets, (truly, not allegedly) possesses (no wonder they all started trading for a living!). Then think about what happens if BP goes under. This is no bank. With proven reserves and wells in the ground, equity in fields all over the planet, in terms of credit quality and credit provision - nothing can match an oil major. God only knows how many assets around the planet are dependent on credit and finance extended from BP. It is likely to dwarf any banking entity in multiples.

"If BP does go bust (regardless of whether it is deserved), and even if it is just badly wounded and the US entity is allowed to fail, the long-term OTC derivatives in the oil, refined products and natural gas markets that get nullified could be catastrophic.

"The market, intellectually lazy and slow to realization, as it often is, probably has not woken up to it yet - but the BP crisis could unleash damage similar to the banking crisis. A BP failure through bankruptcy could make Lehman look small in comparison, and shake the financial house of cards we live in even more severely. If the implicit danger of the possibilities embedded in such an event doesn't make an individual now turn towards gold at full speed, it is likely that nothing will." 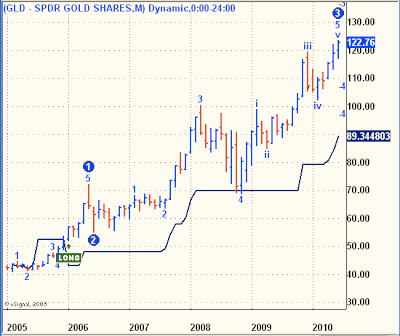 GLD Monthly Trend Model
Posted by A at 9:38 AM

trouble is, the government has been waging a steady and successful campaign to suppress the price of gold and silver since who knows when.
They continue to do it .
You can buy gold and mining stocks now at the top ,and take your chances.

I would wait a while before buying now.

Lucky folks who bought at the february bottom are doing ok right now.

Look first before jumping in...

This article is terrible. Its too sensational. I have studied petroleum eng. and BP is a minor player compared to the giant national oil companies. If BP fails, it would be terrible for BP/Britain/people in the company. But thats it...

Bernhard, you might know oil, but it sounds like you don't understand the financial repercussions. It ain't just them British investors who will get burned:

They lost 33% due to the realestate/housing crisis in the US.

Not sure if you will get this, but others feel the same way as you. Check out these videos, Pzy5t0@yahoo.com