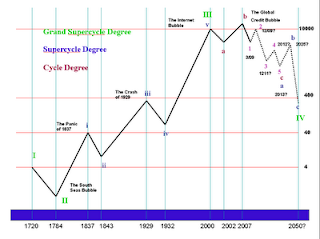 I'm not sure who "Punisher" is, but his explanation of where the markets are right now is pretty much the prevailing view of Robert Prechter and other mainstream Elliott Wavesters.

On the above chart and according to this view, the markets are completing Wave 2 Up before a Wave 3 Down in what is a multi-year bear market, with Wave 3 ending sometime in the 2011-2012 time frame.

"EW is based on the price action of the market being fractals that build upon each other. 5 waves in the direction of the trend, 3 waves against the trend, and then again, until you have done that 3x. You now have an even larger 5 wave pattern and so you get an even larger 3 wave pattern against the trend. Do that 3 more times, etc. etc. These patterns build on each and form 'degrees of trend'. The larger degrees of trend are:

"The last grand supercycle correction that we had was the south seas bubble in 1720. It lasted some 60+ years. According to Prechter, we have finished our last grandsupercycle and have started another correction that could last 40+ years. Certainly there would be many bull rallies or even bull markets within that time period. However, prices would continue down over the long haul. The last two supercycle corrections were the Land Panic of 1830's and the Great Depression. So that should put things in context. Prechter's long term target for the Dow is 400 at the end of it all. This next leg down should be deeper and longer in % of terms then the first primary degree wave down we had that ended in March. So we should look for a 60-75% hair cut to the indices once this primary wave 2 finishes (which it may have already, but we won't know for sure until price confirms it). I hope that helps."

Oh brother, give it a rest already.