What more do we need to know?

I wasn't going to blog today, just take a day off and re-charge the batteries so that I can keep this blog fresh, original and engaging. But Glenn Neely posted a new Question of the Week which inspired me to have this one on one with you guys:


Question Of The Week:

The market has moved higher since you called for a top. Is that a failure of wave theory or did you make a mistake or misjudgement?

You can click on the link above to read Glenn's answer.

As for me, I posted The Bullish Case yesterday and already the questions are coming if I am turning Bullish. My outstanding forecast since March has been that after a brief relief rally, the market will turn down and make new lows. It's been five months, going on six and nothing I have seen has changed that forecast.

What does "brief relief rally" mean?

The market declined for 18 months, a relief rally that consumes 1/3 of that time as this one has can arguably be considered as longer then "brief." Or maybe a rally that retraces only 1/3 of the down move can be considered "brief." It doesn't matter. I could be wrong about the brevity of the rally, without being wrong on the big picture analysis. That seems to be what is going on here.

As for yesterday's "Bullish Case," yes, I could be wrong about the whole damn thing. That scenario outlined yesterday may be why. But as I sit here five days shy of the end of August, my forecast stands.

As Glenn points out in his answer, not every twist and turn of the market is foreseeable. Some patterns are clearer then others. Some stages of advances and/or declines are easier to predict then others. Almost one year ago, I posted Crash Warning which is why many of you readers have found your way to this blog. At the time, I thought a market crash was imminent. That consisted of forecasting a crash and timing it, the "imminent" part.

In the meantime, this whole house of cards can come crumbling down without my posting either of the above-named blogs. That's why so many of my charts are designed to identify tradable trends. Like the one I will leave you with below.

Note the TREND. Note where the TREND REVERSES.
Note what you will do if one......then the other.

What more do we need to know? 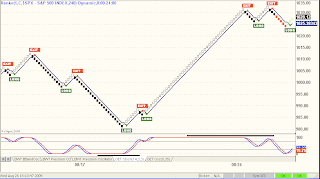 Allan,
Really appreciate the information you so unselfishly supply to all of us.

I have a question regarding your Renko charts. I have been unable to duplicate them using Stockcharts.com.

For example- today's chart using stockcharts.com does not show the zig zag on upper right that your chart shows. Mine is much smoother.

settings- Renko-1 month time- Point set to 1 (and tried below one) Full Stoch set to 14,3 and 3 and it too is steady at the 100 mark unike yours that is starting to rise.

Today's Renko chart is an intraday 240 minute chart. In addition, I've overlaid the ATR study, neither of which is available on Stockcharts. Make-do with whatever you have available, there are many ways to identify trends and reversals.

Nice move on CVM today. Info regarding new lab and some H1N1 attention.

S-I-C-K chart! Covers a couple of weeks. Let's see...trading 10 ES with buy/sell based on this chart would net...wait, I think I am going to be sick!

It looks to me that to duplicate this chart one needs to start with eSignal...

This brings me to the point. I follow several other free online EW sites. They are all good, but yours is the only one that even attempts to educate by showing possible trading methodologies. Again, a thousand thanks on behalf of all those who are savvy enough to clue into the real gold on your site, which lies way beyond mere market prediction. It is sad that the nay-sayers cannot see beyond your market calls (which are more right than wrong anyway).

Nice move on NNVC today. I wish I had bought a bunch more when it was hovering around .60 cents a couple of months ago. That said, I hope we never see that mark again.

If you're interested in checking out another small company that has an amazing product, check out Eco-Safe Systems USA. ESFS. They use ozone to purify water. Ozone is extremely effective at killing all kinds of food borne pathogens including E. Coli and Salmonella. It is the prefect technology to combat N1H1 too. I've called the company, spoken to the President, and I believe there's a solid chance that future orders from a large restaurant chain and/or restaurant could send the stock up overnight.

NOTE: this is not some stupid pumpers post. This is the first time I've ever shared this company with anybody (other than my family). I wanted to gather up as many shares as I could afford before anybody else found out about it. Every time it dips, I buy more. If my fiance only new I've invested half of my retirement savings in this her head would explode...

Thank you Allan. Of all the bloggers I know you are the best at admitting that which has been blatantly obvious for a long time:

Your predictions were wrong;

The Bull is Back;

Steve in LA, I hope you've got a long way to go before retirement.
Having 1/2 of your retirement plan in ESFS is insane, unless you're about 22 years old.

Hopefully, NNVC, another crapshoot, will bail you out!

Interesting company, may be worth investigating:

Thanks for acknowledging that ESFS may be worth investigating. If you ever find the time to look into it further I'd be very interested to know what type of conclusion someone with your extensive investing experience comes to. Good...or bad...