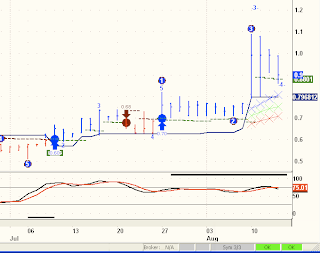 Where in the chart posted do you see an indication of the projection ($1.85)?

The last spike around May went straight up and then came straight down with diminishing volume (interest).

I like NNVC myself, but feel this decline will happen again now. Anyone who bought may have to endure a loss until interest and buying is again drawn into NNVC.

It's in the upper right corner of the chart but its not visible on the screen shot, take my word for it, it's there.

after announcing such results (anti herpes on Monday) that should be followed by another ones sometimes in the future, a man that is selling the share at the moment must be completely an idiot - unless trying to manipulate the price...

It sure is perplexing that NNVC's science as evidenced by these myriad of preclinical trials like this last one at Thevac is not receiving a stronger vote of confidence...aka a higher PPS. I'm very long the stock, but just don't get the PPS.

I have a core NNVC holding that I will not sell, but I am all-too familiar with the spike and dump routine NNVC normally follows after good news. What price break would invalidate the $1.85 target?

I think to understand you need to go into his theory behind the projections. Go study his site. Elliot wave theory I believe?

So Far... I see a symmetrical ascending triangle occuring (if i have the terminology right?)...

Judging from those, just draw a couple of supporting lines and who knows you might have the correct threshold prices which govern whether it'll drop back to 72-78ct...

But honestly, don't see the point. The previous peaks were emotional in value (news of possible solutions, no fundaments? besides proof of concept (patents/reproducability/), now that the company is converging towards strong fundamental arguments. You're most likely to see a rise in the base-price...