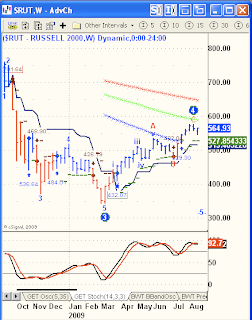 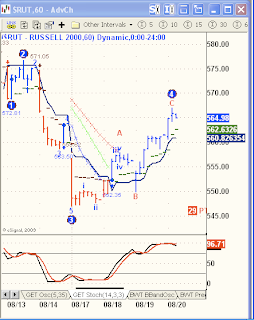 Nice charts BUT can you explain the weekly russell. Is it targeting higher highs here?

oh oh... took me awhile to pick up the parent/child fractal.

Both charts are terminating w4, meaning big w5 down, but one chart is hourly the other is weekly. thus the parent/child similarity, the fractal.

>Vegas is inspirational, i.e. look what having an edge can create and sustain.

Because you subscribe to EWI forecasts, I know you know about the difference between their wave count and the one that's shown on this weekly chart.

What's your sense of it, which one do you favor and why? If EWI is correct, the next move down will be a doozy. If these charts are correct, the next wave down may make new lows but only marginally. Sometimes 5th waves fail, so we might not even see a new low.

I'm curious about which one you favor and why (or maybe neither one, you'll just ride the wave down until it doesn't go down anymore...)

pimaCanyon: The major difference between the two counts for me is practical versus theoretical. The Wave 5 set-up I have been tracking since March is a mechanical trading system, when Wave 5 down is confirmed a mechanical SELL is triggered. The more mainstream interpretation of a Wave 2 ending and a Wave 3 down imminent is orthodox EW Theory, which one cam argue is tradable, but without a rule-based objective triggering mechanism. In other words, my Wave 5 set-up is a trade, Prechter's Wave 3 set-up is a theoretical explanation as to why my set up will work.

Back on July 16th you posted a tip: becoming a better trader by Jeffery Kennedy of EW, "Spot a pattern you recognize". If the S&P March low was the end of a wave 5 dwn in a primary wave 1 dwn, then a primary wave 2 up would now be in effect. A wave 1 in that primary 2 may have ended on June 11th with an intra day high hitting around 956 followed by a wave 2 ending on July 8th with an intra day low around 869. This recent bullish move has all the characteristics of a wave 3 up of primary 2 and is capable (IMO) in a retracement of 50% or more from the March 2009 low to the October 2007 high. I don't see a major slip on the horizon, just a shallow wave 4 dwn somewhere followed by a solid wave 5 up to complete this primary wave 2. It appears to me a logical, visual assumption.

There is much to your visual assumption and if correct, then the end of Wave 2 up will present the shorting opportunity of a lifetime.