I post a lot of charts and trading ideas, some better then others and through it all we can easily lose sight of the bigger picture.  I shared some Weekly Trend Models with subscribers earlier this weekend and emphasized how important these charts were for the general path ahead.

Here are three Weekly Trend Models all sharing the same pattern, characteristics and implications for the remaining months of 2010: 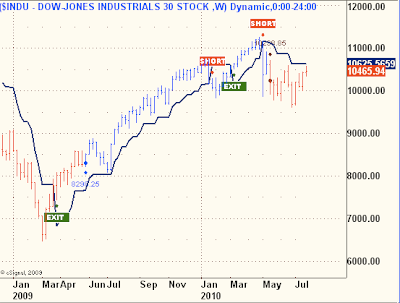 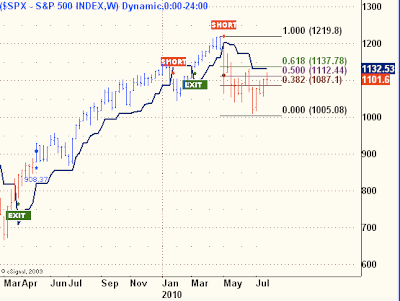 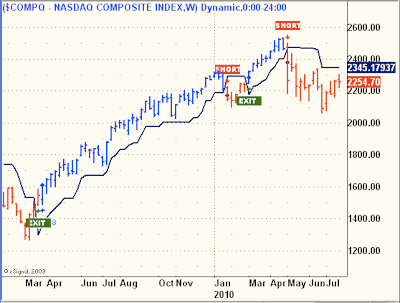 This isn't all that complicated.  The 6% pop in July notwithstanding, these markets topped out earlier this year and completed an initial wave lower.  Over July, that decline has been partially retraced. I put the Fibonacci retracement levels on the middle, SPX chart.  Although the retracement could go higher, it has fulfilled traditional price retracement behavior and the dominant trend, DOWN, can resume at any time.

This fact has not gone unnoticed by the Trend Models, all of which require significant price strength before they can reverse back LONG.  The Daily Trend Models reversed LONG right after the July 4th weekend and remain LONG going into August.  Once the Daily Trend Models reverse SHORT, it's all over.  Of the three models shown above, the NASDAQ is the closest to reversing SHORT on its Daily chart and I expect that it will lead the other two indexes, if and when those reversals occur.

If the unlikely happens and these Weekly Models reverse LONG, then I will too.  Unless and until that happens, the big picture scenario is that of a fledgling downtrend that has taken a summer break and appears ready to resume it's path lower.

should be an interesting ride.

The market will continue on a path UP not down the market direction is now controled by the manipulators. They only have used 43% of the stimulus money so if a big drop appears they will quickly change the course back to up. Thats they way I see, just my opinion.