As the market started it summer decline in earnest, I've had to "Reject" some Comments that essentially called me various iterations of "perma-bear" using four-letter profanity to get across Mel Gibson-like tirades, as though its all my fault; that I'm the cause of the declines in the markets, the oil volcano in the gulf and of the immigration drug wars on the Arizona-Mexico border.  I should really post some of the trash that gets slung my way, but its way to nasty for a family friendly web site.

The point of "9600 or bust" is to illustrate and emphasize the significance of 9600 in the DJIA.  As is usually my preference, I'll let the charts do most of the persuading here, starting with the biggest time frames and working our way down to the intraday.  You should be able to see the progression, especially if when you get to the bottom (hourly) you work yourself back up. 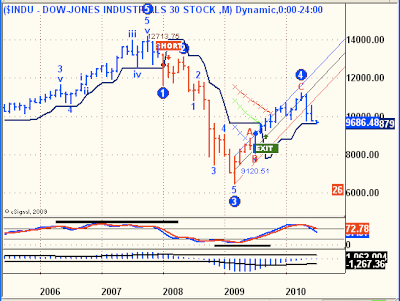 DJIA Monthly
This may be my favorite, because of its big picture importance.  You will recognize the Advanced GET Wave 5 SELL SIGNAL already confirmed with the break of the trend regression channels in May.  The Monthly Trend Model reverses SHORT on a monthly break below 9600.  Ergo the significance of 9600, it either provides support, or kiss this market good-bye.  What are the probabilities?  Read on. 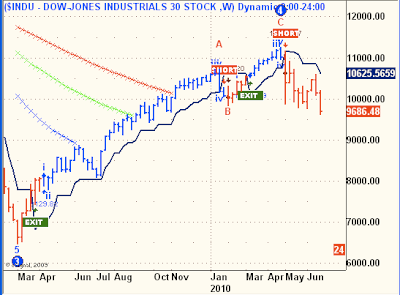 DJIA Weekly
The question of the week here is whether or not this pattern is closer to the beginning of  a long, extended downtrend, or the end of a corrective downtrend?  The break below 10,000 suggests what I think is the correct answer. 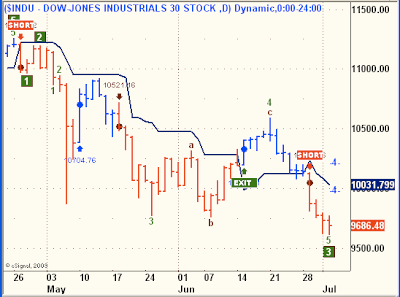 DJIA Daily
Yes, I can count five waves down, but I can also count an ongoing three waves down that is not yet complete.  Again, 9600 looms significant. 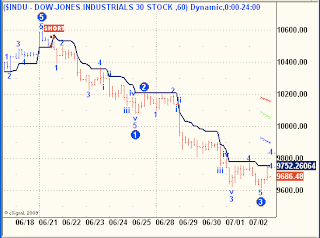 DJIA 60 minute
A beautiful trend line for traders.  Note the double bottom just above 9600.  The software says waves 4 and 5 still to come, but wave 3 has to finish first and the implication is that there is no way 9600 holds in light of more selling due to complete the entire pattern.  That itself has dire implications when applied to the Daily, Weekly and Monthly charts above.
Nothing is set in stone here, but the probabilities suggest that prices are no where near the end of a larger wave count and that suggests a rough and tumble summer ahead for the markets.

This last chart,the 1 hour chart,seems the most clear to me,and I agree,it looks like wave 4 ongoing ,and (sub)wave 5 a bit more down. could be truncated or not. corresponding to the S+P chart one could say the low of the wave 3 at 1010 could suggest the wave 5 bottom hits the 1000 line.
and might trigger a rally correction up from there.

When I was looking at the $gold chart as much as the market pushed gold down hard least week,I see a bit more room down to go. before it hits support.

When you look at indicators showing oversold levels. and a completion of wave 5 coming...doesnt it suggest some kind of rally next up,to some key resistance (s+p) 1080? 1100?
and then failing there, begins the next leg down...

I was looking for market to hold support and continue uptrend last week,
and it failed badly.

Now I'm looking for a rally back to that support ,now become resistance, and Fail there

let me get this straight...

are we on the cusp of the $INDU's monthly trend going south?

as always...thanks for the great work.

I believe Allan's long term call is correct,however if SPX breaks through 1045, in the short term (ie.next week or two) it could go to 1100 before it turns back down.

I am playing the short term uptick (ie. siding with the rising market) for now. It is a traders market.