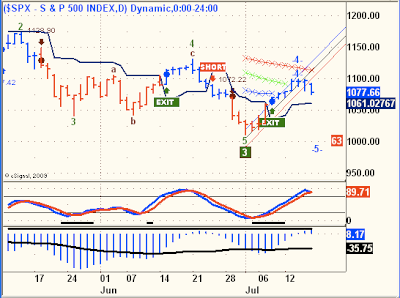 We've seen this work before.  Once prices break through the channels, the mechanical SELL is triggered as it is being confirmed by both the False Bar Stochastic and the Elliott Oscillator.   There is also a lot of confirmatory supporting evidence in the Intraday Trend Models, in particular the 240 minute models which have been navigating this market well over the past few months.

Even though the SPX_Daily Trend model doesn't kick in until 1061 is taken out, there are enough other weight of the evidence considerations to consider the short side now.

no posts for 2 days with all this going on.

is a day like today an except to a strict following of the trends ?? with such a down day so far, if i'm already short my core position, and sold 1/2 of my trading position yestrdy after moderate gain, do you take some profits here expecting improvement into the close or a little rally monday and re-enter for trade ?

comments ? (constructive ones preferably), but a little sarcastic humor is acceptable....and expected.

Almost every trader I track was looking for an UP day.

My own thought is that Ive learned to watch certain patterns become as reliable as anything can be in this tricky game.... basic stuff that gives me a probability for risk/reward that is acceptable.

One of the main patterns I follow is the one that goes
1) Breakout from trendline
2) Dont jump on it...wait for the Pullback
3) If/when the pullback retests to kiss the broken line (kiss of death) or fail at some other key resistance ...
4) Then I look to enter and follow the new trend.
5) to a target point I see ahead of time,and watch for as it plays out.
usually my target is some key support/resistance point ...
6) and i watch the overbought/oversold indicators telling me the trade is getting old.
........................

Allan gives up to date timely signals from his system to the paying subscribers, which addresses the kind of questions you asked. Do you think he should give them away free to folks here?

Do you think that would be fair?

i AM a subscriber, and do pay for it. it was a general question to the others here that trade perhaps other systems as well. also, are huge up or down days traded a little different by some.....that's all. i'm here almost every day, and haven't seen a new post for at least 2 days, so thought i would ask a stupid question....
my second post above was written before there were any responses.

its all good.... thanks for explaining

It might be useful to have a matrix at top of page that lists a few index-ETFs and your current trade-posture, color coded, for each:

Using blue might be preferable to green, because the die Dummköpfe will suppose that green means easy.

Include key price, that which would cause alteration of trade-posture. Including this key, acts as caveat emptor in case you don't get chance to change color in time of market event.

Such mechanization fits philosophically with your automatic trade system. (Perhaps in future you can automatize the matrix.)