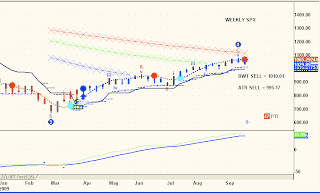 fyi for Market Club fans, today's trigger for a weekly $SPX red triangle is whatever the September 8th low was. My charts only show nearest dollar for that, which was 1019. If we don't breach 1019 then next week's trigger will be today's low.

Today's low already hit 1019.96 and then pulled up some, so the next decent push down should trigger the weekly sell (followers of the daily/weekly system would have gotten out of longs around 1041 and would go short at 1019).

Wayne: thanks for that update on MC Triangles. I meant to throw up a MC chart but got distracted managing my puts this morning; Once that Weekly Sell is generated, it should be an early entry warning for Sells from the other Weekly timing models, BWT and ATR.

Allan - did the trade triangles on Market Club flip to sell for the weekly and monthly? Mike

Allan - did the trade triangles on Market Club flip to sell for the weekly and monthly? Mike

Well, kind of. The SPY flipped short on the weekly, not monthly. They don't have $SPX but rather use $INX, clearly not the same. It did not flip short...but $SPX would have.

The "big one" crash is over.

Now let us come to our senses and go long.

"The "big one" crash is over. Now let us come to our senses and go long."

Psst...Is that you Ben Bernanke? Hey man, you better stop messing around and get that Plunge Protection Team together this weekend. We busted through support this morning and that line has been tested as resistance all day. Looks like it's going to hold. Monday's gonna be a bummer. Don't worry, I'm sure all that stimulus and those good economic numbers will turn things around soon.

Better you than me,

Actually this is Paul Tudor Jones and I am all-in long.

Do you support me or Allan?

I think the choice is obvious.

I dont have access to the 'trade triangles 'market club subscription. I have been using good ole fashion brain power and calculating the elliot waves and fibs myself...I was looking for a wave 5 completion (from the sept 18 high) to complete around 1018 area ...and here.... to happen right on top of the full moon represents the 'reversal time' I was looking for.
so I see... a cycle wave 1 (down) complete here...the reversal is now starting wave 2 back up to test the trend channel that was breached...for the next two weeks (maybe) circa october 20 area +/- two days either side...to see major failure at (S+P 500) 1060 area/1050 area...completing wave 2...and starting the big wave 3 down to target 975-950 area to complete wave 3 down.
I dont expect to see any further downside until a few weeks time and "Failure at 1055" (wave 3 =1055 to 955)
no need to thank me.....

This is just Allan "crying wolf" again to support his own positions. We've heard and seen all these weird chars before and the market has gone straight up.

This is because WE ARE IN A RAGING BULL MARKET folks.

The trend is your friend and Allan at least used to support the book "Trend Following" now he has been anti-trend for the whole run up. Bullish only in NNVC which is ONE penny stock that has gone down.

THE ECONOMY IS FIXED.

THE JOBS ARE FIXED.

THE HOUSING MARKET IS REBOUNDING.

If I were storming a beach, I'd take Doug. Unfortunately, this ain't the USMC and I don't agree we are in a "Raging Bull Market."

The death throes of a powerful economy are equally as powerful. The drops are scary and the rallies are wonderful. So, as the titan that was the U.S. economy thrashes about in its agony, anyone who thinks it's a positive sign can be forgiven for thinking that market conditions, which always heralded a bull market in the past, are once again the portents of a new bull market. My read is that times have cycled. It's not a case of "This time it's different," it's a case of, "Oh crap, grandpa told me about this." We are in a lot of economic trouble.

Yes, we will probably see some repeated bull market activity before a cataclysm of this proportion is played out. So maybe the bulls are right and I am wrong about this one. Hell, I don't know. But I'm pretty sure the short term forecast is down and the long term trend will be a replay of the end of Raiders of the Lost Arc. Beautiful angels turning into something dark and horrible.

Doug, expect to see me by your side cheering on the bulls if you are right, but I will still not be convinced about the long term trend until the debt is deleveraged and the jobs are there to support the economy.