This past weekend I sent out a Biotechnology Basket consisting of eight smaller capitalization biotechnology stocks poised for stunning growth over the coming years.  Of those eight names, three are core positions.  Compugen is one of these core holdings. 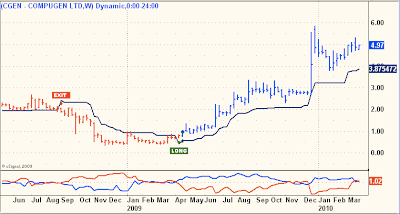 CGEN Weekly Trend Model
"George Gilder and Louis Navellier both have strong buys on this one and after a little R&D this weekend, so do I.  Israeli therapeutic and diagnostic biomarker company, state-of-the-art computer based discovery platforms for analyzing RNA and DNA, the building blocks of life.  Collaborations: Pfizer, Merck, Bayer, Medarex, Roche, Teva, Siemens and others. $140M market cap a fraction of what this company (and stock) will be worth in the years ahead.  You wanted to buy Genentech in 1980. Here is your chance."
---Weekend Update, Sunday March 21, 2010

"Israel's Compugen (CGEN) is an innovative drug discovery company that uses its expertise in computer sciences and molecular biology to predict molecular behavior and discover potential therapies and diagnostic biomarkers. The company then licenses those discoveries, which are focused primarily in the areas of cancer, cardiovascular disease and immune disorders, to other drug firms for further development in return for milestone payments and future royalties. In a nutshell, CGEN's high-tech gear and genius scientists figure out the best potential cures, then someone else does all the work while Compugen shares in the profits! Compugen has formed licensing and collaboration partnerships with some of the biggest names in pharma including Biosite, Medarex, Ortho-Clinical Diagnostics and Roche, proving that it certainly knows its stuff.

"On Tuesday, the company announced the discovery of a potential treatment of autoimmune disorders called CGEN-15001. This has big potential for the company, with the potential for breakthrough profits. The stock is a great buy but is also thinly traded like PVD, so I must insist that you only place a limit order within 25 cents of the previous day's closing price. Again, under no circumstances do I want you to place a market order, since you could inadvertently send the stock soaring and hurt yourself and other investors."

So what is special about Compugen's announcement today?

"Compugen's predictive discovery of the parent protein in a field that has been systematically picked over by pharma giants is in and of itself noteworthy. The subsequent predictive discovery of CGEN-15001, a novel soluble recombinant fusion protein corresponding to the extracellular region of the Compugen discovered parent protein, and the results of the in vivo testing conducted by Professor Stephen Miller of Northwestern University speak for themselves.

"Equally important, however, is to place today's announcement within the context of previous announcements. The initial product candidates emanating from and intended to validate Compugen's discovery platforms do not seek to extend life expectancies by weeks or months and are not mere enhancements of existing medicines. Rather, we are seeing a growing list of new product candidates, tested by leading authorities, some of which hopefully will provide meaningful solutions for widely prevalent conditions for which medicines are lacking, e.g., pulmonary fibrosis, IBD, retinopathy, epithelial tumors and MS.

"In addition, examine today's announcement together with earlier announcements, and you cannot help but notice the broad applicability of Compugen's science. Compugen's understanding of biological phenomena on the molecular level has implications extending far beyond any single disease or disease category.

"How often can you enter into a conversation with a group of people and take enormous satisfaction in being able to acknowledge your own ignorance? This is what routinely happens to me when I visit Compugen, and I couldn’t be more pleased. If there is to be a new industrial revolution, i.e. a revolution in the pharma industry, involving a shift away from trial and error to predictive discovery, it will require a combination of creativity and brain power beyond my meager means, but which I am privileged to witness and admire at Compugen."

If you are brave (!) and want to understand the full implications of Compugen’s cell penetrating peptide (CPP) discovery platform announcement, read: “Cell-penetrating peptides and their therapeutic applications” by Victoria Sebbage.

“CPPs have demonstrated themselves to be capable of delivering biologically active cargo to the cell interior and the vehicular capabilities of CPPs have already been harnessed for use as laboratory tools. However, it is believed that their true potential lies within the field of therapeutics. Attached to a CPP, therapeutic cargo could be delivered to an intracellular target, thus overcoming the entry restrictions set by the plasma membrane. Since the discovery of Tat, the number of known peptides with cell-penetrating capabilities has grown and in 2003, the first CPP-based drug reached phase II clinical trials.”

"A likely scenario: Company X comes to Compugen and says “we have a biologically proven therapeutic, but we can’t get past the cell membrane, can you help?” This is one of the reasons the CPP discovery platform, IMO, is a unique and important part of Compugen’s “discovery-on-demand” offerings."

I could have stopped at the Weekly chart and would have made a persuasive case for being LONG this stock and company.  But the underlying story here is immense in implications for the future of diagnostic and therapeutic medicine.  I've included the above links in an attempt to tell CGEN's story, or at a minimum, provide some starting points whereby you can familiarize yourself with the science and opportunity here.   The stock is up about 3% from Monday's open, which is inconsequential in relation to the potential gains over the next few years.

Intracellular therapy .the wave of the future.
DNA,RNA,Intra cellular penetration. breaking through barriers.
revolutionary.curative not palliative.

Thanks for sharing with us non-subscribers, Allan.

Surely this can't be the same Anat Cohen of CGEN jammin with John Pizzarelli?

these biotechs have such great stories it makes a trader fall in love with them. Only problem is if general stockmarket collapses. These biotechs are heavily dependent upon rosy sentiment in order to raise capital for their capital intensive operations.

Why is a person of such impeccable taste in music still a non-subscriber? :-)

I'm as sceptical as they come, but I've found few services as useful and potential rewarding as Allan's.

He's not only successful(a rarity), but always hungry for innovation. That makes him a huge bargain.

As friend, I suggest you give this Anti-cramer a try.

This past weekend I sent out a Biotechnology Basket consisting of eight smaller capitalization biotechnology stocks poised for stunning growth over the coming years.

Basket is restricted for only subscribers?

The idea is to give subscribers their money's worth, however I can do it. There are multiple benefits to being on a private email list, including but not limited to an alert I just sent out on one particular ETF that just generated an intriguing Buy Signal on the 240 minute trend model chart. A precursor to the Daily trend model flipping LONG? If so, it's red flag for the markets in general.

No, TZA is down today and there is no way a trend following model can trigger long when the underlying symbol is going down.

I am a subscriber to your service and appreciate what you do very much. Just owning NNVC and GNVC alone have helped me very much.

I have a trading question for you that I'd like to get your feedback on. What is the most effective way to contact you?

You can always hit "Reply" to one of the emails, or use the following address:

Off Topic and from another Blog:

Tim Mack said...
JPM has a size resting order at 65.00 in the bigs that has been keeping a lid on it so far. Over the last few days they have sold over 2,000 cars at or near that figure. Today they showed 500 cars there. Locals have run from it so far.


can somebody flush out that comment. Has a lot of lingo many are unfamiliar with. And I have difficulty correlating 65.00 with the SP500??? or what?

I follow Allans blog ,and also subscribe to patrick cox's biotech newsletter. Between the two, Ive gotten a good education about the biotech sector.
Probably the most compelling realization is that ...Right NOW....2010

the world of medical technology,disease cure,is shifting into HIGH gear.

ISCO is one such company. and their recent breakthrough is about macular degeneration.
AVXL is about alzheimers.

I'm not sure what Allan's biotech basket holds,so I dont want to give away too much here for non subscribers. these ones I mentioned are my own finds.

Anyway, the point I'm making is for folks not to get lost among the miriad of stocks out there....but to understand the big picture of biotech breakthrough in medicine.... it is like the dawn of a new age....literally, the sun is rising in disease Cure.
and these stocks, when you identify the right ones.....are the chariots that will blast off into great wealth. only could be curtailed a bit if they get bought out early by big players. so you make a small fortune on one instead of a big fortune.
some companies may decide to remain unbought.

He is saying that JPM was willing to sell 500 large future contracts at 1165 and 2000 were previously sold over the last few days around that price. It seemed like 1160 might be the upside resistence with buyer evaporation but later it was taken-out as the market moved up after the comment was posted.

{Your small} Brother is making
His balloon squeak like a cat.
Seeming to see
A funny pink world he might eat on the other side of it,
He bites,

Then sits
Back, fat jug
Contemplating a world clear as water.
A red
Shred in his little fist.