This is the kind of biotech that presents a compelling opportunity:

(2) Product addresses market where there is no other functional treatments: Spinal Cord Injuries (SCI);


"Currently, there are no treatment options for SCI patients to successfully restore function following a spinal cord injury. Existing treatments consist of a collection of approaches that only focus on symptoms of SCI, such as decompression and mechanical stabilization of the spinal cord, rather than on the underlying pathology."

(3) Product has been tested on animals and it works:


"InVivo has demonstrated the proof of concept for its SCI therapy in primate and rodent animal models. The company is the first in history to successfully demonstrate functional improvement in a paralyzed non-human primate and believes this model is the best surrogate for how the products will work in humans."


"The financial impact of spinal cord injury (SCI) is staggering, estimated to be between $244,000 and $829,000 in the first year alone and over a lifetime this could add up to between $1- $4 million. The annual global market for SCI is estimated at $10 billion. There are currently no successful treatment options for SCI patients"

"Mr. Reynolds is a co-inventor on four of InVivo’s patents and he is co-author and winner of the “2011 David F. Apple Award” given by the American Spinal Injury Association to the top published paper in the world for SCI research. He is the former Director of Global Business Development at Siemens Corporation where he had global responsibility for business development."

"Robert S. Langer is the David H. Koch Institute Professor at the Massachusetts Institute of Technology (MIT) (being an Institute Professor is the highest honor that can be awarded to a faculty member). Dr. Langer has written over 1,100 articles. He also has approximately 760 issued and pending patents worldwide. Dr. Langer’s patents have been licensed or sublicensed to over 220 pharmaceutical, chemical, biotechnology and medical device companies.


"Starting with our DCF model, we’ve increased sales by 20% to account for “overwhelming” promotion of a massive sales force like J&J (JNJ) or Medtronic (MDT). We’ve also removed future dilution and lowered the discount rate to account for a much lower cost of capital. Finally, we’ve reduce the S&GA expense figuring that a larger company will use representatives already in the field promoting products for spinal surgery, biomaterials, tissue engineering, or neurology. We arrive at a “take-out” value of $525 million, or $7.25 per share. We believe this is a price that a company like J&J or Medtronic could easily pay and still see accretion." 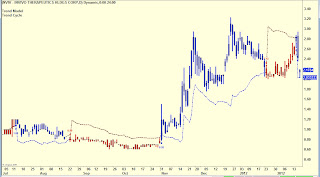