DETROIT -- The Detroit Red Wings have done something that no other NHL team had done before.

By defeating the Dallas Stars 3-1 on Tuesday night at Joe Louis Arena, they became the first team in League history to win 21 straight games on home ice – and by the looks of things, they might keep winning here for a while.


So reads the lead story tonight from nhl.com.

I watched the game in its entirety, wearing my official NHL Pavel Datsyuk jersey. I toasted my boys with a beer and talked to them throughout the game through my Sony HD television. I smiled and cheered and paced. I warned them against taking stupid penalties and urged them to clear the puck, go to the net, get back on defense and shoot, shoot, shoot.

At the end of the game, Bud Lynch, the 90-something announcer for the Red Wings, a man I used to stay up at night and listen to call the play-by-play as far back as 1960 (maybe even the late 50's, I can't remember), called out the names of tonight three stars: 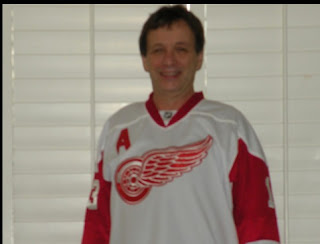