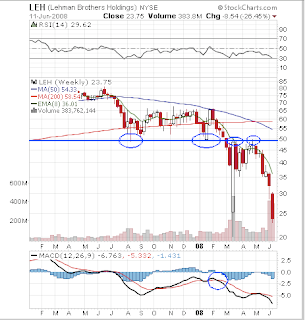 LEH is in the news today, so I brought up a chart to see how and why I missed this one. Well, I missed it only because I wasn't looking. Note how the 50 level on the weekly chart served as support throughout the last six months of 2007 before being breached in early 2008. At that point, the 50 level became resistance. LEH hit 50 and reversed down hard two times before collapsing. Finally, note how the entire decline was confirmed by the MACD.

Hi Allan,how useful do you find MACD? I could never find anything there to help my trading.
Thanks,Ron

Ron, it seems as though the learning curve in technical analysis, which includes all aspects of charts and indicators, is as long as one's participation in the markets. This past year I have learned three skills that have greatly improved my ability to apply TA to trading. First, using weekly charts for intermediate turning points, including support/resistance analysis.

Second, while on the weekly chart, to use the weekly MACD for much cleaner signals, eliminating much of the noise found on the daily chart.

Finally, I use candlesticks on those weekly charts to aid in nailing those major turns.

None of these is an island onto itself, but when used in concert, I have found that they generate a very useful big picture trading map for individual stocks and indices.

Ahh I had LEH short from 3 days ago when my velocity indicator went negative. I am interviewing next week in NYC at a fund to be unnamed. Will let you know how it goes.