Last week we looked at GTE, a stock that Louis Navellier pumped with a promise it would double in 14 days. GTE was up as much as 20% from Monday's open, before collapsing at the end of last week, closing just about 1% higher for the week.

Louis is at it again, with this week's teaser e-mail:

There’s a fuel conversion revolution at hand, and there’s simply no stopping it.

The biggest profit taker of all will be a little known fuel conversion company that converts American gas guzzlers into clean burning compressed natural gas (CNG) vehicles—in the time it takes to service your car.

Please add it to your holdings today.

Your Timing Is Perfect

Louis Navellier here and a tidal wave of money is about to pour into this little known fuel conversion company, and in doing so hand you the fastest profits of your investing life.

The reasons are obvious:

2. State and government tax credits will cover nearly the entire cost of converting gasoline fueled vehicles to compressed natural gas so there’s (a) virtually no out-of-pocket cost on the consumers end and (b) the fuel savings are virtually instantaneous.

3. As a result, you can fill up your new natural gas powered for as little as 63 cent-a-gallon with next to no payback time on the conversion. So instead of paying a wallet-busting $80 a tank of gas you’re looking at just $12.50 for 20 gallons of natural gas.

This is just the beginning of what makes this fuel system company such a great play.

…as Volkswagen is set to exhibit a prototype of it’s Caddy EcoFuel in September that can operate on both compressed natural gas and bio methane.

5. The CNG conversion craze has already started around the world, with 4,500 gas to CNG versions being done every month in India as we speak—not to mention, Turkey, Malaysia, and Indonesia.

6. What’s more, there’s already a natural gas fueling network in place around United States, so you could drive from San Francisco to New York without any problem finding a place to fill up.

7. In addition, because natural gas is not only a cleaner burning fuel (which is why the government offers tax credits in the first place) your engine burns cleaner and runs longer as well.

When you consider that…

* Most alternative fuels sources are still on the drawing boards,

* The natural gas exploration, production, refining, and distribution infrastructure is already in place and

* The government’s tax credit for converting your vehicle makes the cost virtually free. You can see why you’re looking at a ground floor opportunity in the making.

Buy this one stock today and I guarantee you’ll thank me a thousand times on July 7th —or you won’t pay a dime.

The company he is talking about is Fuel Systems Solutions; FSYS. 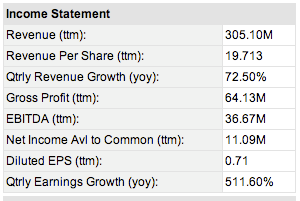 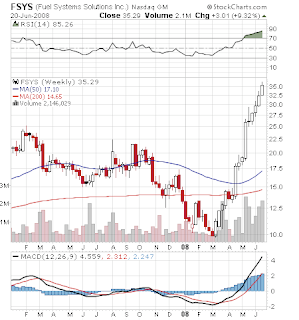 An Alternative to America’s Gasoline Crisis

Excerpt from article from Seeking Alpha on CNG conversions:

"Of 181 million US registered cars, trucks, and buses, only 0.017% or 30,000 vehicles are fueled with CNG. To convert an existing gasoline fuelled vehicle to CNG, it takes only a few hours. The cost of a conversion kit and tank is about $3,500. The state of Utah offers a tax credit of $3,000 per new or used vehicle converted to CNG. Questar (STR) not only supplies CNG but it is provides storage and dispensing facilities at existing service centres in Utah and Wyoming. Every state in the US provides an internet listing of CNG dispensing locations. Environmentally, when compared to gasoline vehicles, CNG vehicles reduce:

Thanks for your help in figuring out what Louis is talking about. It seems you have a little experience following Louis, do you feel he provides a reputable service or does he just blow a lot of smoke? I have notice he advertising how great he is, but I have followed some of his advice and have had mixed results. Overall, his advice would receive a passing grade from me, but I do beleive he should advertise some of his loser, next to his winners, to show how things average out. Would Louis receive a passing grade from you?

You may have to read that a few times for it to sink in.