"Confirmatory Analysis" is a stock selection methodology that combines strong technicals with stellar fundamentals. In my case, technicals always come first and will often suffice in and of itself for a reason to buy or sell a stock. When fundamentals kick in, the trade becomes compelling. Since there are usually more technical-based trades then capital to trade them all, requiring the kicker of fundamental confirmation serves as a filter to reduce the array of attractive set-ups to a manageable level.

I bought GSI on Friday near the close, even though the general market looks sick and we are headed into a holiday week. But the trade became compelling around mid-session when I pulled up the GSI chart and realized that it was about to break out of a six month pattern: 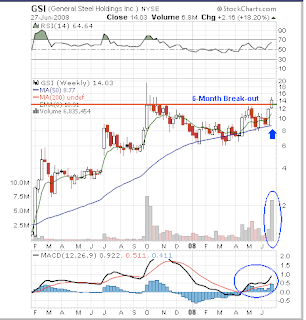 The annotations on this chart give a clue as to why I like GSI here;

Now the truth is that I bought GSI just on the break out. I didn't have time to check out the fundamentals on the stock at the time, but, GSI has been a stock I have been day trading for months, because when it runs it really runs and it has been easy to scalp 5% under the right trading conditions.

The fundamentals that I usually look for in a stock will vary with each individual security and sector. I've highlighted a few in prior blogs that have shown to be good indications of future price movement. I especially like Revenue Growth and Earnings Growth and those are easily available on Yahoo Finance.

But by now you should know that I absolutely love a good story stock. A good story will get under the skin of a trader/investor and completely take over those areas of our brains that control rationality and allowing total domination by and for the area of our brains that control greed and yes, dreams. It may sound risky, but, remember the late 1990's when this chemical or biological process became epidemic, causing fortunes to be made (and then lost, but that story is for another blog).

GSI is a Chinese stock and that is itself a story. It is also a Louis Navellier stock and in order to be a Navellier stock it by definition must have stellar fundamentals as well as a compelling story (as only Louis can tell it) behind it. Now we've made good money on the last two Navellier stocks, GTE + 12% in two weeks and FSYS +4% in one week.

Here is Louis' "Portfolio Grader" for these three stocks:

As you can see, according to the way Louis Navellier looks at fundamentals, GSI (as well as GTE and FSYS) is very highly rated. But wait, there is more.

Nobody writes a story better then the copywriters who work at Navellier's publisher. So I will end this rather lengthy blog with their hook, the story behind GSI and why if you don't own it yet, not to worry, you haven't missed out because as you will read, the best is yet to come.

I'm Louis Navellier and I'm writing to you today to tell you: you
haven't missed it yet, but if you're going to buy this monster
winner, buy it in the next 72 hours.

On January 2, Emerging Growth subscribers, acting upon my
instructions, sent privately via email, loaded up the best
example of this new type of China stock.

Today, with the stock near $14, we are closing in our FIRST
double.
The first, I believe, of several.
============
What It Does
============
China produces one-third of the world's steel, but domestic
demand is even greater. That's why steel prices are going higher
and higher. Indeed, even though raw material prices (coal,
transportation) are up now, steel prices are up even more,
allowing our company to expand its margins.

This producer has three other big advantages:

- because it's not owned by Beijing like the other China steel
behemoths, it can price nimbly and change its mix of output in
real time.
- it owns ore mines, so it controls raw material costs. The ore
mines Rio Tinto and BHP Billiton are gouging China's state-owned
steel producers, but this company is largely immune.
- it is gobbling up other small steel producers who are struggling
with increased costs, thereby making itself more efficient every
quarter.
- it serves a niche: hot-rolled sheet steel used in agricultural
equipment, shipping containers and big construction projects like
Olympics stadiums. It is closely involved in the rebuilding of
Sechuan after the recent earthquake. In every niche, it controls
up to 70% of the market share.
========
Why Now?
========
If my information is correct, we have 72 hours to act. Here is
why:

One of the world's richest men wants to buy our little
independent China steel company.
In the last year, Lakshmi Mittal has built steel mills in Saudi
Arabia and Poland, created Mexico's largest steel conglomerate,
wrung mining concessions out of Senegal and bought a distribution
network in Germany. Turkey, Mozambique, Italy and Estonia have
also been sucked into the Arcelor Mittal mill.
Just in the last year.
But the jewel in Mittal's global crown is China. And his prime
target is a small, well-run, independent steel mill-of which ours
is the best.
The trigger for an offer comes as the second quarter ends. That's
when market share is declared and speculation about consolidation
will run wild.
Many will buy on the rumor (as the saying goes) forcing our stock
up 20%, 30% or more during the July 4 weekend.

Get in BEFORE this happens.

Yet another superlative pick.I too tend to take your picks
when the technicals and fundamentals are not only both GOOD but in full alignmemt.

Which they are here. I guess now you know my AllAllan trading secret (at least one of them).

Leonidas, good to see you again. Your approach to AllAllan mirrors my own, or at least what mine would be if I wasn't me. I've been posting a lot of ideas lately, most of which have worked. But the reasons for each trading idea differ and that allows anyone to pick and chose among the opportunities, taking whichever ideas appeal to that individual. As for me, I take them all, as they all seem brilliant at the time.

allan,GSI chart looks good, do you have any exit strategy before you pick the stock?? thanks

revengetrader, on any breakout the stock should continue running, the trade positive from the start. any thing else is suspect.

Good one Alan, I also like the FA/TA combos. I'm glad you unraveled Navellier's clues on this one.

Hopefully I can get in with a smaller purchase before it runs away. Leonidas' 35K share purchase (~5% of the 10-day avg volume) should help start Monday's upward move :) But even if it falls back below the trendline, I'll probably hold on and see if the Mittal story plays out. Seems like a safe hold, given the rising steel prices.

Allan's blog is the best source of information I have found to date regarding what stocks to invest in. I don't know what motivates his sharing of his skills and knowledge with us, but for whatever reason he does it I am very grateful. I wonder if there is anything we could do for him?

Alan, why don't you put one of those "Donate" buttons on your site, that way we can share some of our profits from these picks with you?

I still have NNVC (and a lot of it) from about 20 cents. I can't believe what some blogs charge for their garbage. Probably the best thing I've learned here about trading is that it can be done, it's not just a stupid dream. Thanks Alan!

Allan,this was a great post.Although not a holy grail,I think combining technicals,fundamentals and money management rules might be the best way to trade/invest.
I know you prefer to buy the breakout,but do you ever purchase on a pullback to a support level?
Thanks,Ron

do you ever purchase on a pullback to a support level?

Yes, but not nearly as reliable as my break-out trades; one advantage though is that drawbacks to support usually will have a tight stop. Along those lines, a double bottom also allows for trade with a tight stop....in both cases, risk:reward is usually very favorable.

thank you. accolades for this one and many others.

brilliant ideas, most of which work, and humorous posts.

Last time Leo pickedup 35000 shares...I think he doubled on NTRZ...plus he got out at about the right time on that one. Let us know when you sell Leo!

Here's my take on the near-term price catalysts:

* steel prices news: Prices are still going up and there's no cooling off in the near-term, that I've heard of. I think news will periodically give GSI more upward trading momentum.

* Based on the timing of their previous Edgar filings, it looks like Navellier's near-term catalyst for a theoretical Mittal buy-out of GSI (2Q market share declaration) won't occur until ~ 6 weeks from now, i.e. mid-August, when they filed their last 2Q report.

I probably shoulda sold when it crossed 16 (shame on me for not setting a price target). My plan now is to daytrade the ups/downs if and when the opportunities present themselves, then at some point to hold for the Mittal story to play out.

"on any breakout the stock should continue running, the trade positive from the start. any thing else is suspect."

How suspect is today's action?

It would be extremely suspect if it weren't for the holiday week, even with the holiday, it is very suspect. There were good profits in this play, but they were fleeting, another reason I like very short term trading over position trading.

how are Leo's 35K shares holding up....hopefully he sold early.

anything suspect about FSYS and GSI being down over 15% today....both picks came from the same source correct?