It's no great surprise that I embrace charts as my primary trading tool. Many of the trades that I publish here are displayed on charts created at StockCharts.com. But that is usually not where they are discovered.

For my nightly stock scans, which is the beginning of my systematic analysis and creation of trade ideas, I use Market Club. What I like about their scan is that it is tuned for breakouts, utilizing various time horizons, i.e. daily, weekly, monthly or quarterly as well as their own proprietary trade identification methodology. Unlike a lot of market scans, with MC I get a list of stocks that have already been filtered based on my own criteria, so instead of unmanageable lists of hundreds of stocks, I end up with about a dozen choices already prequalified per my very selective taste in trades.

I use my eyeballs for the next step, picking out the best charts, or at least the most opportunistic looking charts, for further refinement. Often I will then utilize StockCharts.com to put on my channels and assorted other indicators which add perspective and an easily printable and electronically transferable image, many of which make their way to this site.

If even this is too much work, Market Club does have their own embedded mechanical breakout trading system, something to do with Triangles. Without their permission, here are some screen shots from tonight's charts, on a couple well known stocks. 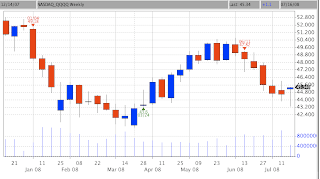 In case those annotations on the QQQQ chart are hard to read: 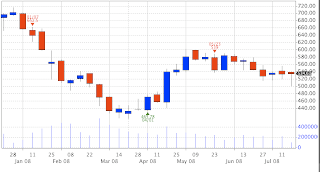 Yet another home run?

I'm checking out this system and loving it.

Allan, I've made millions off of your picks and investing with you. Is there an SEC limit on how much $$ an investor can make with a SINGLE advisor?